OK, what really happened at USC?

Share All sharing options for: OK, what really happened at USC?

There has been a great deal of gnashing of teeth about the performance againt USC. There's been a lot of blame going around, and rightly so.

But if you have not already done so, go read Ken Woody's recent breakdown of the Oregon defense. The guy is on the money almost all the time, and this is no different. He breaks down a lot of what has been ailing the Oregon defense, and we'll get into the plays he's talking about.

So let's break this down Hydrotech style. I've picked a few of the "important" plays, including both long strikes from Sanchez, the TD to end the first half (which sealed the game, IMO), and the TD pass that would end the scoring. There are plenty of other important plays that went on, but these were really the ones that blew the game open. It was 10-3 in the middle of the 2nd quarter and besides the big plays, Oregon did a decent job of holding USC to field goals.

I will also add that I was not able to watch the game live, so I do not have a great emotional attachment to this game. Take that for whatever it's worth.

Full breakdown begins after the jump...

First off, the video I had from this game was of really crappy quality. If I make mistakes on names or attribute something to the wrong player, leave a comment.

Let's start with the first big play: a  which occurred on a 4th and 2 from the 34, a 34 yard pass from Mark Sanchez to Damian Williams.

Here we can see the pre-snap configuration. It's a fairly simple man coverage scheme. Due to the fact that it's fourth and 2, all the safeties are up near the line, farthest back is Ward who is lined up on the tight end, with Chung facing the slot man. 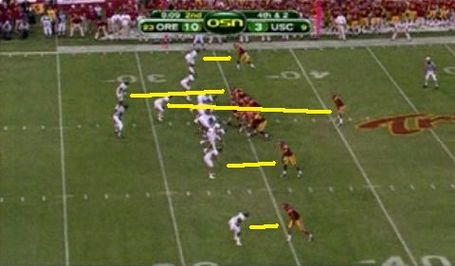 After the snap, Sanchez goes straight back to pass. The outside man runs a little slant/curl thing while the slot man loops outside. Unfortunately, this causes the safety and cornerback to near each other. 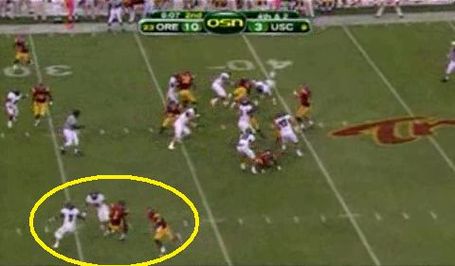 Then disaster strikes. Instead of avoiding each other, both players run into each other... 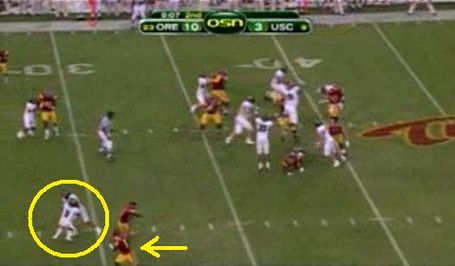 Both players run square into each other as Williams is off to the races. Despite the pressure, no one gets to Sanchez in time... 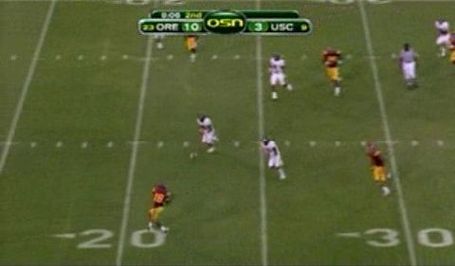 And no one can come close to stopping Williams.

Now, this was truly an instance of putting our defensive backs on islands. But on 4th and 2, do you really do anything different. There was no threat of a pass, and the DBs just ran into each other...

The second TD pass was a much different scenario, but same result was the same. 1st and 10 and a 63 yard touchdown pass to Ronald Johnson.

Pre-snap fairly standard, with safeties deepish on 1st down. Oregon is running a pretty standard 2 deep zone, though that won't be apparent until the play starts. 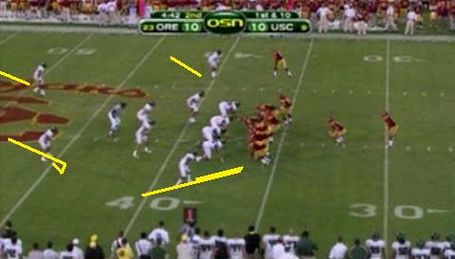 After the play starts, USC fakes to the running back, drawing in the linebackers and Chung, as well as Byrd, while Ward drops deep (off the screen) immediately. This shouldn't have been problematic. There was no receiver deep on Chung's side, and the TE was still covered in the middle. The only receiver was Johnson. The only thing that could have been done is that because of the play-action and drawing in Byrd, Johnson was able to get into the deep field without any obstruction. 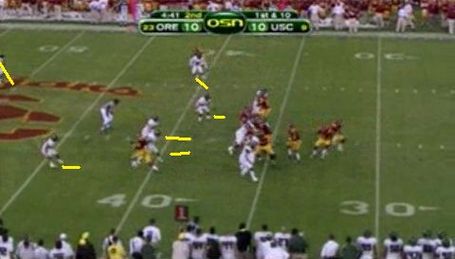 Everyone proceeds down the field, and Johnson turns around, like a deep curl. This is covered underneath...but... 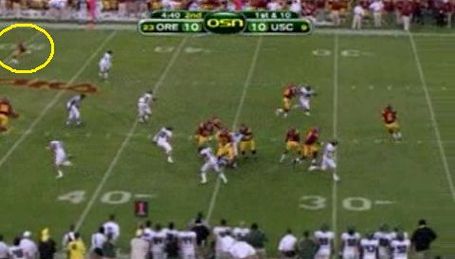 From the other angle, we see that Ward bit...hard. He took a step outside, when Johnson made his stutter step... 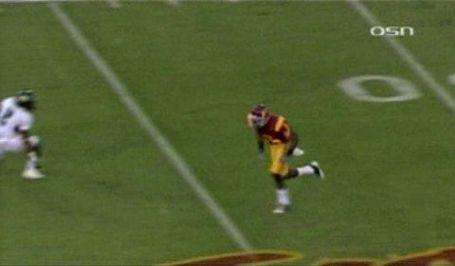 And just like that Ward, the deep safety, is beat. 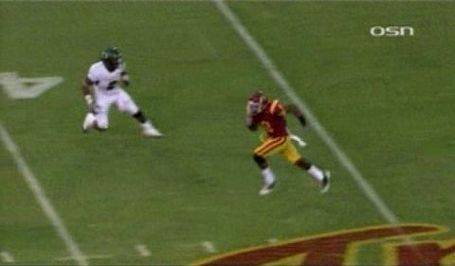 Johnson has speed on him anyway, and Chung (running hard the entire play) ends up much closer to him as he catches the TD. 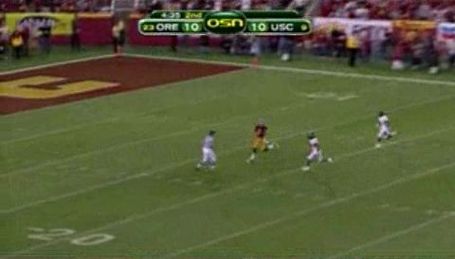 Again, a new scheme, and still failure. Sanchez had a tiny bit of pressure from the end, but all he had to do was step up and he had all the time in the world to throw. Simple put, Ward completely failed on this play.

The last play I'll cover is the touchdown right before half, another pass, this time caught by Patrick Turner.

Again, this is a pretty simple formation. 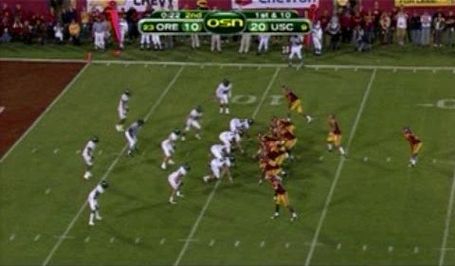 Oregon rushes 4, gets no pressure whatsoever to speak of, and Byrd bumps/holds Turner as he makes his way up the field. At this point, there seems to be pretty good coverage all around. 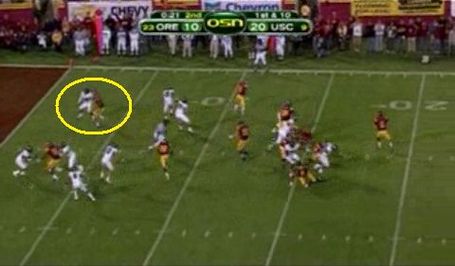 Unfortunately, Byrd gets turned around as Turner cuts out, he gets a bit of position, and Sanchez throws a great ball through traffic, and Turner makes a great play for the score. 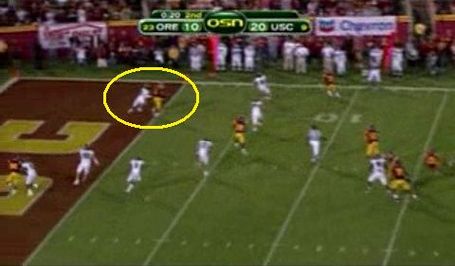 I'm not sure if a whole lot can be taken from this play. Byrd got beat by enough and Sanchez and Turner made a play. Props to them.

One other note, the other long Touchdown pass at the end of the game was horrible play by Byrd. There was one safety deep on the other side of the field, and Byrd was just run past. This could have been because he wasn't expecting it late in the game, or whatever. Byrd shouldn't have allowed himself to get beat on this, as good a cornerback as he is. Unfortunately, the camera work on OSN was shoddy (shocking, I know), and the play was cut to as the receiver was running down the field.

So, what can we take from all of this?

I don't feel these breakdowns are necessarily the culprit of simply leaving the secondary on islands. In the biggest play of the whole game, this was not the case. Yeah, there were times with man coverage that led to touchdowns, but in the two man coverage 2nd quarter touchdowns, the secondary has to make those plays if our defense is going to be successful at all.

Really, in the BSU and USC games, the deciding factor was the explosion plays. USC had 3 touchdowns that could be counted as those, and got a 4th touchdown in right before the half, which was an absolute backbreaker.

Overall, I agree with Ken Woody when he talks about what "simplifiction" is:

The safeties, too, need more time (space, depth) to correctly read what’s going on. I would have my safeties 15 yards deep with 2-deep coverage and the free from12-15 in three-deep, quarters, and man coverage. The current secondary is much better than three-four years ago, when you would never see a free safety helping a corner on a deep pass, it seemed everyone had their backs to the ball when the ball came down to the receiver. The Ducks made an interception against Purdue when TJ Ward was deep enough to break on a ball thrown over the middle. If you watch the Beavers, who play great defense, look at the depth of their free safety and how many times he is in a position to break on a ball in front of him---like the td interception against Utah. The corners need to jam the receivers and not give them easy releases, both down field and inside.

We haven't been jamming receivers well on zones (blame the play action). And we haven't been covered receivers one-on-one. When both fail, and you can't get pressure, you are going to have a very long day.

But, despite the problems of the USC game, I'm opptimistic. Oregon did a decent job in tough situations against USC holding them to field goals. Yes, a lot of yards were gained, but beyond a few bad plays, Oregon wasn't as bad as the score or yardage looked. If the offense had been able to do anything, it may have been a different story.

But cheer up Duck fans. We won't see any more teams close to as good as USC. They will be better in just about every facet of the game. Oregon is a better team than was seen last week, but we'll have to wait and see just how good they are.