With the football regular season approaching its end, basketball season begins to take shape as the Ducks have started packing Mac Court to the rafters for the run towards a great season. For the men of the hardwood, they hit the road this Friday for their first away game against UC Irvine at the Bren Events Center in southern California. Tipoff at 7:05pm. Bob Olson, Associate Athletic Director for UC Irvine, is in his 27th year at UCI and has agreed to sit down with Addicted to Quack for a Q&A session.

Dominic Vieira (AtQ): Throughout the country, university athletic programs generally have one or two sports that the alumni and fans get really passionate about. Texas has football, North Carolina has basketball...what sport (or sports) do alumni and fans of UC Irvine get especially revved up about?

Bob Olson: It has varied throughout each decade for a university that is relatively still young in its 44th year.  Most recently, our baseball and men's volleyball programs have earned national attention and growing interest from our alums.  We had baseball from 1970-92, then dropped the sport for nine years due to a state-budget crisis.  The program was revived in 2002 and we have reached NCAA postseason play four of the past five seasons.  In 2007, the team advanced to the Division I College World Series for the first time in history and captured the hearts of many fans in Omaha, plus were the darlings of ESPN.  UCI won two games in Omaha that year, defeating perennial powers Cal State Fullerton (5-4 in 13 innings) and Arizona State (8-7 in 10 innings) to become the first CWS team to win back-to-back extra-inning games.  In the win over Arizona State, UCI trailed by four runs in the eighth inning before staging a late-game rally.  With the game tied 7-7 in the bottom of the 10th inning and a man on third with one out, UCI center fielder Ollie Linton came to the plate and virtually all of the 29,034 fans were on their feet cheering "Ollie-Ollie-Ollie," and he delivered the game-winning RBI single to right.

Dominic: Can you give some details on what an Oregon fan might expect going into Bren Events Center to see the Anteaters/Ducks game on Friday? Could you share some information on the "Pack the House" promotion scheduled for the game?

Bob: There is a concerted effort to draw a capacity crowd Friday night for the Oregon game.  Pac-10 teams don't often travel to Big West Conference schools, so it is an opportunity our university is excited about.   Many students on campus this year seem to have a genuine interest in our athletic programs and have already been supportive at many of our events this fall. 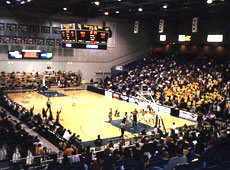 Dominic: Oregon's basketball spirit group is called the Pit Crew and is known for some fairly raucous behavior at times. Can you give us a little information about the CIA (Completely Insane Anteaters) and what they add to the atmosphere during UCI games?

Bob: The CIA strives to be a strong, representative showing of the student support.  They want to provide the Anteaters a strong home-court presence by standing for the entire game and doing what they can to annoy the opposition in hopefully, a reasonable but creative fashion.

Dominic: For the Oregon fan that may not follow UC Irvine's basketball program, what impact players for the Anteaters will provide the biggest challenges to Oregon during the game?

Bob: With so many new players (eight) in the program this season, it is difficult this early to identify 1-2 players who will be the ones to watch, but I would keep an eye on junior guard Darren Moore, junior center Zack Atkinson, junior forward Chad DeCasas and junior guard Michael Hunter.

Dominic: What is the greatest sports moment at UC Irvine and what was the backdrop for the event?

Bob: It is not necessarily a moment, but a day.  On June 18, 2007, our men's volleyball team was recognized for its national title at the White House with President Bush saying "Go Anteaters!" on national telecasts. A few hours later, our baseball team eliminated Cal State Fullerton from the College World Series, 5-4 in 13 innings, on ESPN. There were many proud alums throughout the nation (and world) that day.

Dominic: In reference specifically to basketball, what style of play do the Anteaters use against their opponents? Are they more of a "run and gun" style of team or do they employ more of a half-court, slow you down style of offense?

Bob: We are mainly a half-court team but will run when the opportunity presents itself.  Our program is traditionally one of the strongest defensive teams in the Big West Conference.

Dominic: Give us some insight into Pat Douglass, head basketball coach for UC Irvine. What kind of approach does he take towards coaching men's basketball?

Bob: Coach Douglass, who is in his 12th season and is UCI's career leader in victories, was a hard-nosed guard at the University of the Pacific in the early 1970s and he has carried that over to his coaching days.  He is an intense coach who likes to win whether it is basketball or on the golf course in the summer.  One of his college teammates was current Pacific head coach Bob Thomason and another classmate was current USC head football coach Pete Carroll.

Dominic: UC Irvine, as an educational institution, is ranked in the top 50 as one of the best national universities in the country by US News and World Report for 2009. What kinds of things does the athletic department do to help their student athletes balance their athletic life with their academic life?

Bob: The UCI Athletic Department has developed over the years a comprehensive academic support system for our student-athletes.  We have a strong Life Skills program and offer resources such as study table, tutors, a Learning and Academic Resource Center, Career Center and Counseling Center.

Thanks to Bob Olson, Associate Athletic Director at UC Irvine as well as Stacey Shackleford, Assistant Athletic Director (Athletic Communications) for taking time out of their very busy schedules to address the Addicted to Quack readers!

Mr. Olson also reminded me that the Oregon Ducks baseball team will play at Anteater Ballpark on April 20th and April 21st, 2009. Judging by the success that UC Irvine has had, it will be fun and exciting series down in southern California. 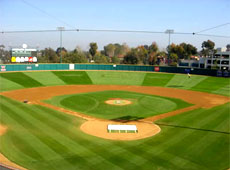