Share All sharing options for: Oregon vs. Kansas State: A Look Back at 2007

The 2007 Oregon Ducks Men's Basketball Team had a group of seniors that were highly recruited with equally as high expectations. The 2007 Kansas State team had one of the best forwards in the game last year in Michael Beasley. How would the game play out? It would prove to be one of the best wins in Oregon history

Oregon came into the game at 5-1, ranked #17 in the country. The Ducks had come off a great outing, beating San Francisco 110-79, and matching the 6th highest score in Oregon Ducks history, averaging 93.2 points per game. Balance was the name of the game for the Ducks who had 7 players scoring in double figures. Kansas State, by contrast, was still looking to find itself. They came into this game at 5-1, just like Oregon, and were led by power forward Michael Beasley, averaging 26.5 points per game. The Wildcats were the "Michael Beasley Show" and everything rolled through him.

Oregon got off to a shaky start. The Ducks were 3-15 in 3-point field goals in the first half but battled back against a crazy Wildcat crowd to force the game into overtime. With Aaron Brooks gone, Joevan Catron and Tajuan Porter stepped up, scoring 15 and 14 points respectfully. Experience seemed to be the difference in the game as Oregon had 4 starters returning from the previous season.

With Maarty Leunan getting 3 offensive rebounds at the end of regulation and hitting a free throw to send it into overtime, Kansas State forward Billy Walker just couldn't hold it anymore. Bryce Taylor and Joevan Catron put the Ducks ahead in overtime and never looked back. Oregon would move on to 6-1 with a huge win on a national stage 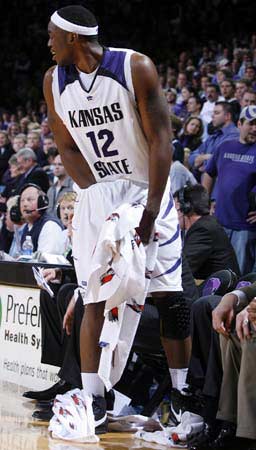