I mentioned the last time I made one of these, that I would put together more about the defense when they had a dominant performance. Well, after 3 games where the only real points they have given up is a field goal to UCLA, I figured the Green Speed deserved another one (I saw a comment about what should we nickname this defense...I am going with Green Speed).

The main theme of this post is going to be the continued progression of this defense in their 3-4 formations. One thing I noticed Aliotti do a lot more of in the UCLA game was the way he would present a formation to the offense, then change who would blitz, making it near impossible for the offensive line or the young QB to be able to pick up any consistencies and be able to react.

If you look at the first couple of drives of the Bruins, it was their ability to run it up the middle that helped them move the ball. When you play against a 3-4 (like Oregon's) the main weakness is the power run up the middle. Obviously, Norm Chow knew this and was looking to exploit it (which makes me fear Stanford more than any team in the Pac-10). The problem with that offensive scheme is, once you get down in points, it is tough to continue to play the conservative run up the middle and chew up the clock when you need quick scores to get back in the game.

Once, Oregon came out and scored 3 quick times (3 TD's in less than 4 minutes...that was cool) Chow had to have his offensive scheme and throw more...and that played right into Oregon's defense. The images below are cut from a youtube clip ( http://www.youtube.com/watch?v=AtEC7sEW-4E#movie_player ). Feel free to watch these plays in real time and witness the awesome speed of this Oregon defense.

Kenny Rowe and Casey Matthews are both going to blitz from this set up. Matthews though, is going to make it a delayed blitz. This allows Rowe to engage both the Tackle and the Guard. 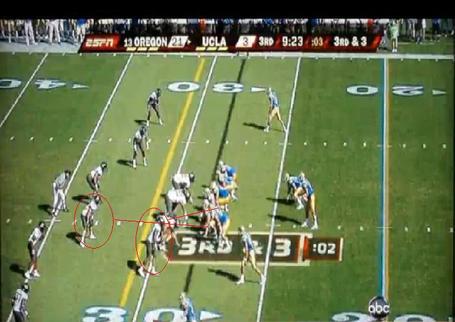 Rowe initially takes on the LG and LT, but once the LT sees Matthews coming on a delayed outside blitz, he peels off of Rowe to try and slow down Matthews. Unfortunately, Rowe is then able to squeeze between the Guard and Tackle and gets to the QB. Result -Rowe Sack 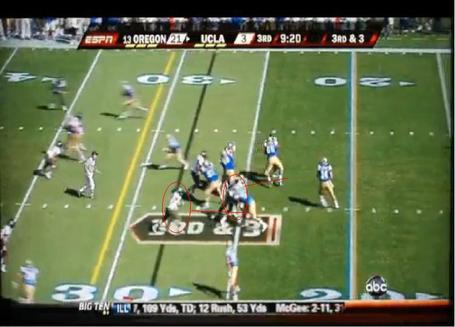 This is the same formation as #1 only this time Rowe and Matthews are going to blitz at the same time. Once again, Rowe engages the Tackle and the Guard and drives them into the middle of the line. 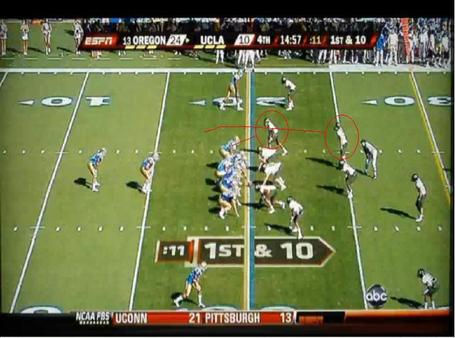 This time however, the Tackle doesn't have enough time to peel off of Rowe and slow down Matthews and Matthews is able to get to the QB and welcome him nicely to the Pac-10. Result - Matthews Sack 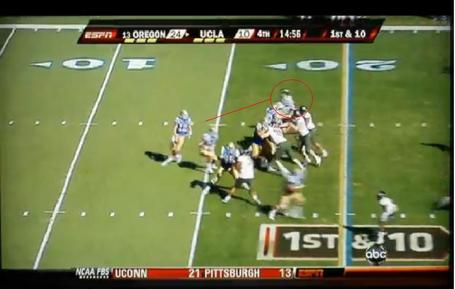 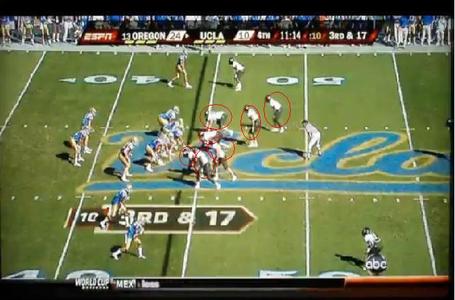 Now, UCLA does a nice job of keeping 7 guys to block in this situation. Unfortunately, Matthews is too fast and runs right by the Right Guard and gets to the QB. Result - Matthews Sack 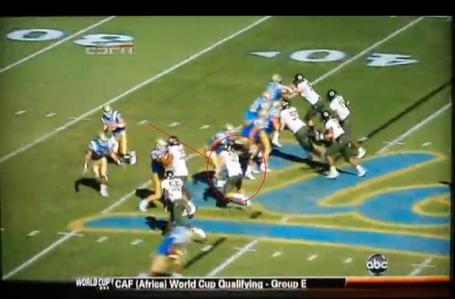 Here again, the ducks bring the front seven up to the line of scrimmage. Only this time it is 4th and short, so UCLA is going to do the smart thing and release the RB out of the backfield as an outlet in case Oregon blitzes. Ooops 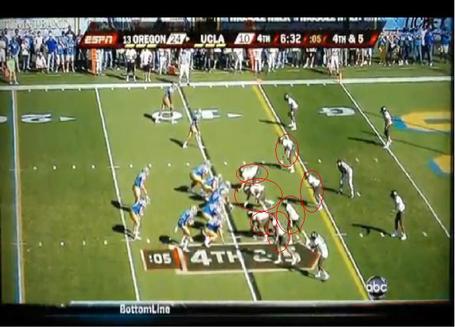 Kenny Rowe (either instinctively, or by design) peels off the blitz and gobbles up the RB as an outlet. The QB has no option but to look elsewhere, only he doesn't have enough time. Once again, Matthews is too fast and gets to him before he can look to the other side of the field where there is one on one coverage. Result - Matthews Sack 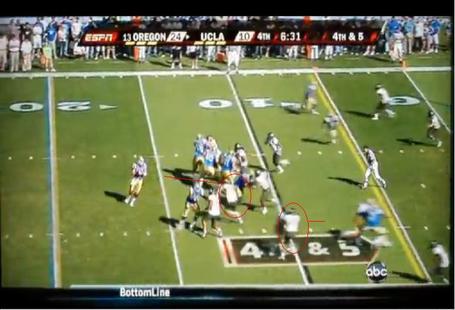 This formation is a lot like #4 only this time Oregon is in a 3-3-5 formation with Pleasant at the top of the screen lined up on a slot WR. Highlighted in green is a twist that UCLA hasn't seen yet during the game, that is Javes Lewis has snuck up from his safety position and is now 2 yards from the line of scrimmage. As you will notice, it is near the end of the game (2 minutes to go), so it is a given that UCLA is looking to pass on 1st and 10. 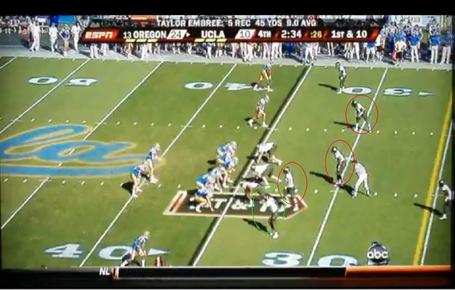 Here the defensive linemen do a stunt , bringing the attention of the Right Guard and Right Tackle to the middle of the line. Once again, Matthews blitzes on the outside, but this time he is picked up by the RB who is being kept in for protection. 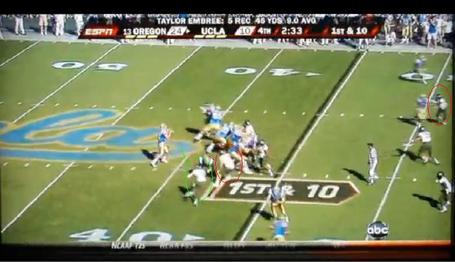 Unfortunately, there is no one left to pick up the super fast Lewis who is flying in from the QB's right side. The QB has just done a pump fake and is looking to hit one of his WR on a deep route...except POOOOWWW!!!!! Lewis crushes him. Result - Lewis Manslaughter (sack and forced fumble) 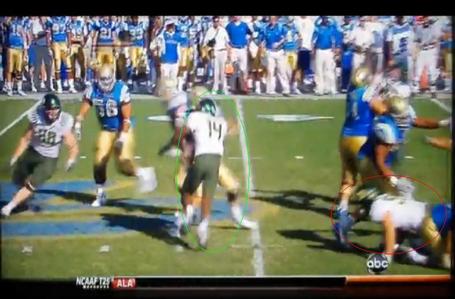 Another great twist at the end of the game when Aliotti and the defense know what UCLA is trying to do.

I have been adamant for years that Aliotti has been too predictable and stale with his defense. Oregon has consistently had a good offense that could put up numbers, while the defense has allowed too many big plays and allowed the other team right back into the game. Some will say it's because we've never had a lot of playmakers or athletes on the D side of the ball. I disagree. Oregon has put a lot of D players into the NFL in the last couple of years. I believe it is schemes and adjustments to those schemes this year that has made this defense one of the best in the Pac-10.

The D has kept us in, and helped win, a number of games this year, and if they keep up this kind of misdirection, and adjustments they will be a force to be reckon with in the Pac-10.

As always, leave me comments and questions about this. I love to hear what the brilliant minds at ATQ think.