Happy USC Week everybody, but we're not here to talk about that.  There are matters of nearly equal importance this weekend, mostly because the Beavers are involved.  A recap of last week's volleyball action and an OSU preview after the jump.  Plus, TINY SPANDEX SHORTS!!!  TINY SPANDEX SHORTS!!! PICS IF YOU READ THE POST, I PROMISE!!!

Traveling to the LA schools is a tough task in basically any sport.  Women's volleyball is no different, as the Ducks went 0-2 last week against UCLA and USC.  Friday night at Pauley Pavilion, the Ducks found themselves down two sets to none against the Bruins, dropping the first set 26-24 and the second 25-18.  The third set was a back and forth affair with eight lead changes before the Ducks, anchored by freshman Katherine Fischer's five kills, pulled away for a 25-22 win.  The fourth set played out the same way, with Sonja Newcombe putting away her eighth and ninth kills of the set for the final two point in a 25-22 win.  The Bruins simply proved too much in the fifth set, winning 15-9.  As much as this loss hurts, the resiliency of the Ducks to come back from a 2-0 deficit on the road will pay dividends as the season progresses.

Coming off a five-set marathon, the Ducks simply couldn't finish off sets, losing by 2 points in all three sets to USC.  Sonja Newcombe had a three-set season high 21 kills, but the Ducks lost in a sweep, 26-24, 25-23, and 30-28.  Coach Jim Moore following the match:

"Our passing was OK, but we didn’t serve well the whole weekend. Sonja really stepped up – I can’t remember a player getting 20 kills and losing in three sets. Neticia also hit .460 today, but only got 15 swings so we have to do a better job of finding her."

The women's volleyball team needs all of our help tomorrow night at 7, when the Ducks continue the 2009 Civil War series with the Beavers of Oregon State.  The Beavers are led by senior outside hitter Rachel Rourke, a 2008-2009 Under Armour All-American honorable mention player.  They come in with an 11-10 record, 2-7 in Pac-10 play, and are currently nursing a 4 game losing streak.  This should be a match the Ducks win handily, but with a rivalry game you never know.  So, if you can, come out and support your Ducks tomorrow night at Mac Court.  You can use this game as a warm up for your vocal chords. 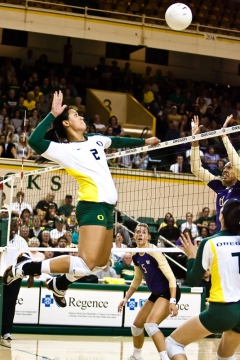 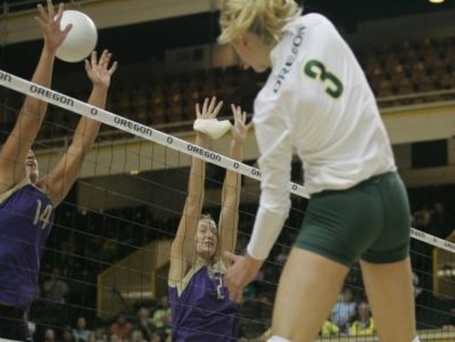 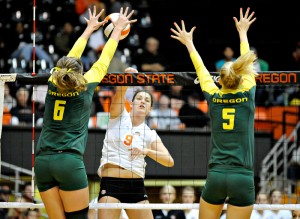 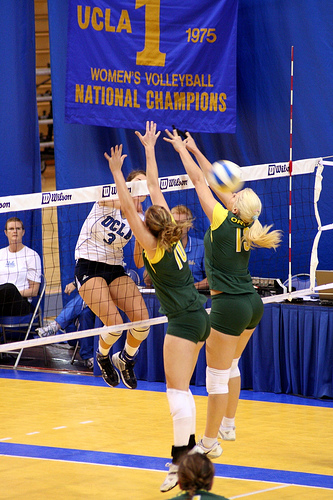