How the Oregon defense matches up to the Arizona Wildcat offense

Share All sharing options for: How the Oregon defense matches up to the Arizona Wildcat offense

For most of the season, we were ranting and raving about the Oregon defense. It seemed like the Ducks finally had a defense to match the offense. The defense helped the Ducks through many tight games, and excelled in all phases of the game.

However, despite that failure, I'm feeling very optimistic for our defense, and think they match up very well with Arizona this weekend.

Arizona has done an excellent job this year, plugging in Nick Foles as a replacement for Willie Tuitama, and Foles has been incredibly efficient, throwing few interceptions, and completing almost 70% of his passes. Yet, his style is very different from Andrew Luck.

Arizona's runs the "Air Raid" offense implemented by offensive coordinator Sonny Dykes. This passing attack is similar to the spread systems run by Texas Tech, and rely on efficiency from the QB position. Arizona also has done a very good job running the ball from their passing formations, and will benefit from the addition of Nic Grigsby, who gets back from injury this week.

In some ways, the Arizoan attack reminds me of the Oregon attack. They do an excellent job spreading the field horizontally, much like the Ducks have done, and run the ball from the same formations. However, they don't have the same commitment to the run that Oregon has, and Arizona has run the same number of running plays as passing plays this season (323 of each).

I have no doubt that Arizona will do a decent job running the ball against the Ducks. Oregon has been solid yet unspectacular against the run this season. However, they have done an excellent job (in every game but Stanford) at getting big plays here and there to force other teams into one-dimensional situations. I believe the same will happen against Arizona. The Wildcats may get some good gains here and there, but it will be only a matter of time until they get into 2nd or 3rd and long situations, allowing the Ducks to concentrate on the Wildcat passing attack.

And when the Wildcat's pass, I like the Ducks chances. First, it's important to note that Nick Foles is not Andrew Luck. Both are asked to do very different things. Luck killed Oregon with the deep ball, and showed accuracy (and a bit of luck) on his deep passes that we likely won't see again this season. Foles does not have that deep threat. In fact, though Arizona has the 2nd best passing attack in the Pac-10, they also have a surprisingly low number of big plays. In fact, though Oregon has roughly 75 less pass attempts on the season, they have roughly the same number of pass plays over 15 yards (45-41 in favor of UA), Oregon has a significant larger number of pass plays over 25 yards (20-12).

This isn't a big surprise, as Foles has not been that accurate when he's gone down the field. But it's also just how the Arizona offense plays. They run a large number of screens and crossing patterns, in an attempt to get one of the many talented receivers in the open field. They find holes in zones, and have a very effective passing game. Without Rob Gronkowski at TE, Arizona just has not had any reliable deep threats, and so they haven't developed this part of their offense.

Yet, I feel that passing game feeds right into Oregon's strengths. After watching the Stanford game, it was clear that Oregon was not truly ready for a deep passing game. While the corners did an adequate job, Luck put many balls right on the money, and though he completed only 60% of his passes, he still average 12.6 yards per attempt. The Cardinal stretched the Oregon defense vertically, and was able to convert enough of the deep attempts to keep the Oregon defense on their heels.

However, Oregon has done an excellent job covering the field horizontally. The Oregon line and linebackers cover the field from sideline-to-sideline as well as any team in the country. They tackle very well on the edge, and any play that does not develop incredibly quickly is able to be chased down by the quick Oregon linebacking corp. Luckily for Oregon, this is the exact type of offense that Arizona runs.

On top of this, some of Arizona's plays do not develop quickly, and it seems that Foles has been slow to make some decisions. For example, in the first offensive play against California, Arizona motioned their FB Chris Grownkowski into the slot, and the pre-snap formation ended up like this: 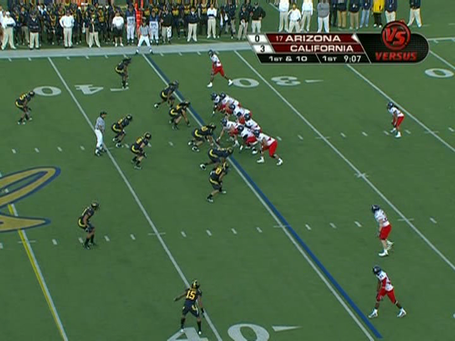 You can see the cushion Cal is giving both receivers on the bottom of the screen. Jeremiah Masoli has done a spectacular job this season reading this at the line and throwing it over the instant he gets the snap. However, as part of a predetermined screen, Foles hesitated for a few seconds before throwing the ball, allowing Cal to react to this, limiting the play for a 5 yard gain. We have seen Oregon take advantage of defenses in this position for 10-15 yard gains over and over this season. Whether it was indecision, or just how Arizona runs their offense, Oregon will do very well against these predetermined plays.

Against Oregon, a team with incredible linebacking speed, this indecision will be very costly. With the type of offense Arizona runs, they cannot afford plays with little to no gain. They have thrived on efficiency. And the Oregon defense is set up very well to disrupt what Arizona has been doing all season.

A cause for concern is also the pass rush, which was not up to par against USC and Stanford. However, Arizona's offense will make getting pressure on Foles very difficult. They simply get rid of the ball too quickly on many of these plays to get to the QB. However, if Oregon can limit the Wildcat short passing game, then it will be open season. The Wildcats simply have not shown a consistent ability to get open downfield, nor has Foles shown the ability to hit them. After giving up 3 sacks last week (all in downfield passing situations), the Wildcats are vulnerable in that area.

I believe that Arizona will have to work hard for every yard and every first down that it gets. Yards won't come easy for the Wildcats, and when that happens, scoring can become very difficult, especially if the Ducks can keep the Wildcat from starting with good field position.

The Ducks defense is set up very well to limit what the Wildcats can do offensively, and I'm excited to see how they perform this weekend.