Let's flip back a dozen years in our Diary of Suckitude, traveling back to a time before Reagan, before Carter, before Ford.. even before Watergate.

November, 1971: Two games determine the fate of a program.

In the autumn of 1971, green fees at Pebble Beach were $20, gas to get there was 50 cents a gallon,  and a fifth of Seagrams VO would set you back $7.85 (Oregon had the highest liquor prices in the nation). The wealthiest American, John Paul Getty, had a net worth of $2 billion. Stylish young men frequented a downtown clothier called The Gay Blade.  Either you smoked ($3.99 for a carton of Marlboros) or your parents smoked or your grandparents were smokers, telephones had dials, you either drove an American car or patiently explained why you didn't, and Oregon's football fortunes were improving.

Autzen Stadium was in its fifth year. The kinks were being worked out on Centennial Boulevard; the mud pit had been replaced with something resembling quality green carpet, and although there still weren't a lot of working toilets, the athletic department was finally able to round up enough HoneyBuckets to satisfy most of the fans, given attendance was rarely close to capacity. It is believed that the game against San Jose State (Ducks, 34-14) was played to the emptiest stadium ever, with only about 14,000 paid attendees.

Up the road, the campus at OSU was still in uproar over a demand in 1969 by famously rotund coach Dee Andros that one of his black players (Fred Milton)  show some respect and shave that damn peachfuzz off his chin (a demand not made of the white players). Milton said, in effect, "Cracker!", and Andros kicked him off the team.  This did not sit well with the members of the Black Student Union, who organized a general boycott.  Andros had trouble recruiting black players for years afterwards. Since Corvallis wasn't exactly Tuscaloosa in those days, that didn't bode well for the future.. and Andros was on his way to the first of what would be 26 consecutive losing seasons for the Beavers. 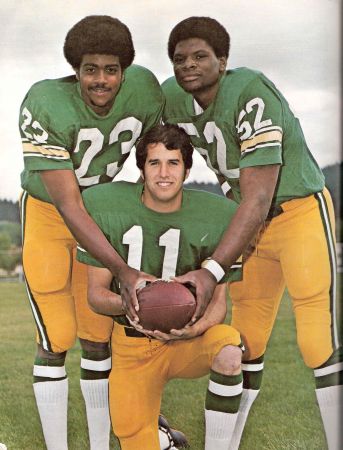 In those days, a problem with the Ducks was that although they could recruit good players, they couldn't recruit enough of them, and had to fill the roster with a lot of in-state players, who were, relatively speaking, about as good then as they are now. Thus the two-deep was more like a two-shallow. And the talent was all in the skill positions; other than Tom Drougas, there wasn't an all-conference caliber player on either side of the line.

But, with two games left in the '71 season, the Ducks stood at 5-4, including brutal road paycheck-game losses to eventual national champion Nebraska and Texas. They had the Pac-8's leading rusher in Moore, the leading receiver in Glass, were coming off an upset on the road against Air Force, and were coming home for two games. Beat Cal, at 4-5 but on probation, and OSU -- both at Autzen -- and at 7-4, maybe you don't get a bowl bid, and Moore's going to the NFL, but you have good momentum and lots of talent coming back for Dan Fouts' senior year.

That was the plan, anyway. But one of those in-state kids who got away helped do in the Ducks on a dreary November afternoon. Cal's Steve Kemnitzer, a fullback from Klamath Falls, ran over the depleted and undersized Oregon defensive front, on seven straight plays late in the game starting at the Duck 28 yard line following a Bobby Moore fumble. Cal punched in the winning touchdown from the 4 with just 10 seconds left. Ducks lost, 17-10.

The two-year-old AstroTurf, laid in '69, had a reputation for becoming a skating rink in cold and wet conditions. That day, it was really cold and very wet. The Ducks turf cleats couldn't get traction; players lost footing, fumbled, and complained. Fouts blamed the conditions and turf for the fact that he spent much of the game hurrying passes or being chased by future pro Sherman White, who had some epic battles with Drougas. "That Astro-Turf gets soggy and it lays right down.. They couldn't get any traction," Fouts griped. (Of course, Cal was playing on the same field, but as a Bay Area native Fouts probably understood something about wet and cold conditions.)

So, at 5-5, Oregon faced 4-6 OSU in the Civil War, a game they hadn't won since Mel Renfro was playing. Seven straight years of eating first Tommy Prothro's, then Dee's dust. And, if you think losing to OSU twice in a row from 2006-2007 was unbearable, imagine if that string continued for five MORE years.

With all the reasonable successes the team had -- and coach Jerry Frei had made progress each of his previous four seasons, going 6-4-1 in 1970 -- in 1971, as in every season, beating OSU was The Only Thing That Mattered.

And the Ducks were limping into the game. Bobby Moore didn't play (thigh). FB Greg Herd and WR Johnny Kerr were injured in the 2nd quarter. Bill Drake was tossed following a personal foul.  The teams pitched an epic battle, judged by many as one of the best games they'd ever seen. There were six lead changes, four in the fourth quarter alone, with OSU finally taking the lead for good late in the 4th quarter on an option run by QB Bill Carlquist. Fouts couldn't pull off the two-minute drill to get the Ducks in position for a field goal.

After the game, there was no pressure on Frei to change. Honest.

"As far as I'm concerned, Jerry Frei has the same relationship at Oregon that John McKay has at USC. Jerry Frei can be our football coach for the next 15 years if he wants.

"This is one great man. We've come a long way in four years and it was obvious today."

And Frei had the backing of his players, or most of them. Earlier in the week, WR Larry Battle had quit the team in a dispute over playing time. There had been rumors that Battle's roomie, Greg  Herd, had quit the team as well. Herd shut down the talk. "I'd rather play for Jerry Frei than any other coach in the nation."

According to Herd, Frei was someone you could go in and talk to. "I'm not sure that white players can talk to Dee Andros, let alone any black players." Ouch.

So, Frei was apparently safe.. but the alumni -- including some Influential Alums with Money -- were grumbling. And it didn't take long for "Jerry Frei is our John McKay" to turn into "Coach Wanted."

The Influential Alums with Money thought the offense was too conservative. For some reason, George Seifert got the blame, even though he was just an assistant to John Robinson. No matter; they wanted Frei to sack the entire staff-- except for offensive line coach Dick Enright. Clearly, the Influential Alums With Money were excellent judges of coaching talent, far superior to Frei as evaluators of talent.

Here's a rundown of Frei's incompetent assistant coaches, and how they would eventually fare in life:

Except for Enright, this was, clearly, a group of mush-brained slackers. Convinced in their righteous cause, The Influential Alums With Money took their case to the media, then as now the best way to tell your story without getting your hands on it. The media -- the Eugene Register-Guard and the Oregonian -- did its job, reporting that Frei was under pressure to make staff changes.

Showing an unwillingness to capitulate to the insane rantings of idiot donors, Frei refused to sack his coaches for no damn good reason. When pushed, Frei pushed back. Ritchey called his bluff. But Frei didn't have much to lose, as he was on a one-year contract.

Miffed at the media speculation, hung out to dry by his boss, Frei resigned, sparing Ritchey the opportunity to run him through with the sword Ritchey had promised to take himself. "I reluctantly reached the conclusion that in the existing atmosphere of rumor and innuendo as printed in the newspapers, it would be impossible for me to effectively carry on in the manner which I felt necessary to make continuing progress with our program."  Frei moved on to a long career as an assistant with the Denver Broncos, but did show up a few years later, in the midst of the death spiral, to hand out a few neeners.

In an oddly lucid moment for a student body president, UO student leader Iain More said that Ritchey "must have the courage to say to the alumnus who demand 'fire Frei or no money' 'keep your money.' Oregon does not seem to have arrived at that point yet." (Frei was merely 14 years or so ahead of his time.)

The timing couldn't have been worse for the school. Richey wasn't playing with a full budget, so -- although several candidates were brought in for interviews, household names like Spike Hillstrom, Dave Levy, Carl Selmer and Darrel Mudra -- they couldn't get any candidates who looked any better than what they already had on hand.

Ritchey gave Enright a four-year contract.. something he hadn't earned, and that Frei never received.

In '72 Enright went 4-7, and beat OSU 30-3 at Parker Stadium in a game that wasn't that close -- the most memorable moment occurring when Oregon fans tore down one of the goalposts while two minutes remained in the game.

But you can't just win the CW once and survive.

It was a good thing the UO athletic department wasn't taking signups for refunds. Skill and dexterity haven't kept pace with inflation in college athletics.

If you paid $8, then the wife has one coming. The next time she wants to buy an $8 potted plant, take it with a smile. Chances are, after all, the thing's alive.    -- Blaine Newnham, Eugene Register-Guard

Oregon paid Enright $47,250 and said not to bother with the other two years after all. In a typically classy move, Enright learned he'd been sacked when he was called by a reporter for comment.

After spending productive time advocating for a return to one-platoon football while Don Read piloted the Hindenburg, and not commenting while other coaches were arrested for DUII, Ritchey apparently decided he'd done enough damage. He resigned as AD shortly after the infamous 0-5 home loss to San Jose State. Since he was tenured, he still had a job, and finished his career -- appropriately --  as assistant dean in the Oregon phys ed department.

The death spiral had begun.