Much of the talk in the match up between Oregon and Ohio State has centered around Oregon's vaunted up tempo spread attack versus Ohio State's stingy tough-nosed defense.  While I will agree this is an intriguing match up I think the most determining aspect of the game on January 1st will be Chip Kelly versus Jim Tressel.

The contrast of styles, coaching and scheme could not be greater.

Tressel is methodical in his demeanor and approach.  Kelly is quick and decisive in speech and actions.  Tressel is a native of Ohio the state he coaches for.  Kelly hails from the opposite side of the country (New Hampshire) of the team he now coaches.  Jim Tressel was raised on coaching and football fundamentals.  Lee Tressel a legendary small college coach in Ohio, Jim's father, and won the 1978 Division III National Title.  Kelly was raised by an attorney and honed his craft as an offensive coordinator at the FCS "powerhouse" University of New Hampshire.

Tressel has been coaching Ohio State since 2001, and won five consecutive Big-11 titles.  This is his 7th BCS game in 8 years.  Kelly will have been head coach for a grand total of 9 months come January 1st, and this is first BCS and bowl appearance as a head coach...ever.

While their journey to meeting on the field in Pasadena could not be more different, the most striking of all contrasts will show itself as the two teams play.  This is what I feel will be the determining factor to winning the day. 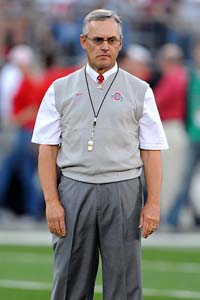 Tressel's game plan is conservative in nature.  He is "Old School" football if you will.  Tressel will rely on his defense to keep OSU in the game.  Ohio State has attempted eight 4th down conversions all year (by contrast Oregon has attempted 20).  Tressel would rather punt and trust his defense then possibly give up field position.  Ohio State is a run first, inside the tackles offense.

Early in the year when Pryor was struggling dropping back and making reads in the pocket, Tressel adapted his game plan accordingly.  He has gone even MORE conservative to minimize the weaknesses of his QB, getting Pryor outside the pocket to make plays with his arms and legs. 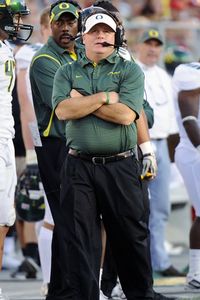 Kelly approaches everything in an unconventional way.  He is organized and detailed, and that allows him to repeat consistently his desired plan at faster and faster paces.  Kelly will look for any and all advantages in his game plan and try to exploit them to the greatest degree.

Kelly's spread offense is unconventional.  Most spread offenses rely heavily on the pass and consistent patterns by the wide receivers.  Kelly relies heavily on the run and creating mismatches on the edges for his running game.  He will use tempo as well as play calling to keep a defense off balanced.  He's taken the spread - hurry up offense, play calling and practices to a different level.

Who Wins the Day

This match up (Kelly's unconventional hurry up offense and zone blitzing 3-4 defense versus Tressel's conservative run first rely on the nickel defense style) will determine the Rose Bowl.  As we have seen with Oregon this year, it is not about "our" system being better than "your" system.  It will be a matter of execution.

Oregon's defense is going to need to execute at stopping the run and putting the game in Pryor's arm to win.  If Tressel is unable to move the ball at will on the ground he is going to be forced to put the game in the hands of Pryor to move chains.

Keeping Pryor in the pocket is another must.  I would be surprised if Oregon blitzes a lot in this game (outside of obvious passing downs).  Much like Oregon did to Washington, the OLB will be forced with controlling the edges and keeping Pryor contained.  Oregon will use the front 5 to stop the run with a little help here and there from Ward.  If they put OSU into 3rd and long situations and keep Pryor in the pocket he is going to be forced back into the type of QB that Tressel had tried to move him away from early in the year.

Oregon's offense is going to need to score quickly and keep pressure on Ohio State.  Making Tressel get out of his conservative offense will take away another aspect of his game plan.  If Oregon scores quickly it will actually hurt Ohio State.  Big 300 pound offensive lineman do not like having to pass block for 3/4 of a game.  They need rest too.  If Oregon can score quickly and keep Ohio State's strength (their defense) off the field and continue to force OSU into obvious passing situations the fatigue of the offensive lineman will show.  Oregon's zone blitz defense really starts to take affect when the players get fatigued.  The misdirection and confusing blitzes are harder for O-lineman to react to, when they are tired.

You could flip each of these arguments for Ohio State's execution too.  Execute running the ball and get into short yardage situations.  Execute on getting Pryor to the outside where he can make plays with his arm and legs.  Execute at making Oregon work to score, and have Oregon settle for 3 instead of 7.

The styles of play and coaching are at such opposite ends of the spectrum in this game.  The execution of the game plan by the players and follow through of their head coach's blueprint will determine the victor.