Share All sharing options for: Open Thread: Oregon vs. Cal

Author's note: For some reason, this post did not publish correctly originally. I'll take the blame, since I was the idiot who likely screwed it up.

The Oregon men's basketball team will try to put a stop to its 13-game losing streak, its longest in 52 years, when it takes on Cal tonight at Mac Court. Tipoff is scheduled for 6:00 p.m. PST. Cal is coming off its third-straight win, an 82-75 win over Bay Area rival Stanford last Saturday. The Golden Bears beat the Ducks in Berkeley last month, 76-69.

The Ducks are coming off an abysmal weekend in Washington. First they got absolutely shellacked by WSU, 67-38. 38?! Oregon's football team scored just three fewer points against the Cougars...IN THE FIRST HALF! Then, on Saturday, the Ducks managed to give up a season-high 103 points to Washington, losing by 19 in Seattle.

But, there's some consolation: The Ducks now rank No. 1 in the nation in strength of schedule. So we've got that going for us...which is nice. 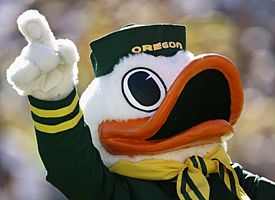