Share All sharing options for: Thank You Ernie! But your Pac-10 Title is in Another Arena: Wazzu 62, Oregon 40

As much as I love the game of basketball, and as much as I love the Oregon Ducks, I am so happy the season is over. In a lot of ways, the game against Washington State summed up all of the feelings I've had about the team this year. Inexperience, turnovers and mental mistakes plagued us through the entire game. We did some things right but we did a lot of things like we have all year. Washington State was the worst possible team for us to play in the first round matchup-wise and not only did they kill us on the court, they just happened to be ending the season playing some of their best basketball. A recipe for a first-round exit. Great. Oregon never led in the game, and even though they made some good runs, they couldn't put together a consistent effort to stay in the game. Here are some thoughts from Ernie.... 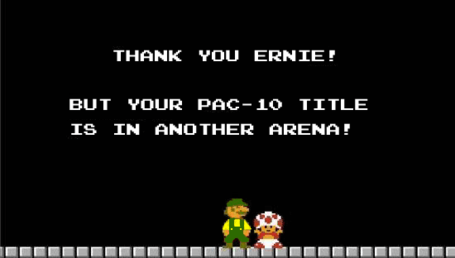 Offensively we were completely out of sync. We turned the ball over way too much. We couldn't score inside. We weren't scoring outside. TP was about the only guy on the floor getting anything done. So many missed layups and scoring opportunities. More so, so many basketball plays on the floor that are there to be made that we're not making right now. With a team that plays defensive like they play, you've got to make basketball plays. We left a lot of plays out on the floor.

A lot of the "basketball plays" Ernie is referring to are hustle and muscle plays from the guys. Going for rebounds was a big factor in the game as the guys were losing battles for the loose balls. Washington State was winning almost all the battles, not just physically but understanding what to do in the exact situation and reacting. Oregon still, even at this late part of the season, isn't reacting to the ball. Too much thinking out there, not enough playing basketball. The Cougars just play solid defense and don't make too many mistakes. When they do make mistakes, you have to capitalize on them and we just didn't do that.

Ernie on the off-season

You get the distinct impression that the off-season road is going to be pretty long for Oregon. Not just for players, but coaches as well. Ernie didn't sugarcoat the issue at all. The team will get a week or two off for finals and rest from the long season. After that, back to work fixing the issues from this season. Ernie implied that they knew a lot of the issues coming into the season. That fact doesn't surprise me as much as why it wasn't publicized more. By whatever force, most fans were led to believe that we would be "ok" and at least be middle of the Pac-10. I'm not sure if this was a bad job of setting expectations by Ernie and crew or whether the media got out of hand in their predictions. Ernie hangs his hat on "winning in the off-season" so hopefully the summer will prove to be a winner for Oregon.

On bringing in a strength and conditioning coach

Now we have an opportunity to change Josh Crittle's body even more so. Michael Dunigan, when he takes off his shirt you probably laugh because he doesn't have any muscle there, any bulk there. We got a chance now to put some muscle, put some bulk on him. Garret needs bulk, Drew Wiley needs bulk. Major bulk on Matt Humphrey(s). Those guys have to get size now, they have to get bigger, they have to get stronger.

When I heard Ernie talking about changing Crittle's body, all I could think of was this. So many plays this year break down to not having the size and muscle to execute. Having the size to go up underneath and get a foul or a bucket without getting the ball stripped will save us 10-15 points a game if not more. I'm not sure why Ernie insists on calling Matt Humphrey, Matt Humphreys but he does it every interview. To be honest, I wouldn't mind having more than one if it meant we had his energy, defense and hot shooting ability.

This is a terrible way to end the season for those guys but as TP did a great job of in the locker room says "You know, my senior year is NOT going to be like this and it starts with the off-season" and it really does. It starts with Joevan, LeKendric and TP. They've got to do a nice job of leading this team, but at the same time we have 3 great players coming in the door that are chomping at the bit just to get in the door. Even those three guys, I told them right now. There is nobody that is protected in terms of a scholarship, in terms of "I've got my scholarship so I'm going to be a starter this year". No no no no no. You have your scholarship and you're going to have to earn your opportunity to get out there on that floor again. TP being the exception to that.

A little competition doesn't hurt. With the recruits coming in next season, it serves us well by pushing the existing guys on the team. Ernie also alluded to the new recruits being able to contribute more right away, not out of necessity, but of luxury. I'm encouraged by what Ernie is saying. He's telling us the right things and seems to understand the gravity of the situation.

Some more interesting facts about the game, Taylor Rochestie was 1 of 5 from the field with 4 points in the game. TP did an awesome job defending him the entire game. His 6 assists was double what the entire Oregon team had for the game. The Ducks had no answer for Aron Baynes. 7 of 8 from the field, 6 for 6 from the line for 20 points. Josh Crittle did not have a good game at all. 3 points, 5 turnovers. Catron seems to have hit some sort of wall. Another tough game for him going 2 of 6 from the field with 3 turnovers.

And just to prove who won the poll from before, if Wazzu only dresses Casto, Forrest, Baynes and Rochestie in the game, the Cougars still win 48-40.