Editor's note: This was too good to leave in the fanpost section. 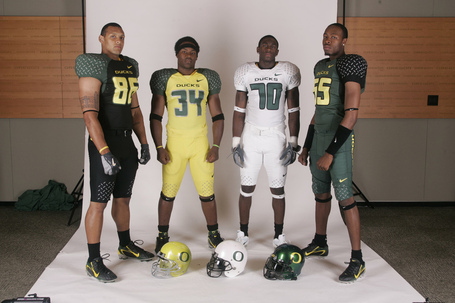 Ah yes, the Oregon football uniform, Chip Kelly vintage. We all are well aware of the numerous combinations of looks the Ducks can bring to the field on any Saturday. But how well have we done with each "outfit" (as our OSU brethren have taken to calling them)? Let's take a look, shall we? The combos are in order of when they were first debuted.

We really like to run the ball in the Green-Black-Black combo, averaging 291 yards per game on the ground, and 321.2 in Bellotti Bold.

The three games in the Green-White-Black combo: 0-3, including the Cal "Beastmode" game and the Dixonpocalypse. The set wasn't used in 2008. Hopefully this is a trend.

The Ducks are 5-1 in games with a uniform set that is all one color. A "Yellow-out" however, has yet to make an appearance.

We need to find something new to wear to the LA Coliseum. We've worn Green-White-White both times and have lost by a combined score of 79-20.

The Green-Green-Black and Green-Black-Green combos are tough to figure out. With G-G-B, you're getting a nailbiter, as in the Oklahoma comeback and the Cal touchback game. With G-B-G, it's gonna be extreme: Arizona 2006, arguably the worst home loss in Bellotti's tenure, and USC 2007, one of the greatest wins in Oregon football history.

We are 0-2 when we only wear yellow and black uniform parts (Vegas Bowl, Boise St.)

I'm surprised we've only played one game in Green-Yellow-Green. It might be my favorite look.

The combos we still haven't seen(excluding the black lid, grellows on the road and white at home):

Now, based on all this research, I will attempt to outfit the Ducks for the 2009 season to maximize their chances for an undefeated season.

@Boise St: Stormtroopers - Our two games in all whites have been stark contrasts: a shootout in Seattle, and a soggy turnoverfest in Berkeley. The Broncos are losing five starters from their front seven, and hopefully we can channel some U-Dub magic and run it down their throats. Plus, all whites on the smurf turf will look effing sick.

Purdue: Green-Green-Green - Our home openers in '07 and '08 were in the full greens, and they were both blowouts. The Ducks threepeat in the greens, putting up 40+ points on the Boilermakers.

Utah: Green-Yellow-Green - This set has only been used once, against Portland State, a 55-12 win. 55-12 over the Utes sounds good to me too.

Cal: Green-Black-Black - With a big early game like this one, it's important to go with Mr. Dependable. The Ducks are 6-0 in G-B-B, and will be 7-0 after the game if another 300+ yard rushing performance is in store.

WSU: Green-Green-Yellow - It's a new uniform set! Let's be honest, we can beat Wazzu by 30 if we play in burlap sacks. Let's take this one for a test drive.

@UCLA: Green-White-White - This might be the toughest road game in conference for the Ducks next year, so let's channel Michigan '07 and 65-38 and do work in the Rose Bowl.

@Washington: White-White-Black - It's time to break the black pants on the road curse, and what better way to do it than by beating up on the Fuskies? For those not so bold, Stormtroopers invade Seattle Part 2 will also get a win.

USC: I'm torn on this one. IMO, the two choices are Green-Green-Black, which should produce around 500 yards of offense and a game that comes down to the final minute, or Green-Black-Yellow, which will produce exactly 35 points. Will 35 points be enough to beat the Trojans at home? The last time the Trojans came into Autzen with a first-year starter at QB to face an Oregon team ranked in the top 10 (which we will be if we're undefeated to this point), they only scored 17. 35 should work nicely then. Green-Black-Yellow it is.

@Stanfurd: Green-White-Green - Last time the Ducks went to the Farm, they wore this uniform set and put up 55 point and almost 600 yards of offense. I'd like another helping of that please. Important note: the Ducks have repeated road uniforms like this twice, against USC and WSU last year. They have never repeated a uniform against a team they have beaten while wearing it.

ASU: Blackout - This ASU team seems like a team that will build confidence with a good start, esp. coming off of such a disappointing season as last year. In last year's Blackout game, the Ducks absolutely blew Arizona out of the water in the first quarter. In the all blacks, the Ducks put ASU on their backs and keep them there for the rest of the game.

OSU: Yellow-Yellow-Yellow - I know what you're thinking. You're thinking the grellows are cursed. We can only beat teams like Utah State in them. And we're undefeated at this point, why risk it all?!?! Here's why: I believe the true power of the yellow lids lies in its pairing with an all yellow uniform. First game in all whites: record setting rushing performance. First game in all black: 45 first half points. We've already broken the black pants on the road curse this year. Let's put these grellows to rest. The Ducks run out in all yellow, the Beavers can't see a thing because it's just too blinding, and the Ducks run up 58 points. Masoli throws for 300, Blount runs for 130, Jamere Holland has 3 TD catches, and WT3 has two picks, and the Ducks are on their way to Pasadena for the NC game.

Bowl game: Green-Black-Black or Green-White-White - We have won our last two bowl games convincingly in G-B-B, and the Ducks were in G-W-W when Joey the Kid beat Colorado in the Fiesta Bowl. All the stars align, Spencer Paysinger breaks both of Tim Tebow's legs on the third play from scrimmage, and the Ducks have a field day with Florida's D. Bellotti starts doing shots in the press box with Uncle Phil and Don Essig in the third quarter.

Of the uniform combos we've never tried, which would you most like to see? Throwbacks aren't an option because I'm thinking it would be the runaway winner.