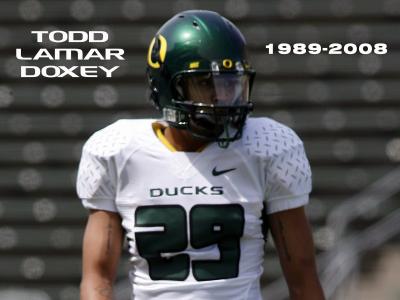 A year ago today...it seems like only yesterday. The news came out that Duck Nation had lost one of its own, just the day before. A fun, relaxing day focused on togetherness and tradition was forever altered by a tragic accident; Todd Doxey had drowned during the annual float on the McKenzie River. The course of the 2008 football season instantly took on new meaning. Today, we honor a fallen Duck. You may be gone Todd, but you will always be in our hearts.

Todd Doxey was recruited by Oregon in the 2007 recruiting class, choosing the Ducks over Washington State. He was a smart kid, maintaining a 3.4 GPA through high school and was the first member of his family to attend college.

The 19-year-old Doxey had joined several of his teammates on Sunday afternoon to float down the McKenzie River. Most of the participants had started down the river in inner-tubes when Doxey apparently decided to jump off the Marcola Road Bridge according to Lane County Sheriff's reports. According to reports, Doxey swam some distance before experiencing problems in the water. His teammates were already downriver and were unable to reach him to render assistance. Another boat coming down the river was able to retrieve Doxey.

He apparently was one of the last to take the 25-to 30-foot leap and started swimming across the current. Witnesses said he suddenly appeared to be in distress and had trouble staying above the cold water.

Todd Doxey was gone, a young life snuffed out before it had the change to blossom.

Phil Knight, out of his own pocket paid for a plane to carry Oregon coaches and players to San Diego for Doxey's funeral where more than 3000 people attended. Football players Dominic Glover, Javes Lewis, Jeff Maehl and Will Wallace, who all enrolled at Oregon as members of the 2007 class with Doxey, helped establish the Todd Doxey Memorial fund

With their help, the Todd Doxey Memorial Fund was established to help defray the expenses associated with the redshirt defensive back’s death. NCAA rules require the university to oversee the memorial fund. Any monies donated that are over and above the permissible expense incurred by the family must, by NCAA rules, be donated to charity.

2 weeks before the Washington Husky game, Oregon announced that they would be honoring Todd Doxey with a specially designed helmet sticker that the entire team would wear for the duration of the year.

Losing Todd proved to be a galvanizing force in the secondary

"It made our team a lot closer," says junior safety T.J. Ward. "Since I've been here, I think this is as close as this team has ever been."

"I'll carry it for the rest of my life," says Ward, who rolls up his right sleeve to reveal a tattoo on his biceps with Doxey's name and the words "Rest in Paradise."

Then he rolls his wrist inward to reveal an older tattoo on the back of that right arm. This one honors Terrance Kelly, a friend and high school teammate who was shot and killed four years ago, days before he was to go to Eugene and begin his college career. "I never thought I would be in that same situation again," Ward says. "Hopefully, you get stronger for it."

Throughout the season, various members of the team wore the Number 29 jersey with no name plate.

Oregon had a successful season and it seemed almost like destiny that they would end up in the Holiday Bowl...San Diego...where it all started.

"I get chills just thinking about that," Oregon senior running back Jeremiah Johnson said. "That's just God working right there. I mean, we could have played in any bowl game. But He put us here so T-Dox could play with us. I truly believe that his soul is in San Diego, so it's going to be like we'll have a 12th man on the field for us."

Oregon would go on to win the 2008 Holiday Bowl, leaving a lasting memory in the emotional chapter of the season. The team had the spirit of Todd that day, coming from behind to beat Oklahoma State. Even though it was time to turn the page, the book of Todd Doxey's life was filled with more than just football. We may remember him as a Duck always but there was more to Todd than just being a great football player.

It's unlikely the many stories of Doxey's generosity would have surfaced this season to the public as a role player in the Ducks' defensive secondary. He was third on the depth chart behind Patrick Chung and Marvin Johnson. How he gave his tickets last season to a boy confined to a wheelchair. How he would sometimes sneak back into his grandmother's house, unannounced as a surprise, when he would return to San Diego from Eugene his freshman year. Every time he would go down his block, visiting his extended family.

TD, you will always be apart of Duck Nation. Thank you for sharing your gifts with us, thank you for the wonderful memories. We won't forget you. Every other day we are ATQ. Today, we are ATD.

"He never walked out of this house without kissing me and saying, 'I love you,'" Gladys Doxey said. "I'll never forget that. My mom used to always say, 'You aren't dead until you forget.' Teeder will never be dead to nobody in this family because we'll never forget him."