Share All sharing options for: Predicting the Season - Purdue Boilermakers 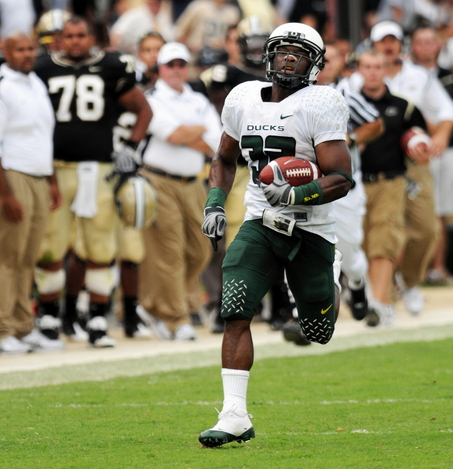 via blog.oregonlive.com. No Jarius Byrd next year but Oregon should have more opportunities like this punt return.

Although Boise State is getting most of the attention from the media, I'm personally looking forward to the 2nd week of the season when the Purdue Boilermakers come to town. BoilerTMill, with the SB Nation blog Hammer and Rails, took a look at the matchup with Oregon back in June. We also talked him into doing a question and answer session in May. Even though the Big-10 has been getting a bad rap the past few years for being "down", there is something exciting about seeing a good, old-fashioned Pac-10/Big-10 matchup.

In 2008, Oregon escaped Ross-Ade Stadium with a victory in overtime as LaGarrette Blount ran it into the endzone for the go ahead score. I wish I had seen it. Back in the early part of the year, I agreed to help out some friends by working at the Shrewsbury Renaissance Faire. It was blistering outside, dusty with no chance for relief. Because I was working the faire, I had to be in costume. Of course, I picked the hottest, most uncomfortable monk's outfit I could find for the event. I sat in my car with the engine on, air conditioning blazing, listening to Jerry Allen call the game on an extremely weak radio broadcast, cursing and banging my head into the steering wheel, honking the horn at regular intervals. At halftime, I had all but given up. I was depressed, weakened from the Boilermaker onslaught, the searing heat and the looks of fellow nerds scoffing at the prospect of someone enjoying a sporting event. I worked a shift at a stage and slowly marched back to the car after 45 minutes just in time to find out that Oregon had come back to send the game into overtime. Heavenly...

With Purdue coming to town in early September, let's take a look at the Boilermakers and how things match up for Oregon

Purdue's defense is similar to Boise State's in that they bring back a very talented and experienced secondary with a very young front seven that hasn't performed well against the run. Because of the other schools in the Big-10 scooping up the majority of the talent, Purdue's approach seems to be taking talented athletes and putting them in position to help the team, no matter what that position is. They are the type of team that might put a quarterback at linebacker if it meant helping the team win. The talent and athleticism is there to defend the spread and the issues it poses. With the team being so young and inexperienced however, there may be some cases of over-pursuit on the zone read and that's where Oregon's offense can win the day. Jeremiah Masoli is firmly entrenched as the starter for Oregon and ended the 2008 season on a tear. If the offensive line can gel quickly, Purdue may be in for a long afternoon on the ground, especially if their inexperience rears its ugly head. Purdue did a great job against Justin Roper last year but Jeremiah Masoli is a much bigger deep threat and with an improved passing game, Purdue's defense will have to respect the passing game which should open up the run even more.

The Purdue secondary is all coming back and is very deep. Even with an improved passing game, Oregon should have some difficulty passing against this veteran group, especially Torii Williams who is back for his 17th year of eligibility. Where Oregon can take advantage is the inexperience of the linebacking core and the lack of depth to create opportunities in the short to medium passing game as well getting to the second level in the ground attack. With all of the talk from Chip Kelly about using some double tightend sets, Purdue could be exposed to these types of plays, especially given the experience and talent level of the Duck tightends. We might see Ed Dickson break out.

The X-factor will be Kwann Short, 6-4, 310lb redshirt-freshman defensive tackle. This guy looks like a future NFL pick. If he turns it up a few degrees, he might cause some massive disruptions early on in the game that could change the outlook of the contest. With Oregon replacing several starters on the offensive line, his play could very well determine how successful Oregon can be executing the offense.

Purdue lost some key players from last year's squad including QB Curtis Painter and RB Kory Sheets. If you remember from last year, Sheets ripped Oregon up carrying the ball 29 times for 180 with 2 touchdowns. Jaycen Taylor, who was going to be splitting time with Sheets last year, should be coming back after missing last season with an ACL tear. Ralph Bolden and new comer Al-Terek McBurse will round out the stable of running backs that should give Purdue lots of options, depending on who has the hot hand. They've all got quickness and can run both inside and outside. Experience may be a factor when you start going down the depth chart but with Oregon essentially rebuilding their front 7, Purdue should have some opportunities to exploit the defense in the ground game.

With Curtis Painter gone to graduation and Justin Siller having academic issues, the job falls to senior Joey Elliott who saw some limited time last year before getting a shoulder injury. He doesn't have a lot of game experience but seems a serviceable replacement for Painter. A lot of what we will see from him will be determined by how good a fall camp he has. It will also depend on what the coaching staff sees from redshirt freshman Caleb TerBush. At 6-5, 222lb with a cannon for an arm, he may very well push Elliott out of the job during the season and should see time against Oregon as a change of pace. Depending on how crazy Coach Hope goes, could we see some double quarterback sets? The pass rush for Oregon should help to pressure Elliott or TerBush into some bad decisions. Will Tukuafu is back on the defensive line and is looking to break out of Nick Reed's shadow but he will be going up against an experienced Purdue offensive line. The injury bug made for a lot of shuffling last year for the Boilermakers but the upside of that is a ton of experience coming back. With a warmup game before traveling to Autzen, you may see them come together at just the right time to help neutralize a rebuilt Oregon defensive line.

The receiving core for Purdue is young and inexperienced but talented. The offensive schemes employed always seem to get the ball into the hands of their receivers and next year should be no different, despite the inexperience. Last year, Purdue dinked short passes all the way down the field and with Elliot back there, that success should continue. Oregon has a good amount of depth in the secondary coming back but defending the passing game was not one of their strong suits. The much-heralded linebacking core for Oregon will have a lot of opportunities to make plays, but it needs to translate to the field and not just practice. Purdue should be able to move the ball in the air in the short to medium passing game but the deep ball shouldn't be a factor in the game given Elliott's arm strength and the speed/experience of the Oregon secondary.

Chris Summers will have the punting duties for Purdue, averaging 38.4 yards per kick last year. He was doing the field goal kicking as well but only kicked 50% last year, causing Tiller to turn to Carson Wiggs. Summers had great success kicking field goals 2 years ago so he may come back to the job. The key is consistency and if I'm a Boilermaker, I don't feel good about having to guess about field goals. Purdue's biggest weakness appears to be in punt return coverage, giving up 16.7 yards per return and 3 touchdowns, one of those touchdowns being Jarius Byrd's 87 yard run. Oregon should have an advantage as returning kicks and punts has been a hallmark of Oregon teams the past few years. The kicking game should be good for Oregon with Morgan Flint coming back but punting is up in the air going into fall camp. Jackson Rice will be looked to for an immediate contribution in punting. If he doesn't stand out as the clear favorite going into the season, Oregon could be in a world of hurt in field position.

I think Oregon fans may be looking at Purdue's 4-8 record last year and be thinking that the Boilermakers will be a pushover. Even though Purdue has some question marks, they appear to be a solid team with several ways to hurt you. There is a lot of potential to couple with inexperience and sometimes that can be a dangerous mix. With Oregon coming off an emotional game at Boise State, the outcome of that game may very well impact how the Ducks home opener will go. Win at Boise State, and it could be a long day for Purdue. Lose at Boise State, and Oregon may come in flat with Purdue able to steal one at Autzen.

A Big-10 team coming into Autzen is always huge but I predicted a win against Boise State and I'm going to predict a win here against Purdue to start us out 2-0. I think the Boilermakers will be able to score but not enough to keep Oregon's offense at bay.