Why the Oregon running game will improve without Blount, at least in the short term

Share All sharing options for: Why the Oregon running game will improve without Blount, at least in the short term

Oregon's rushing game last week was terrible, racking up a piddly 31 yards on 17 carries. While part of this was due to the inconsistent line play, a large part of these problems it had to do with the fact that the line and LeGarrette Blount just did not click, and did not work well with each other.

Blount is a runner that really needs to have a head of steam, when he hits the hole. When given that opportunity last season, he was spectacular. However, in those situations where he was given little room to maneuver (the Cal and USC games last year, and BSU last week), Blount floundered badly. He has proven that he has a lot of problems handling defensive penetration into the backfield.

Our young offensive line had issues, without a doubt. However, there were also openings, which Blount was unable to take advantage of because of his style of running. This season, we won't have the advantage of being able to wait until a decent sized hole opens up. Our lineman, at least in the early part of the year, will not be able to hold their blocks and long, and will let more defenders through. So when a hole does open up, we will need running backs that can take advantage of that.

I believe that LaMichael James and Kenjon Barner will have the speed to do that. Unfortunately, James only had two carries last game, so we must assume a lot, but let's take a look at the position he was in when he got ahold of the ball on the second offensive play last game: 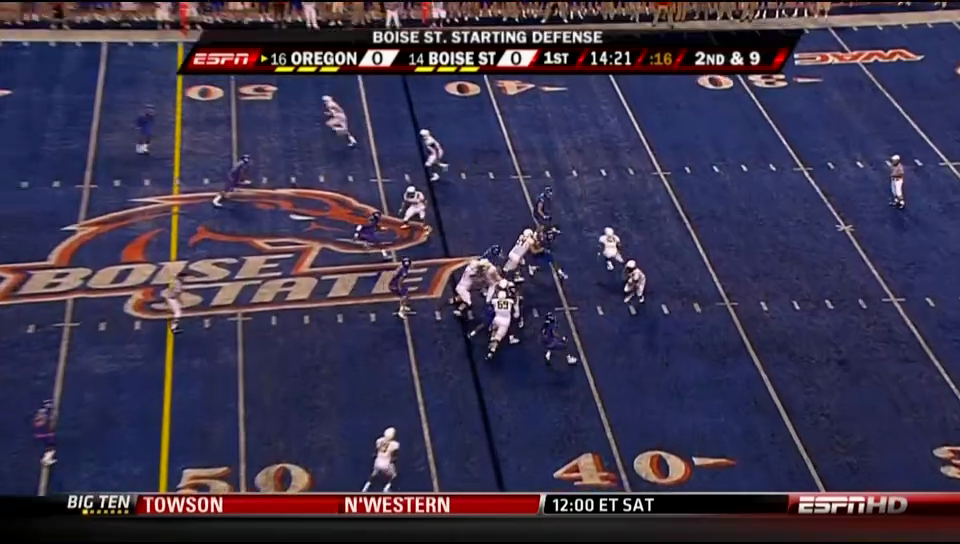 When James got the ball, he was staring down two defenders, one who was beating his man, and one who was unblocked. Yet, he was able to split them with his speed. If Blount gets the ball, there is no way he turns that play into positive yardage. He would simply be too slow turning up the field. We will be seeing these sorts of situations a lot this season.

Over the next few games, while our line is still growing, we will be very dependent on the speed of the running backs, and it seems that this is exactly what we need right now.

However, despite this, losing Blount is still a large blow. I don't doubt that our line play will improve. We have one of the best line coaches in the country and we will see improvement. When this happens, we will miss Blount sorely. His running style was very different from any of our other running backs, and he can succeed when other backs can't, just as speedy backs have abilities he does not. One of the big advantages that Oregon had last year was the two back system that kept other teams off guard. Without this advantage moving forward, as we reach the latter parts of the football season, his absence could grow painfully obvious.