If you are anything like me you have been...uhhh how do I say this..."Pleasantly surprised" by Oregon's defense this year. So my main question began with what's been the difference? I am going to attempt to answer this two ways.

Oregon has trumpeted its much heralded speed on defense throughout much of spring and fall camps. At first, my reaction was, "yeah, I've heard about that before, but if they can't tackle...who care?" Well, after watching the first four games, I am hear to tell you, their speed on D makes a ton of difference. While I will show that the packages that Aliotti has presented this year have been the biggest improvement, it would be all for naught if it wasn't for the team speed on D. You need speed to be able to get through holes, get at the QB, or contain a rusher on the outside with the packages that have been put in.

I think this can be attributed a lot to coaching, work outs and the like, but the biggest addition has been the recruits we've seen come in over the last couple of years, mature and are now ready to play...and they are fast.

Ok, couple of visual aids for this next point. Somebody made a comment about Kelly not having an ego to go to the snap of the football from under center while backed up against our own goal. But, I am here to tell you Aliotti's adaptation of some different packages on D away from his usual vanilla 4-3-4 and 4-2-5 (nickel) has been far and away a more humble move of any coaching move to date. He has adapted his packages to fit Oregon's size and speed to best utilize their skill set, and put away his ego on whether or not it was "his style." 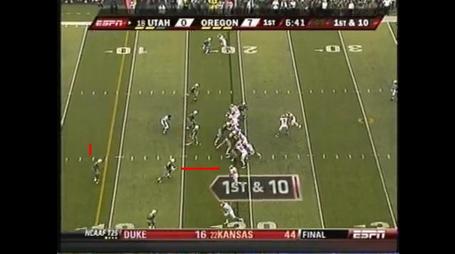 As you can see from this picture Oregon is in their base 4-3-4 (translated, 4 Lineman, 3 Linebackers, 4 Defensive Backs [2 corners and 2 safeties]). Oregon usually uses this set in 1st down situations and also in mid range defensive sets. Aliotti has played the 4-3-4 defense for years. In this set, you can play some zone, some man (Aliotti usually plays man on the corners and zones with a safety and LB) as you can see the corners are playing man with TJ3 playing a little softer on the slot side so that Paysinger can man up with the slot receiver with Lewis' help over the top. This has been Aliotti's base vanilla defense for years. Normally the only adjustment he would make would be to bring in an extra safety (4-2-5) for one of the LB's in obvious passing situations to help guard the pass 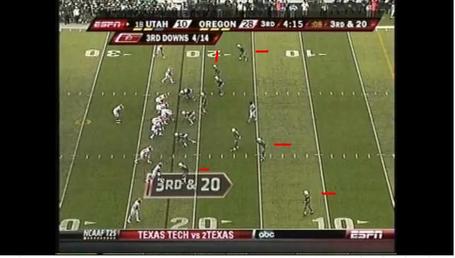 Here you can see the first one. Aliotti has changed for the obvious passing down (in this case 3rd and 20) into a 3-3-5 defense. Here you have Boyett playing deep zone at the bottom of the screen, Thurmond is in his usual tight to the line man coverage, Lewis (third from the bottom) has contain over the top, TJ3 is at the top playing man on his WR (little softer) and the vertical line is Glasper, playing a third safety position on the inside slot.

This package is key because it puts less pressure on the QB with only 3 down line man, but it leaves little room for guys to get open. There are 3 LB's (Matthews, Paysinger and Pleasant) that can cover the short to middle area, but there are 5 DB's to cover a lot of ground deeper down the field. The amazing thing about this package, is that our front 3 have consistently gotten pressure on the QB making him have to read and throw quicker than he would like. Also, as you will see later, Aliotti is still able to blitz from this position because with 3 LB's you can still bring some size.

The speed at LB's is vitally important here, because if they are going to cover more ground from screen passes or slot WR's across the middle, they are going to need to keep up or catch up to faster WR's, TE's and RB's. 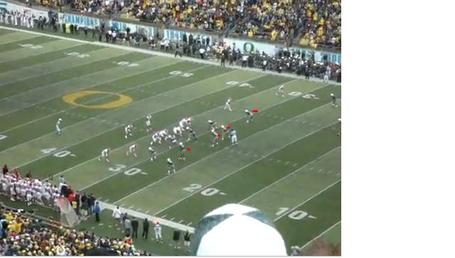 In this next adaptation (3-4-4) I have spotted the 4 LB's. In this case it is (Left to Right) Glasper (switched to LB here sometimes it is Rowe), Paysinger, Matthews, and Pleasant. At first, if you are the QB you think this is again the 3-3-5 deeper zone pass coverage (3rd and 12). Unfortuantely, Aliotti changes things up and decides to bring a blitz. Pleasant leaves his man on the right, Paysinger and Matthews attack the middle and Glasper moves to take away the quick hot route slant to the slot receiver or the quick outlet to the RB out of the backfield.

Here is what it looks like after the shift 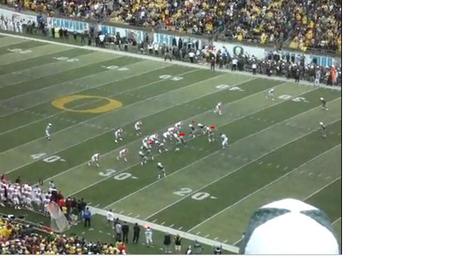 On this play there are not enough lineman (5) to block the now 7 guys right at the line of scrimmage, and while only 6 actually blitz, the D has to try and figure out which one doesn't. Unfortunately for the QB his blockers guess wrong and Matthews destroys the QB!!!!

All in all, there are a lot more variations that can come from this 3-4-4 and 3-3-5 defense then I have time or energy to show. Plus, with Aliotti's ability to change Rowe from DE to LB, and from Glasper to go from DB to LB, there are even more.

My personal opinion is that Aliotti has done a wonderful job of changing from his usual, man to man corners and safeties over the top that leaves huge holes for WR's to find room, sit down, cross and make catches, that the QB is now having to more quickly guess what package the defense is in and make sure the play that is called is right. Also, with the speed of the linebackers they are quickly able to recover to screen passes, bubble screens, slants and hot routes, plus blitz and get to the QB much faster not giving up big chunks of yardage.

Any other thoughts, please feel free to leave them in the comments.