Who are you and what did you do with Jeremiah Masoli?

Share All sharing options for: Who are you and what did you do with Jeremiah Masoli?

We all know there were many, many problems with the offense against Boise State. But I have to say, Jeremiah Masoli looked simply terrible. He looked absolutely nothing like the QB we saw through the latter part of last season. He was indecisive, inaccurate, and had bad pocket presence. Luckily, I feel that these things can be fixed, but Masoli doesn't have much time to get his head on straight.

I'm going to take a look at a few plays that I feel are indicative of Masoli's play. Honestly, there were a lot to chose from. But hopefully these will give you an idea of just what Masoli needs to do to improve.

We'll start with the first 3rd down conversion attempt of the game. It was 3rd and 4 near midfield. During the pre-snap lineup, it a simply look around would reveal that Jeff Maehl (at the top of the screen) was being closely covered 1-on-1 by Kyle Wilson, BSU's best cover corner. On the long side of the field, both Jamere Holland (far bottom) and Ed Dickson (just above him) were being very softly covered by their respective corners. 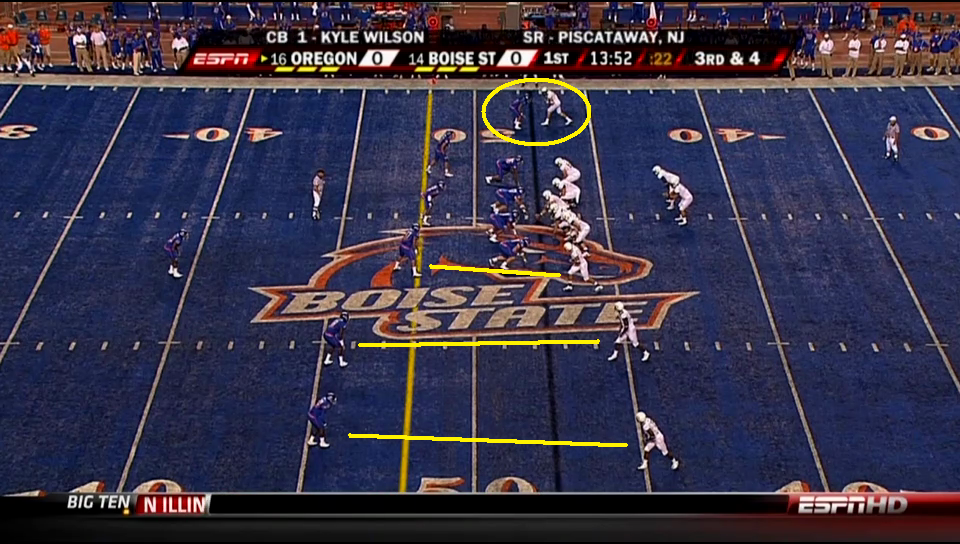 After the snap, Jeff Maehl proceeded to go straight down the field, and was unable to get any separation from Wilson. Unfortunately, Masoli continued to stare down Maehl this entire time, not even glancing toward the other side of the field, where both Dickson and Holland were nearing the first down marker while still being very loosely covered by their defenders. 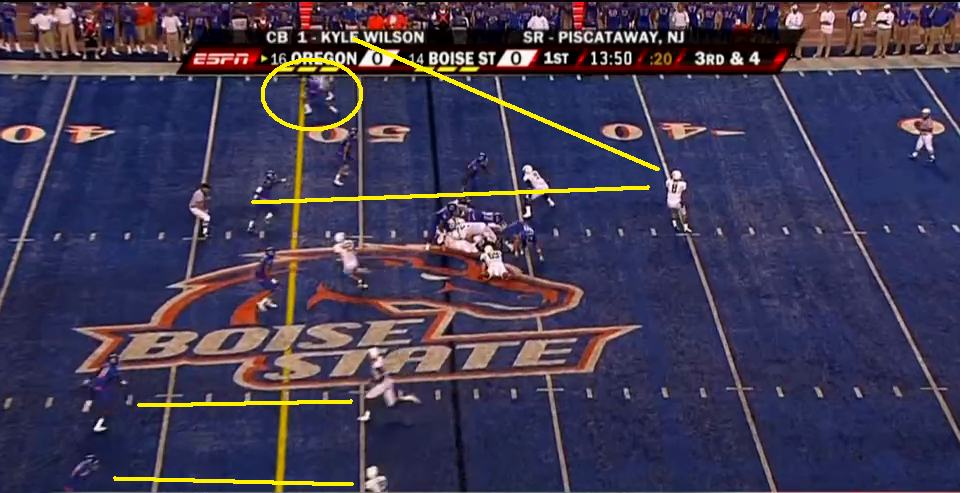 In the final shot, we see Masoli throw the ball toward Maehl, a pass which ends up 5 yards out of bounds, while the entire left side of the field would have seen a fairly simple pass to achieve the first down. What's so frustrating about this play, is that this is a similar defense that we have seen our team run over and over again on 3rd and short situations, yet, the Ducks fail to take the first down that the defense is begging to give our team. 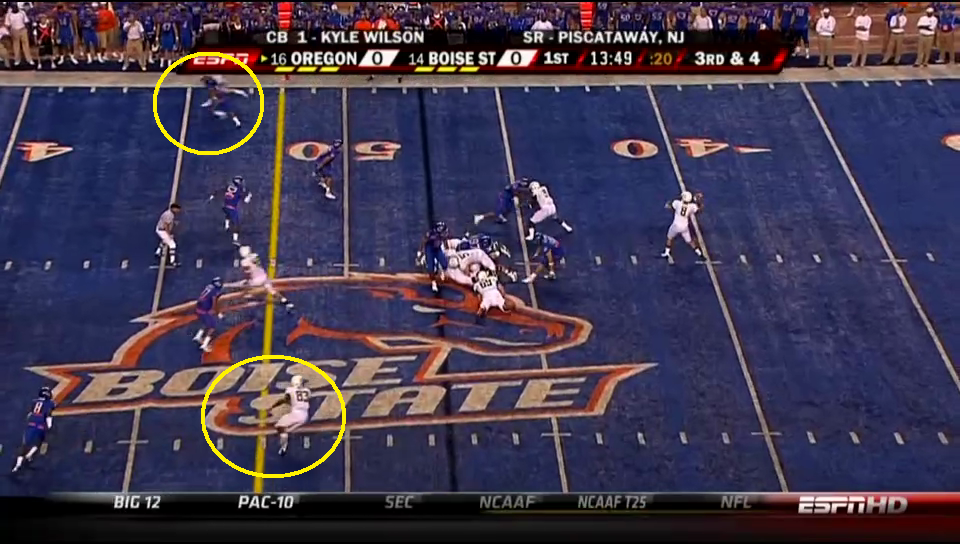 Unfortunately, Masoli showed an inability to look beyond his first option through most of the first half, though he did improve marginally as the game went on. It's also important to note that there were other plays where Masoli simply caved under pressure, looking the opposite of Kellen Moore. Again, improvement happened as the game went on, but Masoli's passing was very rough for much of the game.

However, Masoli's rushing was plagued by indecision. In the second example, we see a play that could become another staple of the Oregon offense. This occurred on the Duck's first touchdown drive of the game. Before the snap, LaMichael James is in motion, in what could become a sweep play to him. 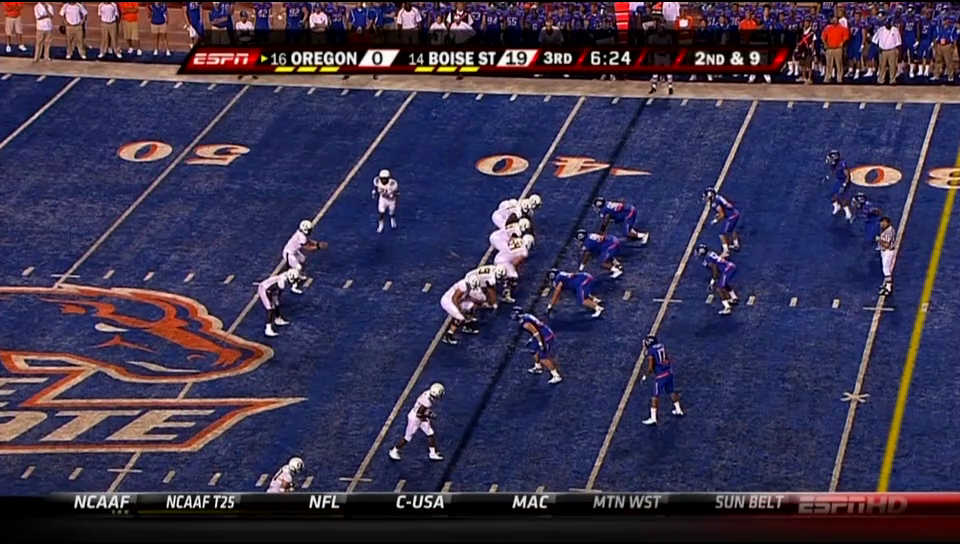 This time though, instead of handing the ball off, Masoli likely seeing a push on the left side of the line, decides to keep the ball and run it himself. 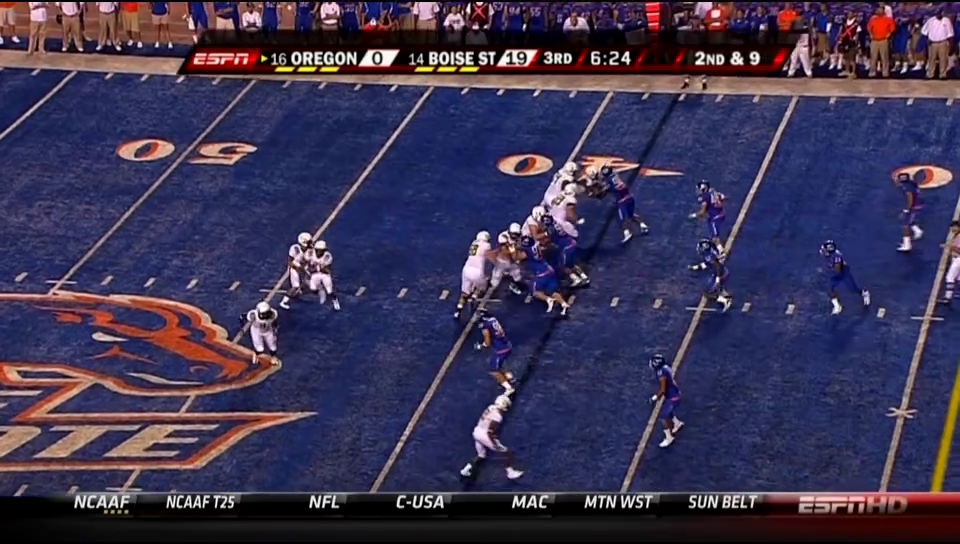 As he runs up the field, the left side of the line actually gets a good push. Dickson, Weems, and Thran are moving up the field against 2 defenders, while Asper, Kaiser and Holmes are holding off the backside pressure. At this point, the play is set up for succes. The only player in a decent position to make a play is the BSU linebacker #52, Derrell Acrey. However, he is caught flat footed from moving to his left, and would have trouble making a play. 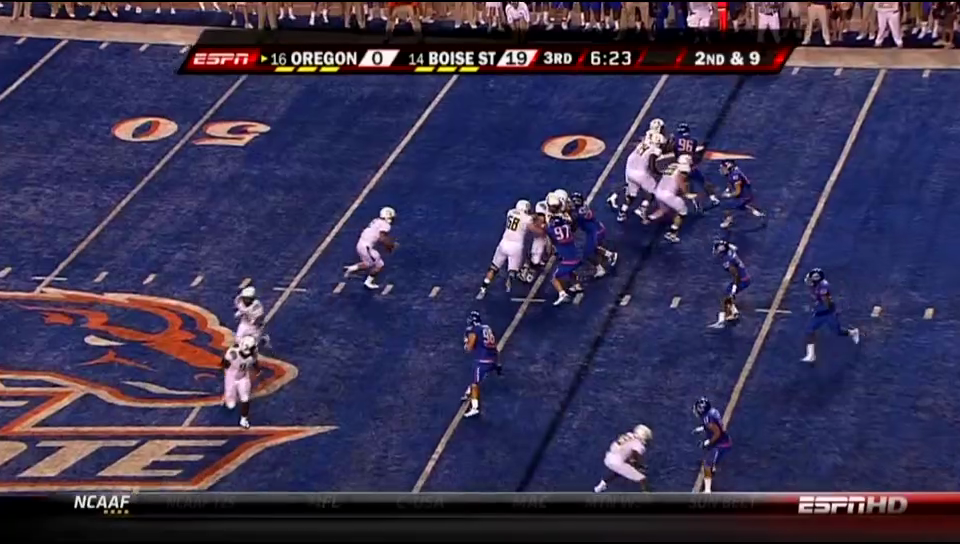 Unfortunately, for some reason, instead of going outside, Masoli stutter steps to the middle, and loses all of this momentum. You can see what this play may have done, as Weems is starting to break upfield. 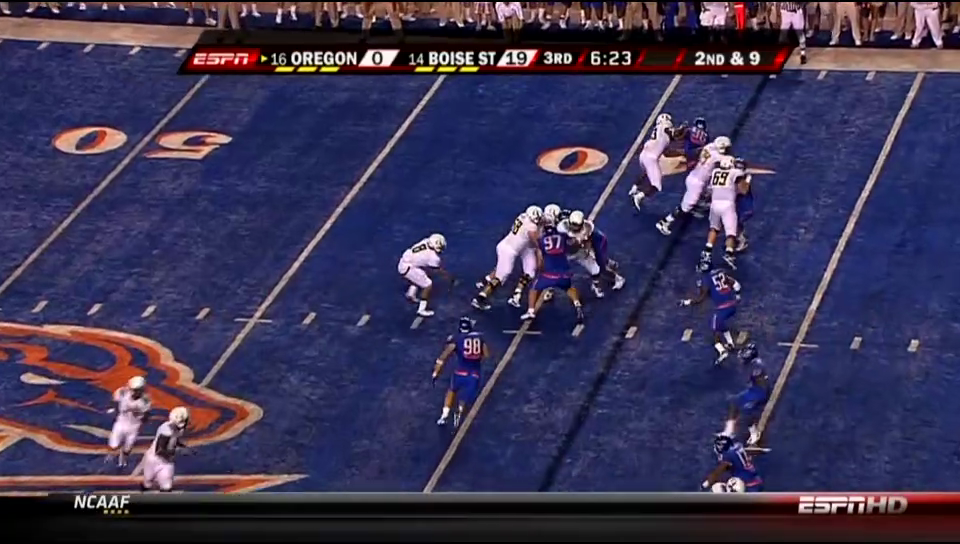 At this point, the play is breaking down, Thran is losing his block while Acrey is moving into the now quickly closing hole. Masoli ends up gaining 2-3 yards on the play. 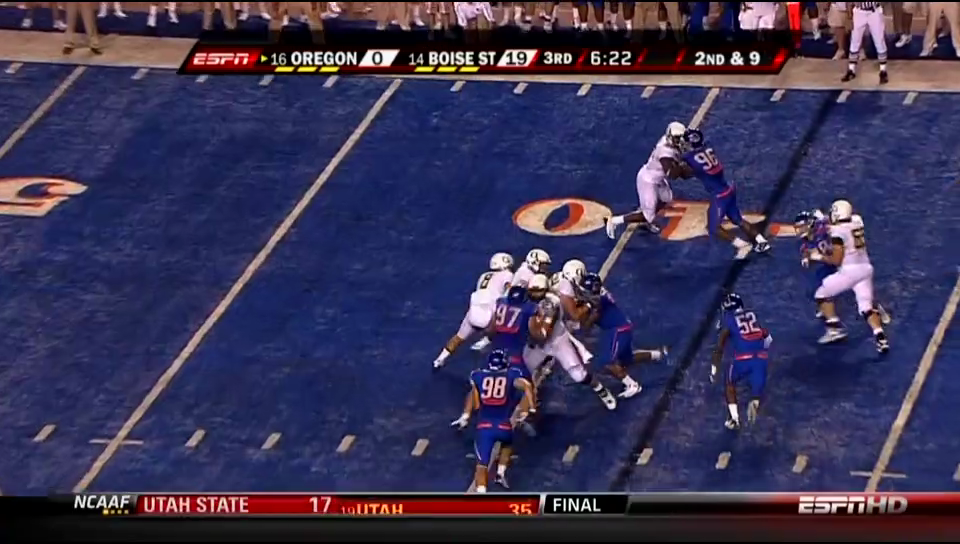 This time, the play was done in by indecision on the part of Masoli. There was a big opportunity on this play for success but Masoli did not hit the hole as it was opening. This is very unlike the Masoli we saw last season, who made the decision and then went straight up the field. And with an inexperienced line, any ball carrier will need to hit the hole with incredible speed. Indecision will simply not be an option.

Unfortunately, we'll see something like that again in the next play.

The final play may have been the most important of the game. This was the 4th down play which has received much criticism, as a field goal would have put Oregon within one possession of the Broncos. I don't criticize the call to go for it, though the execution of the play was poor. Oregon ran multiple times, with similar success each time. Oregon starts in a standard formation. 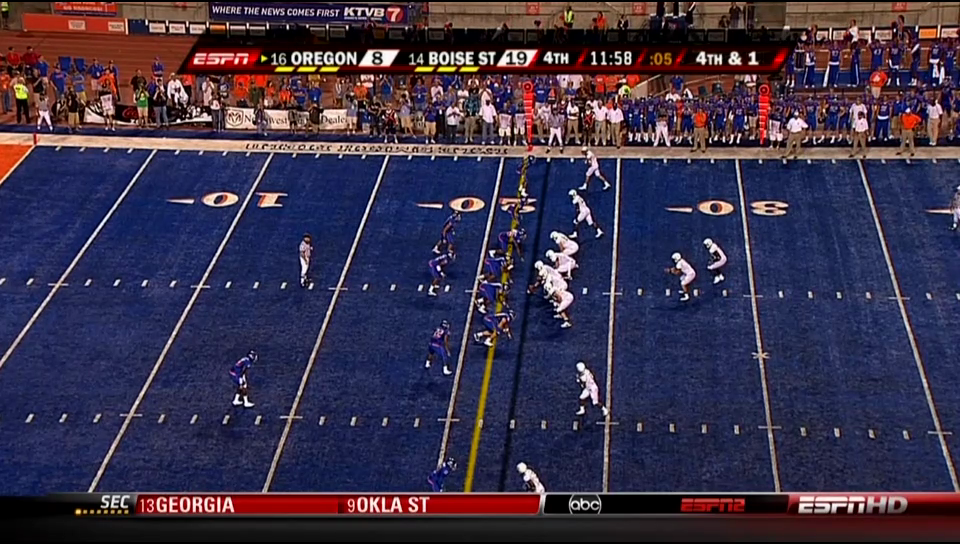 As soon as the play starts the line fails to push. And as BSU had done countless times, they had left both a DE and LB home on the end to watch Masoli. 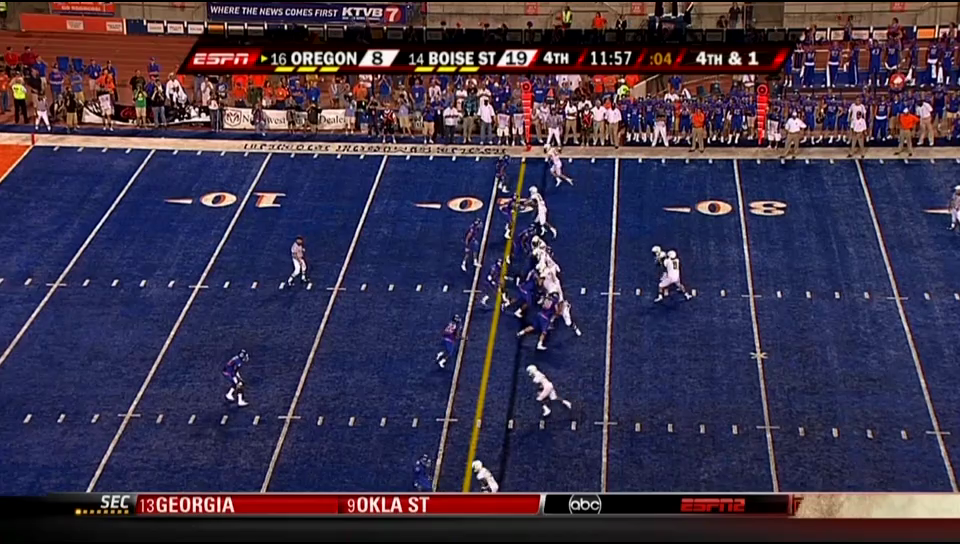 Masoli then hands the ball off to Blount, who gets stopped for a loss again, as BSU has more men on the line and is set to stop the run. 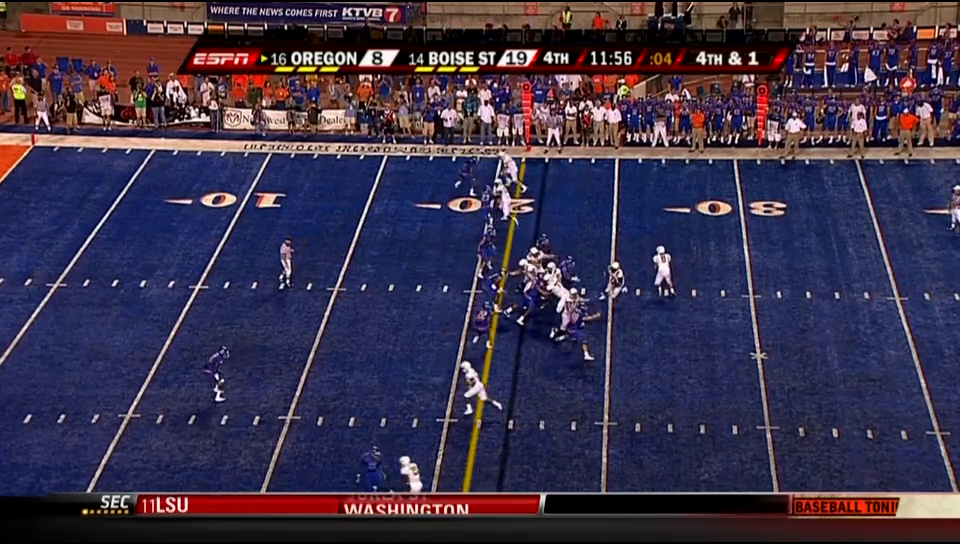 While this was not a great play from the beginning, I am surprised that Masoli did not hold on to the ball himself. When he had done this earlier in the game, gains had been not great, but they had at least been positive. What surprises me about this, however, is that we saw last year, over and over again, Masoli take the ball even when a DE was there on that end, unblocked. While success on this play was not guaranteed, I think it's indicative of a lack of confidence that was seen throughout the game on his part. In a game where he needed to be decisive, he was not. This lack of confidence was seen in the passing game, where he didn't have good reads and relied on his first option for much of the game, while showing little pocket presence or awareness.

So where does this leave us? Luckily, I think that these mistakes seen my Masoli are more than fixable. We know the talent that he has, and he improved as the game went on. But his confidence must return. He must trust his instincts and just go, something that made him so great last season.

If he can regain this composure, he'll be just fine. If not, we could be in for a very long season.