Share All sharing options for: Oregon needs to eliminate the USC running game to Win the Day

The Oregon defense has been a bit uneven this year. They've had dominating performances and made plays at the biggest times, but they've also looked very vulnerable. But despite that, I'm feeling pretty good about the Oregon defenses chances against USC.

One of the things that is great about being a fan today is that we have access to video that we didn't have even 5 years ago, and sharing that video can happen with incredible ease, and with a bit of extra time, you can do some pretty great video editing. While I can't go into Matt Daddy levels of analysis, I do want to take a look at a play from the Stanford game, and show why I think the Oregon defense will be successful tomorrow.

The key for Oregon's defense tomorrow will be simple: stop the USC running game. To some degree, this is counterintuitive. Matt Barkley and the USC receivers have received just about all the attention leading up to tomorrow's game, and there is no doubt that USC presents the best combination of QB and receiver talent the Ducks have faced this year.

Nowhere is this more apparent than against Stanford. In the first half of the game, Stanford moved the ball almost at will on the ground, and the playbook was open. When an offense is working like that, any defense will have trouble, and Oregon was no exception. I used this play last week as an example of how Oregon needed to stop making mistakes, but this is a prime example of what an offense can do on 3rd and 1.

While Oregon had multiple mistakes on this, there is simply too much that the offense must take into account. The linebackers must worry about both run and pass, and that led to multiple big plays for Stanford.

The biggest shift in the game happened when the Oregon defense started to shut down the Stanford running game, putting the Cardinal into multiple 3rd down situations.

One play in particular stood out. Oregon had taken a 38-31 lead, and Oregon held Stanford to 2 yards on the first two plays of the drive, setting up a big 3rd and 8.

There are a few interesting keys for this play. First, Oregon only rush two men. Two of the linemen dropped to spy on the backfield, and only the ends were bringing pressure. Everyone else dropped into coverage. This type of varied attack shouldn't be a surprise. We've seen Oregon mix up their coverages a lot this season, and their blitzing schemes as well, and this combination has been absolutely devastating on 3rd and long.

The other key to this play is the coverage of the secondary. With no credible run threat to worry about, every receiver is covered, and most are covered by two defenders. There is deep help by the safeties, and no one has decent separation. Luck simply had nowhere to go with the ball, and even had pressure been more delayed, it's doubtful anything would have opened up. 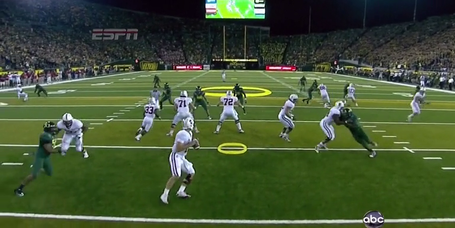 Obviously, USC is not Stanford, and will present a different challenge to the Oregon defense. But this isn't the Oregon defense of 8 years ago, where we knew opposing teams were going to throw, and we could do nothing to stop it. This defense has some weaknesses, but they are exceptional in certain situations.

The key to Oregon's defensive success will be to force Matt Barkley into situations where the defense knows what is coming. USC is a great offense, but I believe that Oregon is a good enough defense to stop any one-dimensional offense, no matter how good their skill players.

While many pundits are expecting Matt Barkley to have a big game, if he is forced into situations where he'll need to make big plays, I think that the Oregon defense will win the day.