Say it. Let it roll around in your mind for a bit, because it's true.

The Civil War in Corvallis will be The Biggest Game in the One Hundred Twenty Seven Year History of Oregon Football.

Not the game after this one.  Not yet.

Think about it. What game has meant more?

Look at the candidates...

No other games come close to measuring up. Sure, it was great when Musgrave hit Ferry in the end zone against UCLA to lock up the Freedom Bowl bid, but come on, it's not like we hadn't seen Oregon in better bowls than that one.  And all those previous Civil Wars, even the ones that led to Rose Bowl bids, had the same problem. They weren't taking us somewhere we'd never been.

The 2010 Civil War is different because, unlike any other final regular season game, we know that what's at stake is something  truly rare and desired. As previously documented, the Usual Subjects have so dominated college football at the top levels over the last 50 years that it's borderline miraculous to see a team Get There when they've not Been There.

And, unlike a "big" regular season contest, there's nothing that can happen after this game that can lead to a different outcome. Beat that highly-ranked team in September? Who cares? There are still nine or ten games left to negotiate. Nobody cares that you stomped Michigan if you turn around and lose to Wazzu.

Beat Oregon State this weekend, and we are there.

Not even the last Civil War, with its winner-take-all table stakes, can match this year's game for Brass Ring status. The stakes could not be higher, and the whole football world is watching. The BCS system has essentially taken the air out of every other bowl game. It's hard to get worked up about a game between #4 and #6, or #3 and #7, or however the other games work out.

Consider this: In the last 50 years, there have been 19 bowl games featuring the #1 and #2 teams in the AP Poll, with the winner being named national champion. The BCS has made it a semi-regular event - 2001 being a sad exception -- but between 1960 and 1998, the top two teams only met in bowls 10 times.  And a list of the participant teams is pretty much a list of the Usual Suspects.

USC, Ohio State, Alabama and Miami each have four "1 vs 2" appearances.  Three for Florida, Oklahoma, Penn State and Texas. Nebraska and Florida State appeared twice each. Only the singletons have an "interloper" feel -- Georgia, LSU, Navy, Tennessee, Virginia Tech and Wisconsin. That group boasts of only six national championships combined.

There's no other way to put it. You don't win a national championship unless you get to that final game.

And you don't get to that final game unless you win the last game of the season that you have to win.

There's no doubt in my mind. The 2010 Civil War is the biggest game in Oregon football history.

Any dissenters? These guys would like a word with you. 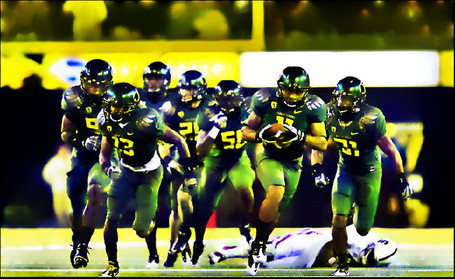