(Note: This was originally intended to be a This Week In The Suffering entry, but I wanted to save it for just the right moment.)

Did you enjoy that, Coach?

Did it feel great to rub your opponent’s face into the dirt, in a vain effort to save face in front of the home crowd? Didn’t you deserve that after all those years? To shut up the boosters calling for your head because you’d lost your last ten Pac-8 games?

Had you felt humiliated, after being pummeled the previous year by a team you thought you had no business losing to.. and even more humiliated knowing you couldn’t score against their third string in the 2nd half?

Did you want to run up the score so bad that you left your starting tailback in the game long enough to suffer a separated shoulder, ending his season?

And in the 4th quarter, after you’d done what you vowed to do – put up 59 points – why wasn’t that enough?  Did you put your best passer back into the game for the last drive, tell him to run on every play and not to stop until he either got the team to the end zone or the game ended? Just because you could?

How about the coach on the other side? The new guy, Don Read? The man widely known as one of the nicest and most decent coaches in football? You knew he had a weak team. That he’d taken over a 2-9 squad, had been blown out at Nebraska and Berkeley, and even though he’d managed to hold USC to a single touchdown the week before in a 16-7 loss, his team was fragile; he’d already dismissed his best lineman, senior OT Mike Popovich, for violating team rules.. and in response, Popovich actually said "I love that man, I always will.. Don Read is sincere, organized and dedicated." Without a trace of sarcasm.

What a pansy, you probably thought.

You knew the QB who’d dazzled you the last season, Herb Singleton, had broken his wrist while working a summer job at a lumber mill the previous summer and wouldn’t be a problem. That he’d been replaced by one Norval Turner, who would be sharp enough to coach in the NFL someday, but as a player had earned the sobriquet "Norv Turnover".

Everything had lined up perfectly, hadn't it?

The previous year, you’d watched, helpless, as a bad Duck team scored on you, almost at will, in Autzen. After that game the born-again and soon-to-be-former coach Dick Enright said, "Winning is important. The size of the score means nothing," and, noting he’d played his second- and third-string for most of the 2nd half, reminded writers "Only the Lord gives mercy." That he’d "rather beat USC by one point than Washington by 100-0." Which didn’t sound right, but you could understand his enthusiasm; it was the last game he’d win as a coach.

Did that embarrass you, Jim? Losing that badly to a team and a program so pathetic that when it fired the coach that had stomped you 58-0, the coach had to hear about his dismissal from a reporter?

Did it bother you that, even after Enright called off the onslaught after leading 49-0 in the third, your team had still given away points, on an interception return and a safety?

Was it all just too much to take? Losing like that to the DUCKS? Inconceivable!

Your team was 2-4. You were in the last year of your contract. The vultures were chasing the seagulls away from Husky Stadium. You had to do something to make up for the humiliation. Sure, some would say you’d humiliated yourself, but dammit, that’s what made it worse, right?

You knew what you had to do. You were going to lay 59 points on those damned Ducks.  You didn’t care how anyone else felt. Payback is a bitch. A purple-and gold bitch.

You knew the fans who showed up would treat the game as a bullfight, and there you'd be, in your suit of lights, slaughtering the helpless opposition. 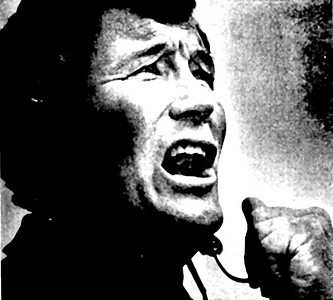 Your team didn't have to try very hard. You had a pretty good running quarterback named Dennis Fitzpatrick, and a pretty good passer named Chris Rowland. You’d thumbed your nose at the usual "quarterback controversy" talk, starting "Fitz", but using Rowland frequently.  But Rowland wasn’t a runner, and you ran the option. So, when Fitz hobbled off the field in the 3rd, after being picked off while throwing into the Oregon end zone with a 45-point lead, you decided to stick with Rowland.

You already knew you’d played your starting tailback, Wayne Moses, one play too long; he’d gone out of the game, with a shoulder separation, in the 3rd quarter with your team leading 45-0. He was out for the season.

But you didn’t care. You had to make a statement. Nobody runs up the score on Big Jim Owens.

Rowland led the drive that gave you that magical 59th point, early in the 4th quarter. With that extra point made, and knowing that Oregon wasn’t going to do a damn thing on offense – the Ducks would only manage 55 yards, on 55 plays, with two first downs, four turnovers and twelve punts – you wouldn’t have been blamed for giving him a rest.

No. Not you. You were a fighter. And it’s easier to kick them when they’re down, right?

After the last Oregon punt pinned your team on its 10 yard line, with six minutes left, you sent Rowland out for one last series. You told your passing quarterback to run the ball every play.

Right up until he broke his ankle while rolling out on the fourth play of the drive.

Only then did you bring in your third-string QB, who finished the job. Gave you that nice round 66-0 win.

How nice was the other coach about it?

"I don’t think Jim Owens was trying to run up the score.. Our kids came prepared to play.. We made mistakes all over," Read said.

Did he think the big Duck win the previous year was a factor? "I don’t know."

"I apologize to every Duck."

You laughed it up with reporters after the game.  What were your halftime adjustments while up 24-0?  "I subtracted 24 from 59 and got 35!", you guffawed.

Of course, you pulled it together quickly enough to visit Chris Rowland in his hospital room after the game. Rowland remembers you had tears in your eyes.

Were they tears of sympathy, or just the remainders from your joyful evisceration of the Ducks that you’d conveniently forgotten to wipe away?

None of this matters much in 2010, of course. The record shows that Jim Owens resigned in 1974, after 18 seasons as UW head coach. That 66-0 victory in Husky Stadium was ultimately considered "necessary, but insufficient".. and, although the Huskies had finished the season 5-6 and won the Apple Cup, losing consecutive games to USC and Cal by a combined score of 94-37 was the last straw for the old coach. Owens was out; a guy nobody had ever heard of, Don James, from Kent State, took the job nobody else wanted. The rest is a sadly lamented history for UW fans, who have never quite gotten over how the Pac-10 and NCAA screwed them over in 1993 for a few little piss-ant violations.

It’s hard to pin down when The Suffering really began. Was it the holiday sacking of Jerry Frei in ’71 for not firing one of the best coaching staffs you’ll see anywhere?  Enright’s excruciating ’73 season, that could have been 8-3 but was 2-9?  Read’s school-record 14-game losing streak?

Or is it best lain upon the shoulders of one bad game, one misguided effort.. like the 5-0 "Public Square Whipping" against San Jose State, or the various paycheck humiliations at Oklahoma or Nebraska?

A strong case can be made for the debacle on October 26, 1974, when Don Read learned that it didn’t matter if he hadn’t been the coach in ’73.. didn’t matter that Enright had taken his foot off the gas that year and put the stick in neutral.. didn’t matter how many players the UW coach put in the hospital. Revenge would be had, at Oregon’s expense.

And Read’s team was completely unable to do anything to stop it.

This was a game that was supposed to be competitive. Not like losing 61-7 at Lincoln; Oregon had been expected to lose that game, and if it got out of hand, so what? The Nebraska fans were so nice about it.

This wasn't like that. There’s a big difference between losing at Cal, 40-10, and losing in Seattle by 66 points two weeks later. And it’s more than just 36 points.

This was Suffering. The Suffering had begun.

And that is why I hate the Huskies. 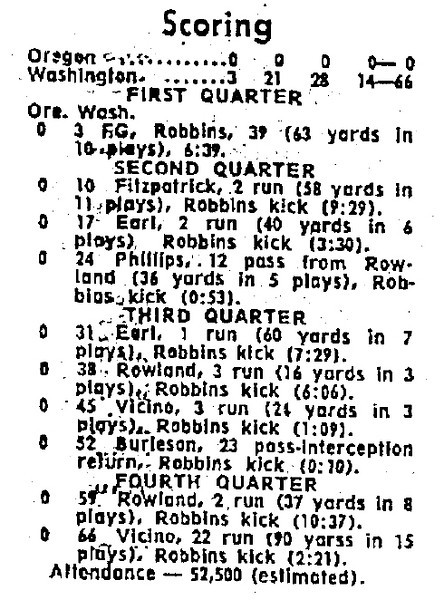 Why do you hate the Huskies?