Aliotti, This One is Up to You and the Defense

Share All sharing options for: Aliotti, This One is Up to You and the Defense

It's obvious that with two of the most prolific offenses in the country squaring up to play for the ultimate prize, they will get most of the attention.  However, there is a reason for the saying, "defense wins championships."  There has been a lot of talk about the comparisons between Terrelle Pryor and Cam Newton and how Oregon's defense struggled against Pryor in the Rose Bowl.  It is and always will be my contention that the defense didn't lose the Rose Bowl for Oregon.  Scoring 17 points instead of closer to their average of 36, missed field goal late, and costly turnovers by the offense are much more responsible for that New Year's Day loss than the defense was.

Also when you look at the Rose Bowl game statistically, Terrelle Pryor had an average to above average game (not exceptional like a lot of us remember) and their rushing game was held to its third lowest yards per carry at 3.00.  The other two lower averages both resulted in a loss.  Here is all I really need to say about why Oregon lost the Rose Bowl: 9/20 81 yards 0 TDs and 1 INT.  That's Masoli's passing line.  It was the third time in 2009 that Masoli had been held under 100 yards passing; Oregon hasn't been held under 140 yards passing all year this year.  I think it's safe to say that Oregon's offense is more consistent, more well-rounded, and better prepared for this BCS game than they were for last year's game.  Also, last year we were playing the #4 ranked defense in yards per play, and this year we have a better offense playing against the #48 ranked defense in yards per play.

Looking back at last year's game against Ohio State the key match up was whether Ohio State's tough highly-ranked defense would be able to slow down Oregon's highly-ranked offense.  We all know how that worked out.

Looking at Oregon's most important game ever this year the key match up is going to be will Oregon tough highly-ranked defense be able to slow down Auburn's highly-ranked and award winning quarterback and offense?

Let's look at how they'll try and do this.

First, let's talk philosophy and experience.  Auburn runs a very similar misdirection and spread attack to the one Oregon's defense has seen all year from their own team.  This game is not going to be a clash of different offensive styles.  Both teams also like to play up-tempo.  One thing that Oregon's defense has exploited a number of times this year has been the opposing offense being worn down later in each half due to the number of plays they have to run.  Oregon's used a line changing substitution pattern to keep guys fresh in the game.  While I still think there will be an advantage in this area for Oregon, I think it will be muted due to the longer and more prevalent TV timeouts, longer break at the half and the fact that Auburn runs a similar style.  As far as personnel goes, besides the QB, Auburn does not present any match-up that Oregon hasn't seen.  Their WRs have decent size and speed, but are not nearly as accomplished as a team like Arizona's.  They have a good young RB, but he's not the focus of their rushing attack.  Their TE will be used primarily as a blocker and as a receiver in the red zone.  The biggest challenge for the defense outside of "Rent-a-QB" will be their offensive line.  They start 4 seniors and 1 junior and have consistently given Cam time and holes all year to work with.

One of the most integral parts of this match-up between Oregon's defense and Auburn's offense is going to come right up front and whether Oregon can put pressure on Newton to either tuck and run early or pass before he's ready.

Much was made about how Cal created a blueprint for how to slow down Oregon's offense and get pressure on Thomas by using a "cover zero."  Considering Auburn runs a similar offense to Oregon, wouldn't it make sense for Oregon to use that same scheme to try and slow down Auburn?

Oregon has preferred to play a base Cover 2 most of the time this year.  In a Cover 2 you have two deep safeties that split the field in half and cover deep routes and provide the support over the top.  This type of defense will be beneficial to Oregon early in drives when there is still longer yardage to get a first down (1st and 10+, 2nd and 7+).  Oregon will be able to keep most of the play in front of them, and then it will be up to good fundamentals, tackling and rallying to the ball to finish off the play. 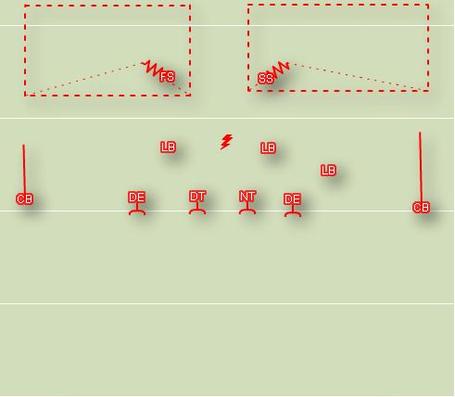 Oregon will still blitz out of this Cover 2 depending on the down, distance and field position.  This is where you'll see TJ3 play up on one corner while Harris will drop back and play more zone.  The safeties will rotate behind the blitz to provide pass support over the top should the blitz not get there.  Aliotti is going to have to use this type of defense sparingly, because he doesn't want to allow too many big plays when Auburn is in longer yardage type situations.  If Aliotti disguises these blitz scenarios properly he can force Cam into more hurried throws or to make plays with his legs.  Once again, I don't foresee Cam outrunning our defense as long as the fundamentals are strong in tackling and rallying to the ball.  If Oregon blitzes and LBs are forced to make one-on-one tackles on Cam and they try and do it with their arms, Newton is going to be running for big yardage in this game. 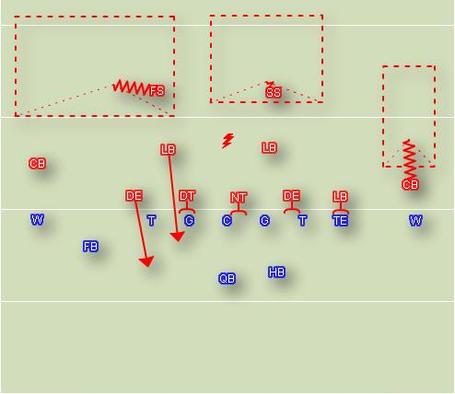 Probably the most used blitz package for Oregon comes out of their Cover 1 defense.  With Eddie Pleasant being switched to SS/Rover this year, it has allowed Aliotti to move Boyett into the center field safety position and bring Pleasant down closer to the line of scrimmage on a TE or Slot receiver. 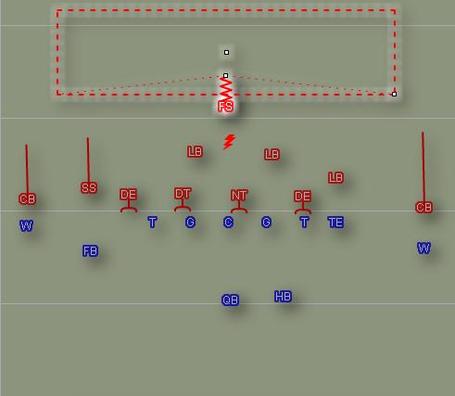 In Oregon's Cover 1 blitz, Oregon will usually bring pressure off the weak side with Kenny Rowe in the LB/DE position and Casey Matthews overloading the tackle forcing the HB to decide if he can make it over in time to help pick up the blitz or trying to slip out of the backfield as a safety valve where Paysinger will be spying on him.  This is also the perfect type of defense for Oregon to use against Auburn's zone read.  You'll be overloading the side the RB is running into with the blitz and leaving the DE or OLB at home to make Cam read off them.  Also, if Auburn tries to use their zone read play action, you still have your best center fielder in place in Boyett at Safety and Pleasant is filling in behind the blitzing LBs, and as a former LB himself he is very comfortable in this position.  Expect Oregon to run this type of blitz when Auburn is in obvious running situations.  Stopping Auburn early and putting them in long yardage situations (2nd and 10+, 3rd and 7+) will allow Oregon to unleash more confusing zone blitz schemes and and bring pressure from different areas that will allow Oregon playmakers to make plays. 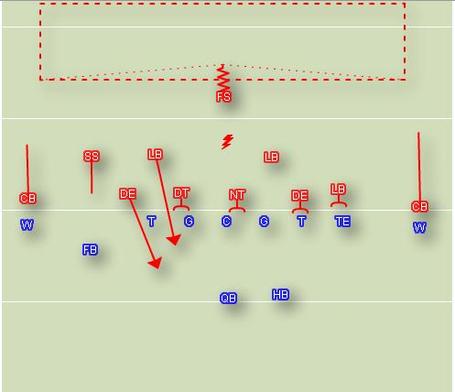 A Cover Zero presents a whole new set of challenges for the offense, but it's also an incredibly risky defense to play.  As you can see from the diagram, a Cover Zero is when both safeties (FS and SS) load the box and provide run or short pass support.  This is obviously a high risk defense considering there is no deep help on the corners.  In a defense like this, typically the corners will play a lot softer allowing passes underneath so as not to get burnt deep.  What you do accomplish though is you bring two extra defenders down allowing either a LB (most likely Paysinger) or safety (Pleasant) to spy the QB or HB.  If you get into the backfield quickly enough with your pressue from the front 4 you'll be able to shut down the run and not give the QB enough time to find an open WR.  If you don't, your corners and LB's are vulnerable to a big play.  Aliotti needs to test this offensive line early and the Cover Zero is a perfect defense to do that.  If Auburn's o-line holds up and our corners are struggling staying with guys because Cam has too much time, Aliotti will need to abandon this defense sooner rather than later.  On the other hand, if Oregon is able to create pressure out of this type of set, he can really keep the o-line off guard by mixing up the Cover Zero and Cover 1 Blitz on where the pressure is going to be coming from. 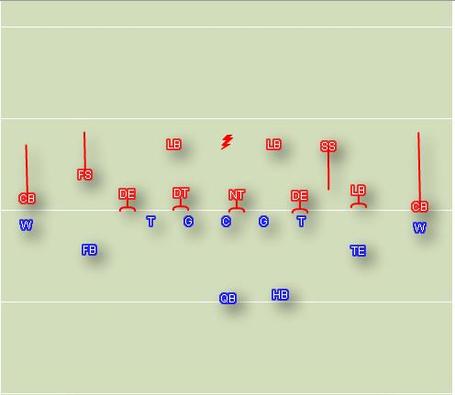 You can also blitz out of a Cover Zero and bring an extra defender than the offense can block.  When you bring the blitz on the strong side like this, you'll shut down the zone read as the QB goes to read the DE, he'll still have 2 LB's to deal with and only a TE in there to block.  Once again the Cover Zero blitz is an even higher risk, because if the RB gets to the weak side edge and the blocking is adequate, the play could go for lang yardage as well.  Aliotti is going to have to pick and chose when to bring this "jail break" defense.  A third and short, or fourth and short and needing a stop are most likely, but he's also brought the house like this a number of crucial times when the offense was expecting a more conservative type coverage during the year.  This game should be no different. 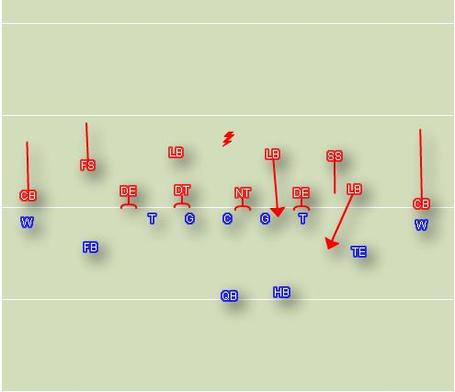 So what's the best defense for Oregon to use against Auburn?  The answer, all of them.

By no means do I think that Oregon is going to completely shut down Auburn's offense.  As I pointed out in the beginning though, I don't think they have to.  Oregon's offense is going to be better this year and Auburn's defense is not nearly as good as Ohio State's was last year.  What Oregon's defense has to do is get key stops, make Auburn play longer and harder than it's ever had to, and hopefully get some big plays.  The defensive play calling is going to be huge in this game.

When Auburn has a long way to go on the field and they are in 1st or 2nd and long, Oregon should vary its Cover 2 and Cover 2 blitz calls.  You don't want to let Auburn score quickly.  Oregon still has an advantage of depth and you want to make Auburn go the length of the field and wear their players out trying to score.  This plan has worked all year for you, don't change it now.

Between the 30 yard lines, Oregon still needs to use its base Cover 2, but depending on down and distance mix in some Cover zero and Cover 1.  Aliotti has shown a propensity to bring one of those types of blitzes on 3rd downs.  On 3rd and long a Cover 1 blitz will force Newton to make a quick decision on the pass and still provides some support over the top.  3rd and less than 5, Aliotti is going to have to take some chances and bring a Cover Zero blitz and hope that he can force Auburn to punt more often then it would like.

Yes, that means Auburn is going to get some big plays.  They're too good offensively not to.  Then again, we'll be putting our defense in a position to make big plays too.  Oregon's done a great job all year making big plays because Aliotti hasn't been afraid to play some high-risk high-reward scenarios.  This game is no different.