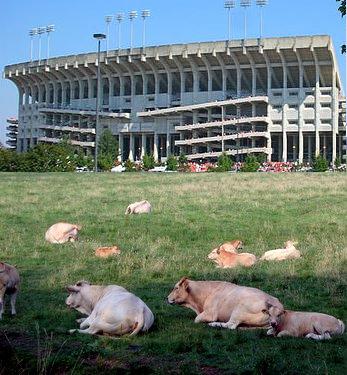 Greetings Oregon Ducks fans! I'm Kleph, a writer for Roll Bama Roll, the SB Nation website covering the Alabama Crimson Tide. I've heard you fellows have scheduled a little game of football against our cross-state rivals Auburn next month and I've taken it upon myself to offer a bit of background on your foe.

Even for those with a passing familiarity with college football, the rivalry between Alabama and Auburn is recognized as one of the most heated in the sport. How heated? Well, I've got a ticket to the game in Glendale and one of the reasons I plan to be there is to make sure some poor bastard in Orange and Blue won't.

How much do we hate Auburn? We didn't even play them for 40 years because they were whining about us beating them too much.

But don't take my word on it. A Michigan blogger who accidentally stumbled into the fray a few years back said the vitrol between the schools, "would make Palestinians and Israelis shake their heads and go, 'Wow, those folks really hate each other.' "

There is a reason for all the enmity. In his superb book on Alabama fandom, Rammer Jammer Yellow Hammer, Warren St. John observed:

So, basically, take your relationship with folks that hail from Corvallis, multiply it by about 1,000 and serve with a garnish of pure unadulterated hate.

The practical result of all this is the... lets just say, distinctive attitude of the Auburn fans. Because "once you've been dismissed as a lowlife and a redneck," St. John writes. "There's a certain defiant pleasure in acting like one." And, boy howdy, are you Ducks ever gonna get a double-barreled blast of that over the next few weeks.

So for you west coast denizens who might not quite understand what you are getting into when you face the Plainsmen, here are a few things you might need to know in order to remember exactly why Auburn represents everything we find horrible and bad in college football and the universe at large.

Immaturity. For most, rolling trees with toilet paper is something you do in high school and get over when you go to college. In Auburn, it's a storied tradition.

Hypocrisy. Auburn partisans deride Alabama fans for "living in the past" but never fail to bring up a punt they blocked 40 years ago. They mock Alabama for claiming "undeserved" national championships but then whine how they really should be given the 2004 BCS trophy.

Indecision. Auburn's mascot is a tiger but then they also have this War Eagle thing. As EDSBS's Spencer Hall put it; "You don't get to play Pokemon with your mascots. CHOOSE ONE."

Cheating. They do it. A lot. And a look at their prior "championship seasons" illustrates this starkly:

(For an excellent and delightfully partisan analysis of the Plainsmen's tendancy to get creative with the rules, we urge to to read this post by the Georgia Bulldogs blog Dawg Sports)

Absent-mindedness. Auburn coaches have been known to lose their pants under strange circumstances.

Racism. Southerners are acutely aware of the stereotypes that abound concerning the region's history in terms of race relations. And most of us strive to correct the misconceptions and improve the situation as we are able. Then there is Auburn.

Bad taste. They wear orange. No team with a modicum of self respect and decency would willingly don that color. Amiright?