As ATQ approaches its one millionth visit as a website I thought it would be appropriate to review where this site started, how it grew and where it is today.  Consider this a brief review of history on ATQ and a prelude of things to come for a site I believe many of us find an integral part of our daily internet lives.

Back in the day there were limited options when it came to blogging choices and Dave (Addicted to Quack) decided that he wanted to talk about Oregon Ducks sports.  The only problem was he had a few choices when it came to where he could have  this intelligent conversation.  Until one day SBNation came knocking at his door.  SBN asked Dave to join their network and blog about the Oregon Ducks.  Dave felt like a neophyte but agreed because of his interest in writing.  When asked to come up with a name, he came up with an expression he had heard before (but can't remember where) Addicted to Quack.

At first things were a struggle.  We owe a tremendous debt of gratitude to Dave for sticking it out in the beginning.  Most posts consisted of only comments coming in the form of "fr33b0n3rpillz" type spam.  It was tough to get people to comment or register to the site.  As a side, Dave really got into Blazers Edge and was enthralled with their Jersey Contest and even ended up winning their first ever Jersey Contest.  Later he ended up stealing the idea (with permission) from Blazers Edge and adding it to the ATQ community.  This was the best move for the site Dave ever made.  The Jersey Contest opened many doors to more posters and comments on the site.  ntrebon was one of the first regular posters and actually still runs the Jersey Contest to this day.

How the Site Grew

On October 28th, 2008 Dave felt for the good of the blog that it was best that he step down.  This ushered in the reign of Jared (jtlight).  Jared was able to take the blog to a different level and fulfill the potential of what the site was supposed to become.  For Jared the plan was simple, add members and grow the community.  Jared knew it was going to take others getting involved to make this happen.  Eventually Jared included Dominic (dvieira) and Paul (PaulSF), Jeremy (JConant) and later added Matt Daddy and Takimoto to the mix of Editors and Authors on the site.

Jared found the secret overall was adding the right posters to the site who commented a lot, and then making sure to capitalize on the events that transpired with the school.  Jared believes that the reasonableness and sensibility of the site has added the most members and grown the community more than any other aspect.

Where We Are Now

Right now ATQ reaches a milestone; One Million Visits.  As you can see from the chart below, recently the site has had a meteoric rise in number of daily visits.  What I find best about this site is the diversity of the community.  There are young members, there are old members, and there are guys in between.  There is the ability to make fun of each other, other schools and then let it go.  You can be cavalier with your comments and as long as they are somewhat reasonable you won't catch much flack.  We have guys from other sites that frequent our board.  We have guys who run other sites that regularly read and comment here.  This is a diverse and growing community that I am proud to say I am a member of and I take pride in making it what it is today.

The best thing about ATQ is that you have a voice.  Whether it's the way that Dave established it or the way that Jared nurtured its growth the site still remains sensitive to the community as a whole.  As long as the members are allowed to articulate their opinion this site will continue to prosper as a medium on the subject it finds most important... The Oregon Ducks.

So, whether you are brand new, or the Godfather himself, enjoy the community that has grown and flourished into one of the best Pac 10, Collegiate, Sports Blogs in existence.

To everyone out there, I say, thank you and welcome to Addicted to Quack. 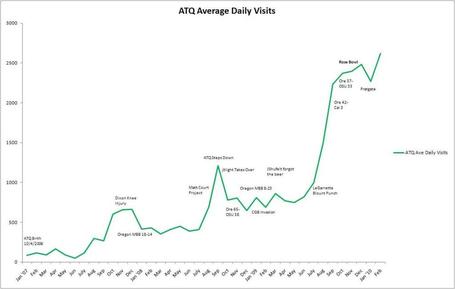