With my wife and I both being teachers, spring break is always a fun affair.  That fun has never included baseball--that is until now.  I had never been to a college baseball game before March 21 (and why should I, with Oregon not having a team).  I didn't really know what to expect.  Baseball is baseball, and I knew the game would be fun.  But I was very curious about the stadium itself, which in my mind is an integral part of the baseball experience (I enjoy going to as many different ballparks as possible, as they are all unique).  But I have never been to a college field, and worried that trying to compare PK Park to many minor league stadiums I'd been to would be a mistake.  I had two images in my head.  One was Joe Etzel Field at the University of Portland, which I had seen one time while attending a game at the Chiles Center, which is basically a non-descript baseball field with bleachers.  I knew Oregon would do better than this, but my impression was that this was the typical college park.  My expectation was something like that monstrosity you see driving down the freeway in Keizer where the Salem-Keizer Volcanoes play--a boring, non-descript, non-covered stadium with aluminium bleacher seating abound.  I should have known my school would do better--silly me.

We drove down to Eugene the night before and stayed with the in-laws for the 11:00 first pitch.  It poured all morning.  I mean cats and dogs.  I was sure that they couldn't play baseball in this weather--and the hours from 8-10 consisted of me calling the UO baseball rainout line every half hour to see if we were going to have baseball, to which a friendly automated message assured me that the turf could handle the rain.  And boy could it ever.  It rained--and rained hard--all game, and the turf took it all.  I couldn't tell you what kind of turf the Ducks have on that field, but it would take a monsoon to rain a game out (it helps that the infield basepaths are turf as well).  Obviously, its the finest turf money can buy (then again, I'd expect no less).

Having no idea what to expect from a college baseball game, I roll into the Autzen parking lot and realize that this is an event.  Kids bringing their gloves, the smell of grilled burgers and hot dogs in the air, and lots and lots of people.  This team is a big deal, and will get lots of support here.  1600 people showed up in the pouring rain to watch this team play a terrible opponent.  The atmosphere was as much as any minor league game I'd been to.

There are two entrances to the park itself, and you can head up the left field entrance right from the Autzen parking lot.  However, I had to got to will call to collect my tickets, and that took me to the home plate entrance.  Upon walking up into the park, I was pleasantly surprised.  All the seating was covered, and all were single chairback seats, save for a small section of bleachers down left field that will serve as the student section.  The seats go about 15 rows up, and there is really not a bad one in the house, as the concourse itself is not far from the field.  And as you expect in major league parks these days, the field of play is completely viewable from the entire concourse.  The luxury boxes were where they belong--up and out of the way.  I was immediately blown away that this was a college facility.  It was easily nicer than any single A minor league stadium I'd been  to, and it wasn't particularly close.

We found our seats, and with the game to start in minutes and the kids more than ready for lunch, I headed for the concession stand to get some lunch (this would prove to be a mistake).  The concourse consists of one concession stand, which has the standard fare--basically hot dogs, sodas, nachos, pizza, and pretzels, a few carts with things like frozen lemonades, restrooms (including a nice family restroom, appreciated as I have small kids), and a small Duck shop.  I picked up a few small, overpriced hot dogs and headed back to our seats, which, as I said before, were fantastic.

The concession stand was my one regret of the game, not because it wasn't what I expected (its basically the same crap you get at Mac Court), but because when I went to explore a bit later, I found that the right field BBQ/beer garden area (the "Fowl Territory"), is the place to go to get the grub.  Grilled burgers, foot long sausages and hot dogs, and several varities of delicious beer.  When you want food at the Duck game, don't make the same mistake I did, this is where you want to go.

Finally, the field itself--gorgeous.  And while I'll have to get used to infield turf (necessary for spring baseball in Oregon), and hearing a ping instead of a crack off the bat, the field was gorgeous, the backdrop gorgeous, and really nice scoreboard and videoboard.  This place was done right, and at only $15 million, it makes me that much more excited to see what Matthew Knight Arena is going to become.

I've heard that this is the best facility in the Pac-10, and maybe in all of college baseball--and I don't doubt it a bit.  There's a reason the minor league Emeralds will be playing here this summer, and that's because its a place that any team would be proud to call home.  The Ducks absolutely nailed this facility--and with Coach Horton at the helm, its only a matter of time before the games here start to get very, very meaningful.

Here are a few pictures I took at the game: 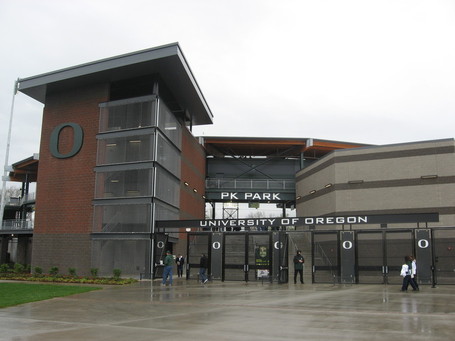 The view from my seat, on the third base side: 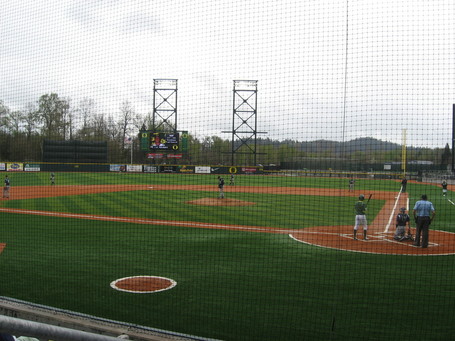 This picture shows the concourse and seating bowl: 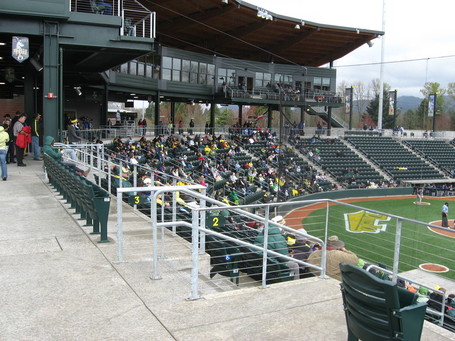 "Fowl Territory" and the practice facilites behind right field: 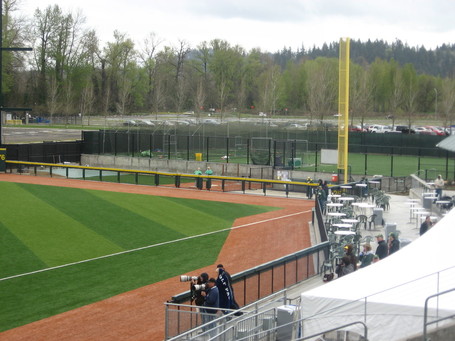 The view from home plate: 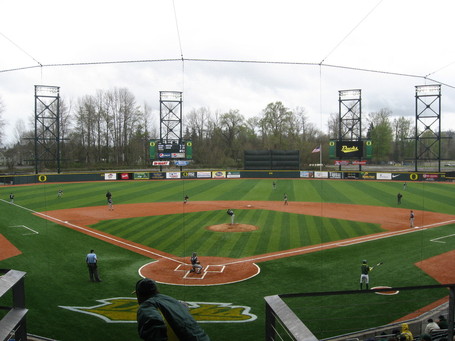