Part 6 in a series on Oregon's 2010 season opponents 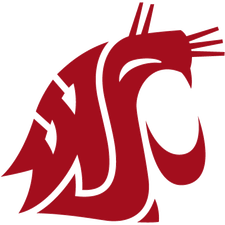 Oregon heads to Pullman in early October, hopefully before the weather out there becomes unbearable, because that should be the only thing stopping the Ducks from rolling up a big victory.

Last year, they ranked dead last in S&P+ by a significant margin, and according to the same metrics, had the second-worst passing attack and rushing attack in the country.

Honestly, there's no way that this offense can get any worse. They return 8 offensive starters, including most of their offensive line, and most importantly, QB Jeff Tuel. If there is any offensive optimism going into this season, it's due to Tuel, who came in against USC last season, and was surprisingly competent. He played well over the next few games, including a 354 yard performance against Cal, before going down with a knee injury. If Tuel can grow to be an average to above-average QB, WSU will be vastly improved on offense.

Tuel may not have a lot of help from the run game, however. James Montgomery, a transfer from Cal, returns after playing only the first three games last season, and there isn't much behind him, though Paul Wulff is seems to have some hope that they'll get production out of their freshman recruits.

At receiver, the Cougars return their top 3 receivers, including their leader Jared Karstetter. The experience should be a benefit, though the unit can only hope for mediocrity and won't be blowing anyone away.

The key to the entire offense will be the offensive line. Cougar fans are hoping that they improve, and that won't be tough to do from last seasons numbers. They gained only 71 yards on the ground last year, and gave up a sack rate of 14.2%. If the line can become even below-average, that will help the rest of the offense tremendously

Overall, this will not be a good offense. If they are not in the bottom of every Pac-10 category, that has to be considered a success for the team. Oregon should manhandle this offense. They have more talent and should win pretty much every position battle. While the Cougars may be improved, they still have a long ways to go before they will have a competitive Pac-10 offense.

The woes of the WSU defense start with the defensive line. They have simply been pushed around, and have made it nearly impossible for the rest of the defense to keep up. This season, they return every starter, and 8 players with starting experience, and also add some depth with JC transfer Brandon Rankin. If they can hold their own at all, it will give the rest of the defense a chance to be marginally successful.

The linebacking unit is led by Alex Hoffman-Ellis, WSU's returning tackler. Behind him, there isn't much proven talent, though there is at least some talent. Touted 2010 recruit CJ Mizell could make an impact, though talented LB Louis Bland may have to redshirt due to recurring knee problems. Paul Wulff thinks this unit will be faster, though starting off with significant injury problems doesn't bring a lot of optimism.

The secondary returns starters CB Aire Justin and SS Chima Nwachukwu. Both have had decent production, but niether will be a difference maker in the Pac-10. 7 players with starting experience return. If the unit could avoid injury problems, they might be able to get some degree of cohesiveness. But that could just be wishful thinking.

The WSU defense will have an almost insurmountable task slowing down the Oregon offense. Two years ago the Ducks put up over 60 points despite uncertainty from the QB position. With a few games under their belts, the Duck offense should steamroll the Cougars.

The number one key to strong special teams play is depth, and WSU has just not had it recently. That is very apparent when looking at opponents special teams stats. WSU has given up large yards in the return game, which simply cannot happen to a team struggling to stay competitive. If WSU has been lucky enough to get into a field position battle, they have lost it quickly.

In the kicking game, WSU has a solid punter in Reid Forrest. He's gotten a lot of practice the last few years and slowly improved, though punt coverage hasn't helped him much.

WSU can look to improve this year, though they still have a long ways to go.

WSU has been so utterly terrible over the past few years, that even if they improve significantly, it is doubtful they'll win a Pac-10 game. But Paul Wulff's team has a chance to make some good strides this season. They have a lot of players returning and have been killed by injuries over the past two seasons. They might see some dividends this season. Talking about winning a Pac-10 game is very optimistic for this team, but the Cougars have chance to move towards staying competitive in some Pac-10 games. For the sake of the Cougars, and the Pac-10 as a whole, I hope this happens.

Oregon will not be one of those games, however. The Ducks will have a significant edge in every position battle on the field, and it will be a shock if WSU can keep the final score within 3 touchdowns.