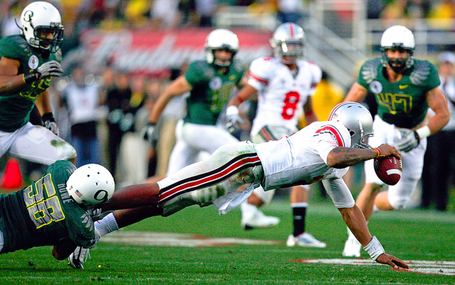 There has to be a little bit of concern about the defensive line coming into this season considering it is replacing the greatest number of players of any position both offensively and defensively.  Especially early in the season as the new guys integrate themselves into the mix.  However, with Coach Azz barking orders  and leading his troops, as well as the talent that is coming in this year, the defensive line should be able to create holes for the linebackers, put pressure on the QB and adequately contain the running game.

This group is going to be led by its two returning seniors in Brandon Bair and Kenny Rowe.  Rowe had an exceptional 2009 campaign as he led the conference in sacks and was tied for 9th nationally.  Going into 2010 he is already on 3 watch lists (Lott Trophy, Lombardi Award, and Bronco Nagurski Trophy).  Rowe is one of the most versatile players on the defense with his strength to take on an offensive lineman and get after the quarterback, but also with the speed to play outside linebacker and cover the flat.

Bair will look to build on his 2009 season where he led the defensive line in tackles.  He's also the oldest player on the team and I'm sure that a number of the younger guys will be looking up to him as a leader as they integrate into the system.

Replacing Blake Ferras and Will Tukuafu are Terrell Turner and Zac Clark on the starting line.  Both guys saw extended time last year as Aliotti and Azzinaro like to rotate in a number of guys to keep them fresh.  Clark is another senior who will be looking to make his mark in his final year at Autzen and Turner will be looking to build on a solid 2009 campaign where he was 3rd on the team in sacks.

Probably the most intriguing part of the defensive line is how some of the young guys progress.  Dion Jordan and Anthony Anderson have tremendous size and quickness to be able to cause havoc in the backfield.  Look for one of these guys to eventually become the successor to Rowe in that defensive utility lineman position.

Looking to add some beef up the middle the coaches will play Wade Keliikipi and Ricky Heimuli.  Keliikipi as a redshirt freshman weighs in at 289lbs, while Heimuli comes in as a true freshman at 309lbs.  These guys will both see the field this year, and should create a big problem for the offensive line as they bull rush up the middle.

All in all the defensive line has 8-10 solid players and a great mix of size, strength, speed and quickness to create a ton of problems for the offense.  It should be interesting to see how the matchups play out this year and who steps up to make plays.  Rowe and Bair will be solid as usual, but there is definitely room for a guy like Jordan (a converted TE) or Keliikipi or Heimuli to see extended playing time.