Part 9 in a series on Oregon's 2010 season opponents 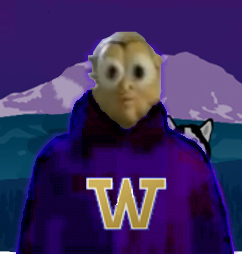 The Washington Huskies come into the 2010 season with a lot of buzz. Led by future top 5 draft pick Jake Locker, the Huskies were picked to finish 6th in the conference, a result that would be very impressive considering that the Dawgs went winless two seasons ago.

They improved greatly in 2009, not only in the win column, but with on-field play, and return a lot of talent from that team. The Huskies will be improved in 2010, but to contend in the upper half of the conference they must make large strides, which seems unlikely.

On offense, it's all about Jake Locker, one of the most physically talented QBs in the nation that has made a lot of progress under the Huskies second year coach, Steve Sarkisian. Locker improved his completion percentage, rating, and accuracy significantly last season, which was key in UW converting over 45% of their 3rd down opportunities. On 3rd down, Locker threw at a 64% rate. However, if Washington is going to compete with the best in the conference, Locker (and the rest of the offense) must improve on this performance. Locker showed flashes of greatness last season, but had below average performances against the better defenses in the conference.

A big part of this was that Locker was under pressure for much of the season. Washington's offensive line continued to be rather poor. They gave up a sack rate of 7.1%, a number that was lowered due to Locker's scrambling ability. The line did improve it's rushing totals, from the 2008 numbers (helped in part by Chris Polk's performance). But the simple fact is that this just isn't a very good offensive line. They struggle against good defensive lines, and have issues opening holes and protecting the QB, and can not succeed with consistency. The unit loses only one starter (LT Ben Ossai) and returns 8 players with starting experience, so improvement can be expected, but that's not really saying a whole lot.

The Huskies have been able to deal with a poor offensive line now that they have one of the better backs in the conference in Chris Polk. Last year he became the first Husky freshman to top 1000 yards on the ground. I expect him to match last years production and possibly improve. However, he is hampered by his line, and good defenses have been able to limit his consistency and effectiveness.

The Huskies, however, have a great advantage in keeping some pressure off the line and running game in its receiving corp. It's likely the best overall unit in the Pac-10, led by junior Jermaine Kearse. He's joined by Devin Aguilar and James Johonson, and last year the trio accounted for over 1800 yards and 16 touchdowns. They can spread the field, and demand respect of the safeties, which will only help the running game, and take a bit of pressure off the overmatched offensive line.

Overall, this is a very dangerous, yet inconsistent, offense. If they get going, watch out. There are a lot of weapons, and if they get a defense on their heels, they'll be able to move down the field quickly. But last years numbers are quite telling. This offense, at the end of the day, produced at a mediocre level. They will be improved, but it's simply unrealistic to think this team can make the jump to a top 25 offense. Top 50? Sure, but that will help you become a bowl team, and not much more.

The Washington defense returns a lot of players from a below average defense. Unfortunately, they lose two strong players from their one good unit last season: the linebackers. 2nd Team All Pac-10 Donald Butler and long time starter EJ Savannah and are gone, and replacing their production will not be easy. Mason Foster will do his best. He was #2 on the team in tackles last year and is regarded as one of the top linebackers in the conference. He will be joined by junior Cort Dennison and senior Victor Aiyewa. This unit will likely not produce at 2009 levels, though they have young talent that will pay off in later years.

On the D-line, the Huskies lose 2nd Team All Pac-10 DE Daniel Teo'- Nesheim, the Huskies career sack leader. He accounted for 11 of Washington's 28 sacks last season, a category that UW was surprisingly decent at last year. Replacing that production will be difficult, though the Huskies do return 9 of last years top 11 players. They could show some improvement, but with the loss of Teo'-Nesheim, it could prove difficult for the group to get a consistent pass rush.

Unfortunately, the Huskies return all of the secondary, a group that was pretty much awful last season. They ranked in the bottom 1/3rd of the country in almost every major passing category. Without a dominant front 7, this group will have a tough time getting to mediocrity. But watch out for true freshman Sean Parker, one of the top rated safeties in the nation, who may make an impact this season.

With so many returning starters, you can expect the Washington defense to improve, but what exactly does that mean? This group was below average last year, and if they become a mediocre NCAA defense, even with their influx of 2010 freshmen talent, that has to be considered success.

Their special teams will improve, especially with the influx of talent in their 2010 recruiting class. While a lot of those players will not play a significant time on offense or defense, they'll get a shot on special teams.

Washington is on the verge of being a bowl team, and will likely get there this season, but they are a few years away from contending with the upper half of the conference. They simply do not have the experienced talent in place to make the leap offensively or defensively. At best, they will be an above-average offense, and an average defense.

For their game with Oregon, the Ducks will have an advantage in almost every matchup. In Autzen, the Ducks should control this game easily.