Share All sharing options for: MBB Preview and Open Thread: USC at Oregon 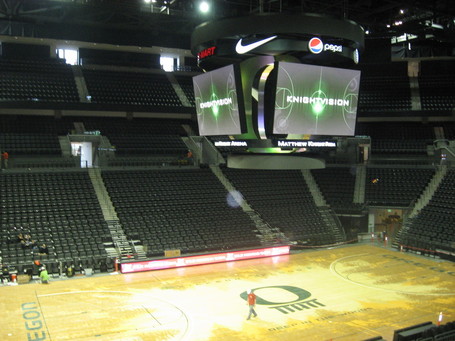 Oregon gets its new toy tonight, in front of a national TV audience as USC becomes the first team to take on the Ducks in Matthew Knight Arena.  Unfortunately, a Duck victory looks like a long shot tonight, as SC is on a roll, playing some of the best basketball in the conference over their last eight games.  Don't let the Trojans' 10-6 record fool you.  Yes, they have some not so great losses-blown out by Rider, and losses to Nebraska, TCU, and Bradley.  But SC is 6-2 in their last eight, with the only losses being to Washington (in overtime) and at Kansas (by two).  During that stretch, the Trojans have beaten Texas, defeated Tennessee in Knoxville, and taken down Pac-10 foes Washington State and UCLA.

We've seen this season that Oregon's already depleted roster is going to make winning just a few Pac-10 games a major accomplishment this season and, unfortunately, this one may be even tougher.  Malcolm Armstead, Jeremy Jacob, and Joevan Catron are all listed as game time decisions after their injuries at Washington State.  If we have a worst case scenario and none of those guys can go, we are looking at a starting lineup of Nared, Singler, Williams, Sim, and Loyd with a bench of Strowbridge, Seiferth, and a bunch of walk ons.  Ouch.

SC is led by Nikola Vucevic, the 6'10" forward averaging sixteen points and almost ten rebounds a game.  He'll be a tough guard even if Catron and Jacob play.  The's got a skilled, though finesse low post game, but also a deadly jumper that he's comfortable shooting as far out as the three point line (watch for the pick and pop).  Point guard Jio Fontain, the Fordham transfer, has been a force since becoming eligible six games ago, netting almost fourteen a game and hitting nearly 50% from three.  The Trojans aren't particularly deep, and they will only play eight guys, but most of their guards are as tall as our forwards.

Ken Pomeroy ranks SC the 37th best team in the country.  Offensively, SC won't wow you.  They average 68 points per game, and are significantly slower than average, with a pace ranking 308th in the country (64.1 total possession/game, or 3.5 fewer than the average NCAA team).  They rank a pedestrian 82nd in adjusted offensive efficiency (106.6 points/100 possessions.  They are an average shooting team, and don't really look to offensive rebound, preferring to get back on defense.
And this is where they excel, ranking 18th in the c

ountry in adjusted efficiency.  They have big bodies, and just suffocate you.  Catron and Jacob won't get anywhere in the post without finding a double team.  Everything will be contested and there will be few openings.  Opponents adjusted field goal percentage against SC is 43%--and we don't shoot anywhere near that against bad teams.  They're not going to force tons of turnovers as much as they're going to make you take a tough, contested shot.  Most teams miss the majority of these.  We will miss almost all of them.  There are few good matchups for us, USC is a terrible matchup.

KEYS TO THE GAME:

REBOUND:  One of the Trojans' weaknesses is that, despite their size, they are not a great rebounding team.  It will be extraordinarily difficult to get good shots against SC's halfcourt defense, so getting offensive rebounds and easy putbacks, as well as limiting the Trojans' opportunities to do the same, is a must to keep the Ducks in the game.

FORCE TURNOVERS IN THE PRESS:  For largely the same reason.  The Ducks are going to need cheap buckets to stay in the game.

PLAYER HEALTH:  Our chances to win this game are already very slim.  If Catron and Jacob can't play, this game will get really, really ugly.
This is the first game in our new house.  If you're going to be there, be loud, and make it the same intimidating environment that Mac Court was.  The place will be packed.  Here's hoping the Ducks can ride the wave of emotion, and maybe find some unexpected hot shooting, and notch the upset tonight.