Pac-12 Scheduling: Why the 9 Conference Games is a Terrible Idea

Share All sharing options for: Pac-12 Scheduling: Why the 9 Conference Games is a Terrible Idea

When I predicted before the 2010 season started that Oregon would go undefeated a big portion of why I thought that was due to the schedule. The out of conference games were not anything that was going to scare Oregon, but would allow them to get into a groove offensively and defensively as well as provide an early road test in Tennessee before a hostile crowd. Also, I loved the way that Oregon didn't have any back-to-back road games during the season. Lastly, the late season bye week following the Cal game was going to allow starters and key guys to get extra rest, and let any ailing players get healthy for the two remaining battles.

One thing that got a lot of discussion before the season was that 2010 was going to be the year that Oregon had the extra road game in their conference schedule, and they had to play USC, Cal and OSU on the road. That turned out to be a benefit as the three toughest teams on Oregon's schedule were Stanford, UW and Arizona and all three had to come to Autzen.

Unfortunately, I don't have the same feelings going into next year's schedule.

First off, I hate the 9 game conference schedule. I get why the Pac did it when there were only 10 teams. It made the conference unique. No other conference had a 9 game schedule and round robin format. It provided for a true conference champion in that every team played each other so there was always a head-to-head match up to look at. Finally, it allowed schools to only have to schedule 3 OOC games and reduced chances of schools struggling to find OOC games to fill out their schedules.

But with the new Pac 12, I think the 9 game conference schedule is stupid.

Don't get me wrong, I understand why they had to do it. With so many schools whining about getting to play the LA schools, you need that extra game to fit in more trips to So Cal (and do we really need to listen to Cal whine about something else). Also, with a new media deal coming, it allows Larry Scott the ability to sell more conference games to a network, instead of 12 extra games against "Little Sisters of the Poor." Unfortunately, it puts the conference at a disadvantage.

When there were only 10 teams, the Pac had to deal with 5 extra losses that other conferences didn't have. With 12 teams in the Pac, now there will be 6 7 (with the CCG loss) extra losses. When you are looking at polls or even bowl eligibility, it's the losses that matter. Adding 6 extra conference losses to the entire Pac means an automatic demerit in the eyes of voters and potential for less bowl eligible teams. That hurts Oregon when you look at strength of schedule, wins against ranked opponents, and wins against bowl eligible teams.

The continuation of the 9 game conference schedule also hurts Oregon late in the season. The addition of the conference championship game the first week of December, means all teams need to have their conference schedule wrapped up by the end of November. That means no bye weeks late in the season. Other conferences get around this by allowing teams to schedule patsies in the last couple of weeks. Auburn played doormat Chattanooga on November 6th. Alabama got to rest against Georgia St. the week before the Iron bowl. Those games allow coaches an extra week to prepare for the late season tests. It allows players that are borderline able to go, to sit out and heal. It also allows younger players a chance to get action late in a season, increasing depth and preparing them for future years. Oregon won't have that luxury. 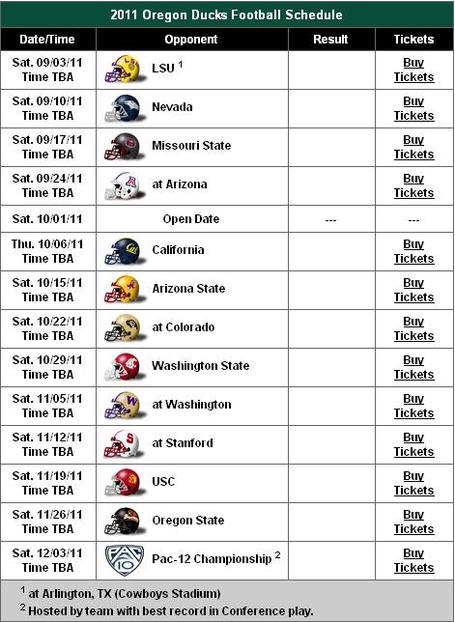 First of all, the OOC schedule is going to be worlds more difficult as Oregon will have to open the season in Arlington against most likely a top 5 ranked LSU team. The winner of this game will undoubtedly have an inside track to the BCS Champ Game, while the loser is going to need to make up serious ground in their conference games to have a chance at New Orleans. That's a pretty important game for any team, especially one that will be reloading over half their offensive and defensive lines.

But that's not the worst part of the schedule.

Stanford will most likely be the second best team in the Pac again next year, and Oregon is going to have to travel to Palo Alto the week after dealing with a pesky UW team in Seattle. A back-to-back road test that they didn't have to face this year and it will be Oregon's 6th straight game without a bye week.

Also, while it's a plus that Oregon gets to play against WSU (who will be much improved) and Colorado, it does miss out on a dysfunctional UCLA team and Utah, who will be trying to learn Norm Chow's brilliance and replace a number of starters. Additionally, I expect Cal and ASU to be much better this year and Oregon will get both of them back-to-back early.

Finally, when Oregon is preparing for the 115th Civil War they will be preparing to play their 8th straight game against conference opponents without a bye week. How nice would it be to see New Mexico at home in between those UW and Stanford road games? Think about how much the bye week has meant to Oregon the last couple of years going into the last couple of games of the season. I'm really worried about depth and recovery of players when we're getting late in November, and those games are against Stanford, USC and OSU... yikes.

Way too early for me to predict anything about next year, and I have total faith that Chip Kelly will have his team prepared week in, week out. But, this first year's Pac 12 schedule, combined with a road game against LSU, back-to-back road games at UW and Stanford late in the season, and no extra week of rest late in the year, make me extremely nervous about Oregon's chances of being undefeated in December.