12 Pac Review: Ucla gets shut out into the Championship Game, Oregon and Uw win their rivalry games

Share All sharing options for: 12 Pac Review: Ucla gets shut out into the Championship Game, Oregon and Uw win their rivalry games

Well the inaugural Pac 12 Championship Game is set and it's going to be the 10-2 Oregon Ducks in a rematch against the 10-2 USC Trojans against the 6-6 Ucla Bruins. Seriously, how sad is the South Division when the 3 teams that were vying for the first Division crown went 0-3 on the weekend. Also, 2 of the teams will most likely be looking for a new coach next year.

Oregon 49 vs Oregon St 21 – Oregon bounced back from their first home loss in the Chip Kelly era by taking out their frustration on the hapless Beavers. Oregon senior David Paulson had a career day as he caught 8 passes for 105 yards. There's still a lot of consternation among Duck fans however, regarding the play of Darron Thomas. My main feeling on this is it is really difficult to evaluate the play of the QB when his offensive line is still struggling to protect him, and his wide receivers struggle to get open against mediocre competition. The fact that Thomas has to go through so many progressions to find an open guy, should tell a lot about why he struggles with his consistency. If you don't know what I mean, let me just say this, Will Murphy played against LSU. Seriously, we threw a pass to Will Murphy on a critical 4th down, against LSU. So let's take Darron's consistency and stats with a giant grain of salt.

Stanford 28 vs Notre Dame 14 – Another efficient win for the Tree as they follow up their 11-1 2010 season, by going 11-1 in 2011. Too bad for Stanford they had to play Oregon in both those years. Anyway, Stanford as set themselves up for another BCS bowl. It will be interesting to see how things shake out given Stanford's struggles to support their team on the road. You have to think they are not going to jump to the guaranteed #4 slot in the BCS, so a 10-2 Michigan team might get the BCS nod over Stanford.

washington 38 vs WSU 21 – Well, it looks like the huskies finally found someone in the Northwest they can beat. Keith Price returned to go 21/29 for 291 yards and 3 TDs. The huskies will be going to a bowl game for the second year in a row, but it will be interesting to see which one. If Stanford falls out of the BCS, you have to think the Alamo is going to want to take them first, which means the huskies could drop to the Holiday. Although, Uw went to the Holiday last year, which means they could take Utah or Cal.

Cal 47 at ASU 38 – Cal really finished the season strong going 3-1 in their last 4 games, with their only loss being to Stanford in a close one. Zach Maynard made some really nice progression at QB and capped off the season going 19/26 for 237 yards against a beat up ASU secondary.

Oregon State – It was obvious from the beginning of the season that Mike Riley was using this year to build his youth. Unfortunately for the upper classmen and the Ryan Katz, they were the collateral damage in this process. I don't think James Rodgers worked his butt off in rehab in the off season to come back and be a passing dummy for Riley's project Mannion, but that's the way it turned out.

WSU – 4-8 and not going to a bowl is not what Coug fans were hoping for at the beginning of the year, especially given their early season schedule. QB injuries and other tough breaks along the way have fans looking forward to the basketball team in November once again.

USC 50 vs Ucla 0 – Boy what everyone wouldn't give for a rematch of USC and Oregon. Thanks a lot Reggie Bush.

Ucla – Instead we are going to be treated Ucla and the Weasel making a trip to Eugene. At least we'll get see this once again: 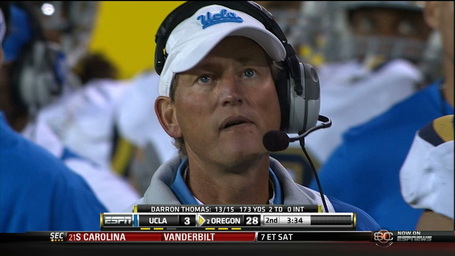 ASU – Saw a lot of "Fire Erickson" signs in Tempe Friday night. Needless to say, the natives are restless considering ASU returned 22 starters from last season and had a lot higher expectations than 6-6 after starting the season 6-2.

Utah 14 vs Colorado 17 – I know Utah has the Holy War, which is one of the greatest rivalries in college football, but getting beat at home by the other newest addition to the Pac to keep Utah out of the Pac 12 Championship game has to sting a little. I would love for this to become a nice budding rivalry between Colorado and Utah, and big losses like this usually are the genesis for that.

Colorado – Big road win for the Buffs. If Colorado can build their facilities, and increase their recruiting pipelines in California, it won't be long before Colorado becomes a force in the South.

Arizona – Who else is really excited to have Rich Rod in the Pac? I know I am.