Tako Tuesdays: I Find Your Quack of Faith Disturbing

Takimoto examines Chip Kelly, and comes to a startling conclusion. The Force is strong with him.

Share All sharing options for: Tako Tuesdays: I Find Your Quack of Faith Disturbing

His ascension to power was swift and silent. He took control without violence or impudence, but with cunning and an air of myth. He has not only held power despite institutional unrest, he has grown in stature and acclaim. His subjects fear him, but respect his wealth of knowledge and otherworldly power. From humble beginnings to the helm of a fledgling Pac-12 empire, the evidence has been laid out, plain and simple: Chip Kelly is a Dark Lord of the Sith. 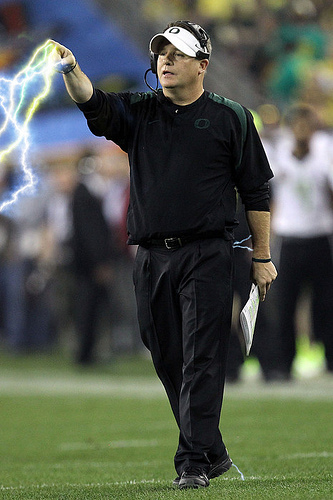 As legend goes, Chip Kelly was found by Darth Bellotti in a remote part of the galaxy called Naboo Hampshire. He was tapped as Darth Bellotti's apprentice due to his immense talent and the ability to forecast and manipulate time. His aggressiveness and penchant for speed made him a natural Sith. He took to his job well, striking terror into the hearts of enemies, and gaining a reputation as a skilled warrior. After two years, Darth Bellotti began to show his age, and Chip made his move, supplanting his former master and exiling him to the far reaches of ESPN's college football coverage. 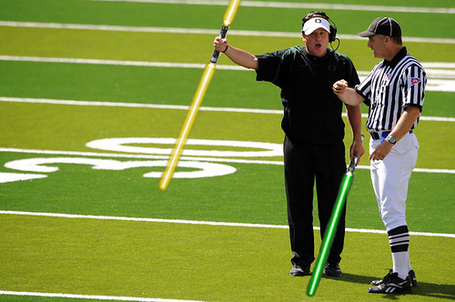 Perhaps his greatest achievement is creating a clone army of lightning-quick Ducks that can swarm the field and overwhelm any opponent. Take Josh Huff's injury for example. If Huff is still hindered come fall, players like Kenjon Barner, Lache Seastrunk, Nick Cole, DeAnthony Thomas, Tacoi Sumler, BJ Kelley, and Tra Carson could pick up the slack admirably. The clones give Darth Kelly's Ducks a never-ending supply of athletes with which to terrorize the rest of the country. The Sith Lord's subjects are loyal and tenacious, and are committed to the cause of total galactic domination. 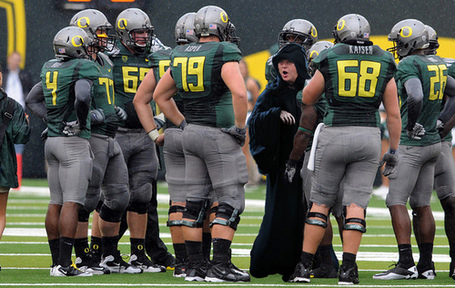 With Darth Kelly as the new master, who has he taken as his apprentice? Nick Alliotti is a possible candidate; his increased aggressiveness in his play calling would suggest that he is under Kelly's tutelage. But he was passed over once already by Darth Bellotti, and Darth Kelly would be wise to be wary of his vengeful potential. Aliotti's role in this story is as a Grand Moff, rather than an agent of the Force. It could have been Jeremiah Masoli, but he proved to be too impulsive, and not in tune with his thoughts. My guess would be wide receivers coach Scott Frost; he is young, talented, and full of potential.

Chip Kelly is a Sith Lord in every way. He speaks cryptically, never letting others know his true feelings; he deals in absolutes, treating every day as a win/lose scenario; he levies harsh discipline against anyone who dares to act out against his values. The Oregon Ducks are the new empire in the Pac-12. And as much as I rooted for Luke and the Rebels, it feels pretty damn good over here on the dark side.

A big thanks to trumpetduck, who did all the Photoshop magic. 'Shopped photos linked from my Flickr. Original photo credits: