Over at EDSBS, they've organized an effort to attract donations for a worthy cause -- Getting Orson A Tattoo. It's the EDSBS Annual Fundraiser.

Actually, the cause is Refugee, Resettlement, and Immigration Services of Atlanta, a subsidiary of Church World Service and Episcopal Migration Ministries.

They help resettle refugees to the United States, presumably to become upright contributing members of society, or college football fans, hopefully both. Getting a tatt on Orson is just a bonus. 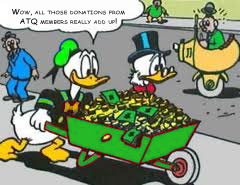 This being EDSBS, they're keeping track of how the fans of each school are coming through, just like with the Fulmer Cup. Sad to say thatOregon as of now doesn't appear to be on the radar of schools that have donated significant amounts.

I AIM TO CHANGE THIS, and in order to set a good example, I've contributed $65.38 to the cause. (The concept is that you donate an amount corresponding with the score of your most memorable rivalry game. I'll be kicking in another $58.00 later.)

Who will join me? Think of all the great donations you could make. Heck, just donate $42.17 and it'll cover the last seven years of UW games!

Warning: Don't even think about donating based on the score of the 1983 Civil War.