Share All sharing options for: The ATQ All-Time Oregon Football Fantasy Draft - Part 1: The First Round

Everybody gets bored and quack-starved during the painfully long offseason, even the ATQ moderators. We love all Duck sports, but football is king, and rightfully so. We are the "It" program in college football right now, and the mods love to talk pigskin at all hours of the day. Through our discussions, we came up with the idea for an Oregon football mega-draft. After arguing semantics for a good six hours, here are the rules we eventually came up with:

- The six mods participating (me, jtlight, ntrebon, David Piper, PaulSF, and Matt Daddy) will each select 24 players: a starting offense and defense, along with a kicker and a punter.

- When you draft a player, you own the rights to every season he played. So we aren't drafting individual seasons.

- The position spots call for two RBs, two WRs, one TE, and a 4-3 defensive front. If a player played more than one position while at Oregon, they can fill either spot on a roster.
- The draft order was chosen at random.  jtlight won the first pick, followed by ntrebon, David Piper, Takimoto, Matt Daddy, PaulSF.
- The order will progress snake style, so Paul will get picks 6 and 7, Jared will get 12 and 13, etc.
- Once the draft is finished, we will set up a tournament where you, the reader, will get to vote on whose team would win on the field (or is just your favorite).
After the jump, the results of the first round of the draft.

2. ntrebon - With the second pick, I'll take Jonathan Stewart.  Injuries concerns notwithstanding in his first few seasons, Stewart is the most physically talented back ever at Oregon.

3. David Piper - With the third pick, I take... QB Akili Smith. After seeing the first two picks, I told myself I was going to take the best quarterback availiable.  You'd assume this is a battle between Joey Harrington and Dennis Dixon, but why pick one when you can have the best of both in Akili Smith?  He could throw (342 yards per game in 2008, 30 TDs to 7 INTs).  He could run (as mobile as Dixon with twenty more pounds on his frame).  With a team far less talented than the other two QBs are noted for, he had them undefeated in 1998, until Reuben Droughns broke his leg, and completely took over the team and led them to within six points and three overtimes of a Pac-10 title in spite of average offensive weapons and a bad defense around him.  The highs of the 2001 and 2007 teams make us forget just how dominant of a player Akili Smith really was.  I want the best, most complete quarterback guiding my team.  I now have that.

4. Takimoto - The numbers speak for themselves: 25-3 record. 59 touchdown passes. Nearly 7000 passing yards. A three-year starting run that propelled Oregon to their first taste of that elite college football air. And he capped his career with one of the best passing performances in BCS bowl history, throwing for 350 yards and 4 touchdowns in the Ducks' thrashing of Colorado. With the fourth pick in the ATQ fantasy draft, I select Joey Harrington.

5. Matt Daddy - High school athletes are not choosing to come to Oregon to become the next Akili Smith.  No recruit has been interviewed recently and said they want to be the next Joey Harrington for the Oregon Ducks.  If we were selecting coaches, most of us would likely take Chip Kelly as our head coach.  For that reason I am taking the one player that fit Kelly's offense the best and has had one of the most lasting impacts on recruits and the Oregon offense.  With the 5th pick in the ATQ Fantasy Draft, I select Dennis Dixon.

6 and 7. PaulSF - Some may argue size matters. But like Cliff Harris, I'm addicted to speed. And I plan to build my team around it. So, I'll fill my backfield with the two fastest backs in Oregon football history. With the 6th and 7th picks in the ATQ Fantasy Draft, I select Mel Renfro and LaMichael James.

Well there you have it. One round (plus one pick) in the books. There will be more to come as the summer drags on, so stick around for the rest of the ATQ Fantasy Draft! And to leave you with one final tease, here's a look at the tournament bracket: 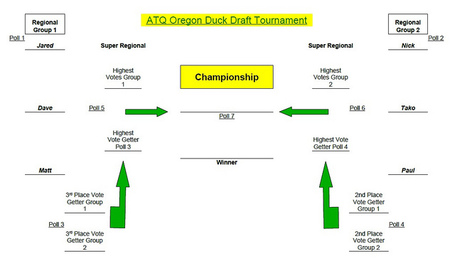