[This post is intended for mature audiences.  It is rated NSFW, for strong language and violence.  Parental guidance is strongly suggested.  Enjoy.]

The media is obviously trying to keep hidden the records of what Chip Kelly and Oregon have said to the NCAA.  Will Lyles is secretly working with the media to tarnish the reputation of Oregon in hopes of making back the $25,000 that he didn't receive from Oregon.  Coach Kelly has determined the whereabouts of the secret documents that exonerate him and Oregon and has dispatched two of his graduated pipe-hitting motherfucking linebackers to retrieve it for him.  Spencer Paysinger and Casey Matthews are standing outside the apartment where Lyles, Brooks and Tannen are inside.  In the bathroom Matt Prehm is eavesdropping trying to pick up some some recruiting tidbits, and as Paysinger and Matthews enter he stays hidden.

[to Steve Tannen laying on the couch]

SpittyP: Hey, keep chillin'. You know who we are? We're associates of your news whippin' boy Chip Kelly. You do remember your whippin' boy don't you? Now let me take a wild guess here. [scanning around the room] You're Brooks, right?
Brooks: Yeah.

SpittyP: I thought so. You remember your whippin' boy Chip Kelly, don't you, Brooks?
Brooks: Yeah, I remember him.
SpittyP: Good. Looks like me and Casey caught you boys at breakfast, sorry 'bout that. What'cha havin'?

Brooks: Pizza.
SpittyP: Pizza!! The cornerstone of any nutritious breakfast. What kinda pizza?
Brooks: Hawaiian pizza.
SpittyP: No, no, no, where'd ya get em? Dominoes, Pizza Hut, Papa John's?
Brooks: Track Town Pizza.
SpittyP: Track Town Pizza! That's that Oregon Ducks pizza joint. I hear they got some tasty pizza. I ain't never had none myself, how are they?
Brooks: They're good.
SpittyP: You mind if I try some of yours? [Pointing at his pizza] This is yours here, right?
Brooks: Sure

[SpittyP grabs Brooks's pizza folds it in half and takes a big bite of it.]

SpittyP: Uuummmm, this is some tasty pizza. Casey, you ever try Track Town pizza?

[Casey shakes his head no]

SpittyP: Well, if you like pizza give 'em a try sometime. Me, I can't usually get 'em myself because I'm trainin' for the NFL which pretty much cuts out all carbs. But I do love the taste of some good pizza. Mmm. You know what they call pizza in NY?

SpittyP: A sliiiice! You know why they call it that?

Brooks: Because of east coast bias?

SpittyP: Check out the big brain on Brooks! You're a smart motherfucker. That's right. The east coast bias. What's in this?

[pointing to the cup of drink in front of Brooks]

SpittyP: Ninkasi, good. You mind if I have some of your tasty beverage to wash this down?

SpittyP: [takes a long sip of the drink] Aaah, that hit the spot.

[Cleans off hands and turns to Tannen on the couch]

SpittyP: You, flock of putz, you know why we're here? Why don't you tell my man Casey where ya got the shit hid at.

Will Lyles: It's over there.

SpittyP: I DON'T REMEMBER ASKIN' YOU A GODDAMN THING! You were sayin'.

Tannen: It's in the cupboard

Tannen: No, no the one by your kn-knees

[Casey rattles through the cupboard and pull out a briefcase]

SpittyP: We happy? Casey! We happy?

Brooks: Look, I'm sorry, ah I didn't get your name. I got yours, ahh Casey, right? Bu-but I ne-never got you...
SpittyP: My name Spit and yo ass ain't talking your way out of this shit

[Brooks starts to stand up...]

Brooks: I just want you to know how...

[SpittyP motions for him to sit back down]

Brooks: I just want you to know how terribly sorry we are that-that things got so fucked up with us and Mr. Kelly. It-it-it, we got into this thing with the best intentions. Really, I never...

SpittyP: Oh, I'm sorry did I break your concentration? I didn't mean to do dat. Please continue. You were saying somethin' about, "best intentions?"

SpittyP: Oh, what's the matter? Oh, you were finished. Well, allow me to retort.

SpittyP: [Turns over the table in front of Brooks] What paper do you work for?

SpittyP: "What" ain't no paper I ever heard of! They write in English in "what"?

SpittyP: Then you know what I'm saying!

SpittyP: [pointing his gun] Say "what" again. SAY "WHAT" AGAIN. I dare you, I double dare you, motherfucker. Say "what" one more goddamn time.

SpittyP: Well there's this game I got memorized, kinda fits the occasion. WinTheDay 65:38. "The path of the righteous man is beset on all sides by the iniquities of the bavers and the tyranny of evil huskies. Blessed is he, who in the name of Autzen and Casanova, shepherds the sheep through the corn-valley of darkness, for he is truly his little brother's keeper and the finder of fumbled footballs. And I will strike down upon thee with great players and furious formations those who would attempt to fake injuries and slow my offense. And you will know my name is the Genius when I lay my tempo upon thee."

Just then Prehm, realizing he's not getting anymore recruiting scoops, busts out of the bathroom... 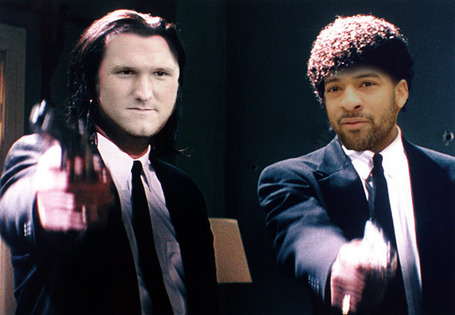