The Will Lyles Timeline

Share All sharing options for: The Will Lyles Timeline

For everyone that is trying to wrap their arms around what exactly happened and how Oregon became associated and intertwined with someone that appears to be going on an all out media blitz to save his name and reputation, I thought it would be a good idea to put together a timeline of what has happened and look at the relevant links and information out there.

Some of this information was started by Loudquack96 over at Duck Territory and the rest has been complied by myself.  If you find inaccuracies or want clarifications, please feel free to leave them in the comments. 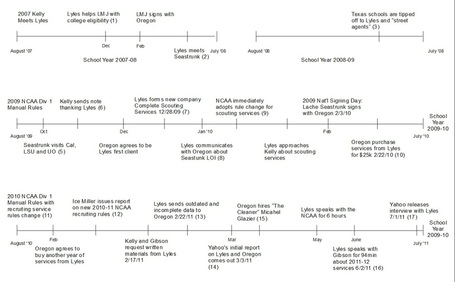 Footnotes after the jump...

(1) In 2007 Lyles helped LaMichael James avoid a standardized test required by Texas high school students for graduation, by figuring out that if James transferred for his final semester to a high school in Arkansas, the standardized test would not be required. One of the things missing from Yahoo's report was the fact that James' grandmother (who had raised him) had recently died and he was struggling with life especially considering he was living on his own.

(2) Lyles was a coach for Seastrunk's 7-on-7 team with along with Texas QB Connor Wood. Allegedly, Jeff Wood, Connor's father helped pay for study courses at Sylvan Learning for Seastrunk which was arranged by Lyles.

(3) Texas blogs pick up Texas schools losing out on recruits to LSU, Alabama, Auburn, USC, Tennessee and Oregon. According to Lyles, when high school coaches got wind that players were working with him, they called coaches and recruiting coordinators at Texas Universities.

13.14.3.1 Published Recruiting Services. An institution may subscribe to a regularly published scouting

service involving prospective student-athletes, provided this service is made available to all institutions desiring to subscribe and at the same fee rate for all subscribers.

13.14.3.2 Video Services. Member institutions are permitted to use video services, provided only regularly scheduled (regular season) high school or two-year college contests are involved. The institution may not contract with the service in advance to have a particular contest recorded or provided, and the service must be available to a video made available by a scouting service is considered an evaluation activity and is subject to applicable evaluation regulations. (Revised: 9/15/97)

13.14.3.3 Effect of Violation. Violations of Bylaw 13.14.3 and its subsections shall be considere all institutions at the same cost. Off-campus observation of a prospective student-athlete institutional violations per Constitution

(5) According to the Canzano interview with Will Lyles, Lyles accompanied other recruits on their visits to LSU.

(6) Kelly sends a note to Lyles thanking him for helping get recruits out for a visit to Oregon.

(7) On December 28th, 2009, contrary to some media reports, Will Lyles registered his business, Complete Scouting Services with his county.

(8) Josh Gibson and Bill Clever, employees of Oregon's compliance department, communicate with Will about the rules regarding having a grandparent become the guardian on a letter of intent.

(9) The NCAA adopted rule changes to what is considered a recruiting service. Most NCAA rule changes take effect starting in August of the next year. This rule change however was pushed through the Amendment Process immediately and took affect 19 days after Lyles registered his company.

(10) Here is a complete listing of all the purchase orders for Oregon going back to 2008 including the one from Complete Scouting Services and Will Lyles for $25,000.

(11) Here is the updated NCAA bylaw regarding recruiting services that was revised 7 months earlier and is now being released in its annual Manual Report.

13.14.3 Recruiting or Scouting Services. An institution may subscribe to a recruiting or scouting service involving prospective student-athletes, provided the institution does not purchase more than one annual subscription to a particular service and the service: (Adopted: 1/1/02, Revised: 1/16/10)
(a) Is made available to all institutions desiring to subscribe and at the same fee rate for all subscribers;
(b) Publicly identifies all applicable rates;
(c) Disseminates information (e.g., reports, profiles) about prospective student-athletes at least four times per calendar year
(d) Publicly identifies the geographical scope of the service (e.g., local, regional, national) and reflects broad-based coverage of the geographical area in the information it disseminates
(e) Provides individual analysis beyond demographic information or rankings for each prospective student-athlete in the information it disseminates; (Revised: 4/13/10)
(f ) Provides access to samples or previews of the information it disseminates before purchase of a subscription; and
(g) Provides video that is restricted to regularly scheduled (regular-season) high school, preparatory school or two-year college contests and for which the institution made no prior arrangements for recording. (Note: This provision is applicable only if the subscription includes video services.)

(12) Ice Miller, one of the largest law firms in Indianapolis (city of the home office of the NCAA) provides a recap of the recent NCAA Convention and the annual meeting of the Collegiate Commissioners Association Compliance Administrators regarding the changes to the definition of recruiting services and the implication for compliance departments records. The parts to note are:

The archived interpretation basically says an entity would be considered a recruiting service if the entity (or a part of the entity) is primarily focused on providing information or evaluation about prospective student-athletes to college coaches. This interpretation is a bit vague and leaves room for interpretation by both the companies and the colleges coaches they work with and whether the NCAA criteria would apply (pg 5)

Given the fact that a year has gone by since the new criteria has been established and companies may disagree with their designation as a recruiting service, additional NCAA interpretations or educational columns to help clarify what constitutes a service could be on the horizon. (pg 8)

(13) Oregon receives a number of documents from Lyles to substantiate their services together over the preceding year. Most of the documents look out of date, incomplete, or completely inaccurate. Including a 2010 National High School Evaluation Booklet that includes players from 2009 as well as a player that was deceased. Lyles explained that he threw the booklet together after an urgent request from Oregon officials asking for "last minute stuff." Considering this was near the last day that Oregon had Lyles under contract for services, and there was a recent national convention regarding the compliance of recent rule changes to recruiting services, Oregon may have been trying to build a paper trail to go along with their video, text and verbal communications with Lyles over the year to justify the purchase of his services to compliance.

(14) March 3, 2011 Charles Robinson, of Yahoo, releases his initial report regarding Oregon's payment to Will Lyles and Baron Flenory for scouting services. Oregon immediately goes into "radio silence" and has consistently communicated that they believe "they have not done anything wrong."

(15) Around the same time as Yahoo's initial report, Oregon hires Michael "The Cleaner" Glazier to represent them to the NCAA by putting him on retainer for up to $150,000 and advise them on how they should proceed with the NCAA investigation.

(16) After having a 6 hour interview with the NCAA where Oregon, Seastrunk or Kelly are not discussed, Lyles calls Oregon and speaks with Josh Gibson for 94 minutes about renewing their arrangement for another $25,000 for the 2011-12 recruiting class. Allegedly they discuss whether or not Lyles is going to receive payment for the year, where Lyles later discloses that Oregon has backed away from their agreement and will not be using his services anymore.