Tako Tuesdays: How do I love thee? Let me count the TDs!

Share All sharing options for: Tako Tuesdays: How do I love thee? Let me count the TDs!

It's Valentine's Day, ATQ! It's a day that began with a few martyred Catholics who became a front for converting a pagan fertility ritual into something stuffy and all church-y, and has now evolved into a gajillion dollar industry for Hallmark, candy hearts that taste like chalk, and, ironically enough, a Pagan fertility ritual. But before all else, Valentine's Day is about love, and spending time thinking about, and being with, those you love most. And my Valentine this year is someone who took my breath away the first time I laid eyes on them. The courtship was a whirlwind; were these just moves being put on me, or is this really the real thing? I don't know, but I'm willing to take a chance with my heart. That's why my 2012 Valentine is De'Anthony Thomas. 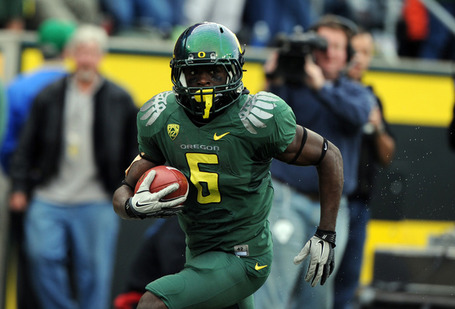 Ahhhh, isn't he the dreamiest?

De'Anthony Thomas 69 yd. reception vs Nevada for TD (via madmike1951)

At the time, that was the sickest head fake we'd ever seen on a football field. Then he did this:

He took that same little quick head fake, and he did it FOUR TIMES in five yards.

The timing of this play swung the entire scope of the Rose Bowl. Almost every coach in college football chooses not to run that play. Let time expire, and run it in the second quarter. Any momentum Wisconsin had built in the first quarter was gone. And it was at that this point that the Wisconsin fans sitting around me at the Rose Bowl gave up all hope of watching their defense stop the Oregon offense. One Badger fan said simply, "Welp, it's a shootout."

Now I know what you're all thinking; "Tako, he's too young for you, loving him would be a conflict of interests with your work on the blog, you've never spoken a word to each other." None of that matters! Let's consider the facts:

As an Oregon fan, I'm new at this whole "dating the hottest thing in town" thing. I'm used to dating within my element: nice personalities who work hard to make me happy (Nick Reed), funny guys (Carson "My favorite Duck on Twitter" York, Terrell "Rollin' Live with 45" Thomas), bad boys (Cliff Harris, Jeremiah Masoli) and guys I loved when they weren't that hot, but got really hot over the summer (Dennis Dixon). But De'Anthony is a new breed of Oregon football star. You can see the foundation laid by Bobby Moore, Mo Morris, Jonathan Stewart, and LaMichael James. But De'Anthony Thomas is the leap, the penthouse, the astronaut. There is no play he could make on a football field that would surprise me anymore, but it doesn't mean I won't still be amazed. Happy Valentine's Day, Mamba.