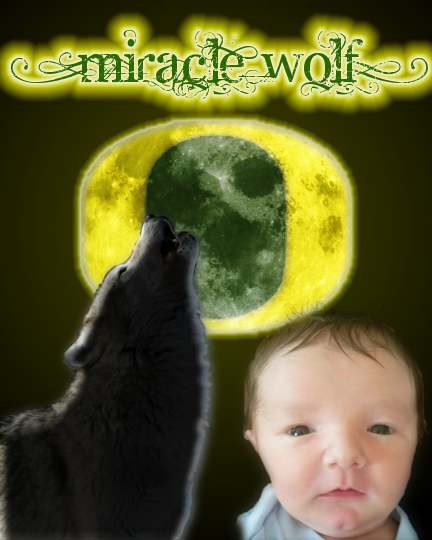 Two years ago after scudderfan won the annual ATQ Bracket Challenge, he suggested we take his prizes down to the Athletic Department and see if Chip Kelly would sign them so we could auction them off and give the proceeds to a very worthy cause.

You see, one of ATQ's members had a child that was born with a debilitating disease called Osteogenesis Imperfecta. It's a disease that effects the connective tissues of the bones, causing brittleness. Children go through life breaking bones and in tremendous pain from the simplest activities.

So we took scudderfan's idea and ran with it. Axemen23 contacted Chip Kelly and asked if he could come down and have him sign a visor for our auction. Kelly obliged and even contributed a signed football. Qrsouther contributed an autographed Mike Bellotti football and The Sports Brewery chipped in an autographed Ernie Kent basketball. We also put up a widget for people who weren't fortunate enough to win an item but still wanted to contribute. In all this little community was able to raise over $1,200 that went straight to the people needing help battling this disease.

Well scudderfan is at it again.

Yep, that's right scudderfan was the runner up to the Jersey Contest this year and once again he sent me an email saying he'd like to contribute his items to be autographed and auctioned off. I got in touch with Gorby and Axemen to see how to make this work again and here is what we found.

First the bad news. The Athletic Department and compliance office are putting some pretty strict new requirements on getting autographs from the players and coaches. There is a request process, an application, some TPS reports, and well, let's just say our little blog didn't make the cut.

But that's not going to deter us. WWWD? (What Would Wolf Do?)

Axemen reached out to a couple of people and we have put together a pretty exciting list of items that we will be auctioning off:

Axemen23: A signed Dennis Dixon Game Worn Jersey #2 from the Pittsburgh Steelers
Benzduck: 4 Poster-Sized Program-Prints ($80 total value)
Scudderfan: 3 ATQ shirts (This one This one and This one)
Axemen23: 2011 BCS National Championship Game Media Guide (not sold to the general public, you had to pick one up at a press conference).
The Daily Emerald: A Daily Emerald pint glass, and their special Rose Bowl poster
President Dave Frohnmayer: The attached rose bowl picture from 1995.

We will also have the widget up so if you're not able to win one of the auction items but would like to, you can contribute directly to the cause.

All funds will go directly to the OI Foundation in Wolf's name and his contribution will be listed in their "Breakthrough" quarterly newsletter.

This is only the primer post. In the next week we'll have more details on when the auctions start, pictures of the items, and details on how you can help. Besides bidding and contributing we're going to ask you to pass along this information using Facebook, Twitter or your own blogs.

Thanks to each and every one of you that have already helped in putting this together and to those that will help going forward. Looking forward to another incredibly successful fundraiser.