Well, if you've been following the ATQ Fantasy Draft, you have a pretty good idea of the team you think is best. So here is the layout to the tournament: 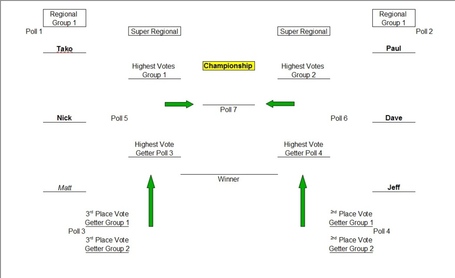 Each owner has a chance to tell you why you should pick his team. The explanations are after the jump:

Tako - My team is built to win. It has a proven point guard in Kenya Wilkins, a pair of All-American on the wings in Jim Barnett and Charlie Warren, and the best frontcourt in this tournament in Maarty Leunen and Greg Ballard. If I sub in Chuck Rask for Wilkins, now I'm playing four All-Americans at once. Dominance. Rask, along with Richard Lucas and Jamal Lawrence, gives me a multitude of different lineup looks I can put on the court: I can slide Maarty to the 3, and play an unstoppable three big-man lineup, I can team up Wilkins and Lawrence for high-energy scoring, or I could go three-guards and play Maarty, who always played defense bigger than his 6'9" size, at center. I have the most versatile team, the best collection of forwards and centers, and no team is going to outrebound me, or shoot a higher percentage. My team will make our shots, prevent second chance points, hit threes, and win. Lots and lots of win.

Nick - My team is the ultimate Ernie Kent team---except for the whole Stan Love thing. Beyond that, it's a team that has a great point guard, can score from all over the court and will probably have problems on defense. For offensive fire power, all five of my starters led their teams in scoring at least once. I have three of the top-10 3 point shooters of all time, including the most prolific in Porter, who I strongly believe will be more like his freshman edition with his only responsibility being to spot up and shoot as he will be paired either Ridnour or Wright paired with him in the backcourt. My team also sports three of the top-10 rebounders in school history. Off the bench, I again went guard heavy, choosing to reinforce the all-important PG position (Wright) and adding another prolific long-distance shooter (Davis). This is a team that can score at will (and will probably need to), and would be a ton of fun to watch.

Matt - There are little weaknesses with this team. Sure there are probably teams with greater star power, or teams that have a better scorer, but from top to bottom, my team is as well rounded as it gets. I have defense in Armstead at the point (a position of strength for more teams, but I have one of the better defenders), I have loads of rebounding with Jackson, Loscutoff, and Peterson, and have guys that can play inside (Jackson, Jones) as well as outside (Taylor, Joseph). I would take my team head to head with any of the other fantasy teams, and I'd know there is not one weakness they'd be able to exploit.