When Tennessee Tech blocked Oregon's field goal in the second quarter of Saturday's game, the response from Duck fans was a collective sigh, as it signaled more trouble in the field goal game, the only aspect of football where Oregon has been consistently poor over the last season plus. Most field goal blocks come from the interior of the line--either a big lineman is able to get his hand up, or gap is opened up for a rusher to shoot and attempt to block the field goal. This is especially the case on extra points or field goals from the middle of the field. From the hashmark, there is another option, where you have quick rushers off the end try to swarm in and try to block the kick from the outside. This is what happened on this play, but it was still very unorthodox. Here was the formation: 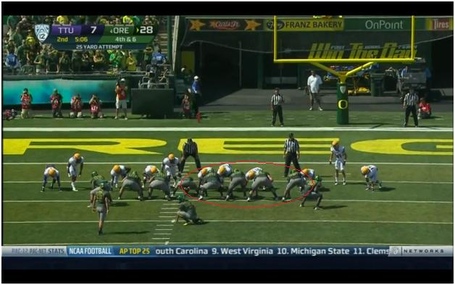 A field goal block off the edge almost always comes from the wide side, that is, the side from inside the hash. Its done that way because of the angle of the kick--the kicker is kicking the ball through the uprights. Unless you completely blow up the kick of the foot, you have to come in from the wide side to hope to get a hand on it. Because of this, its commonplace (and often automatic) for teams to run an imbalanced line on field goals from the hash, and you see Oregon doing so here, as they have moved the left tackle to the right side of the line to add extra protection and increase the distance that a would-be blocker must travel to block the kick. To get a block from the other side is so unlikely, teams for the most part don't even worry about it. Obviously, everything developed just right, and the improbable happened here. 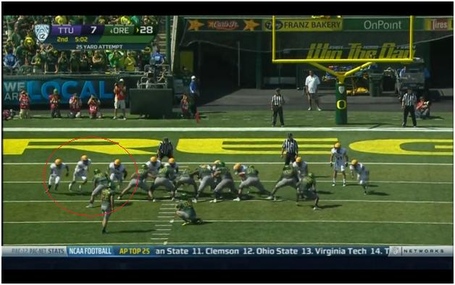 The tight end and the left guard block toward the interior, leaving a bad 3 on 1 matchup on Oregon's wing. The line should have recognized this, but instead, we're left with 3-1 on the outside and no blocking assignment for the snapper. Even still, given the improbability of a block from the short side, the important thing is for the wing to hold his right foot in place, making the gap between him and the tight end as small as possible, and just impede the next rusher over long enough for Beard to get the kick off. It's practically impossible for the outermost rusher to get the ball. 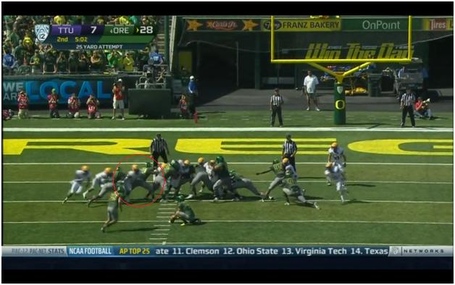 Even with that bad matchup for Oregon, the play only works for Tennessee Tech because the rusher is able to shoot the gap so cleanly. The two lineman on that side of the ball were already successfully sealed off, but the tight end went the extra distance to get a body on the defensive end, opening up the gap. 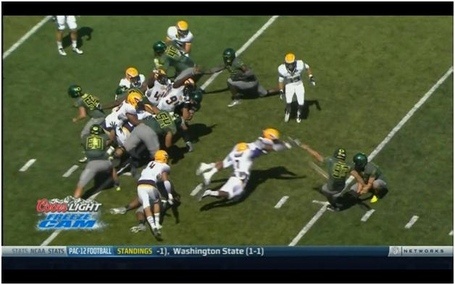 As you can see here, despite the unimpeded progress, the outermost rusher indeed is not able to get to the kicker. Its that innermost rusher who gets the football because he gets such a great jump through the gap. Its the only way he has time to get to that kick on short side. Great and fortunate play by Tennessee Tech on a play that you very rarely see, and something that will make for interesting film study for the Ducks' special teams unit.