VIKING HELMETS AND MAYONNAISE UP EVERYBODY, YEEEEEEEEEEE HAW!

Oregon takes on UCLA in what should be the Ducks' biggest test to date in 2013. Oregon hasn't faced a quarterback better than Brett Hundley, nor a defensive player better than Anthony Barr, and the Bruins proved themselves up to the task of winning on the road with their 41-21 win, in Lincoln, over Nebraska. They are led by head coach Jim Mora, a no-nonsense guy who has brought a "business-first" attitude back to Westwood, an attitude that has made them the best college football team in southern California. He's gruff with the media, a savvy recruiter, and a fiery and trusting leader that has earned the trust of the players with the mental fortitude necessary to play for a guy who will shut down practice if he doesn't feel the team is giving effort. He's got the program on the right track, and in the recruiting hotbed of SoCal, the Bruins should be a perennial force under his leadership. From UCLA's standpoint, and a Pac-12 conference standpoint, those are good things.

But I am a spiteful man, nourished by schadenfreude and quenched by unrest. This Jim Mora era is rife with stability, trust, and a generally positive atmosphere. Gross. That's not what I like in my opponents. I like my opponents fighting with each other, losing games they shouldn't, and generally underachieving in all facets of the game. In my perfect world, every team the Ducks face would be coached by a sinister and befuddling combination of a hammerhead shark, a Claymation elf, and Cookie Monster. But where would I find such a man? 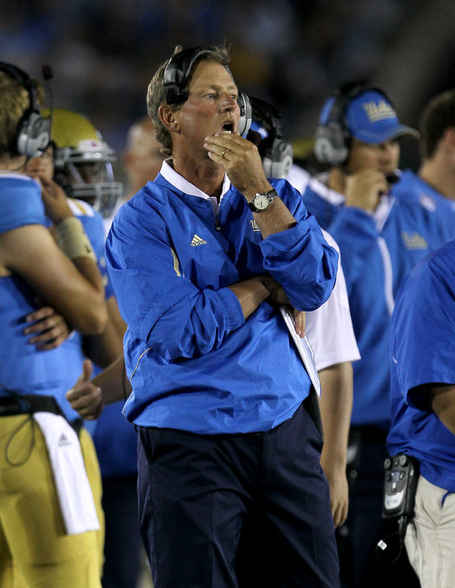 Hellooooooo sailor. That's a mighty fine windbreaker you've got there. Have you given any thought to rejoining the ranks of coaching? Because some of us around here miss you.

In 2011, UCLA - by virtue of USC being on NCAA timeout and everyone else being gawd-awful - ended up the de facto Pac-12 South champions, and headed to Autzen to face Oregon. If UCLA were to somehow pull the upset, they would win the Pac-12 and head to the Rose Bowl. Now, UCLA athletic director Dan Guerrero has a Master's degree from Cal State Dominguez Hills, and is therefore an intelligent human being. Chianti Dan knows that he can't fire the coach of a Pac-12 championship team; he'd have to instead keep The Weasel on for at least another year, when no one in the program - including, probably, Neuheisel - wants that to happen. So Rick Neuheisel gets fired, the week before his team plays in the conference championship game. He coaches the championship game anyway, and loses.

And after that, Oregon fans were left without a true villain head coach in the Pac-12. The search for a new heel was fruitless:

Mike Riley? Please. Mike Riley would feed and walk your dogs for you if you went on vacation. It doesn't matter where you live, or who you root for, he'll come on over and make sure the water bowl is filled because that's just the neighborly thing to do.

David Shaw? As if. David Shaw is the oatmeal of coaches; some people really enjoy oatmeal, and others don't have a taste for it. But no one in the history of the world has ever harbored deep-seeded vitriol and malice towards oatmeal. Bland and nutritious.

Steve Sarkisian? He coaches the hated Huskies, a good start. But he just doesn't have that hateful personality trait. Like Mora, he seems more genuinely interested in getting his program back to a place of title contention, and less about antagonizing. And besides, can you really hate a guy who looks like a lemur?

Lane Kiffin? Not quite. Sure, the snarky attitude and shady principles are there. But there's no method to his madness. He's just as likely to make some backhanded comment to the media about Hawaii or Georgia Tech as he would UCLA or Oregon. His teams were just as likely to upset a top 5 team as they were to toss up a snoozer and lose by 20 in Tempe, AZ (which is one of Kiffin's favorite hobbies, along with needlepoint and killing ants with a magnifying glass). Lane Kiffin is the seagull who shits in your French fries; Rick Neuheisel was the bully who would knock the fries out of your hand and pour your milkshake on your head. You dislike them both, but in wildly different ways.

None of the other coaches fit; Sonny Dykes and Mike McIntyre have had neither the time nor the team to make any noise thus far, and Kyle Whittingham hasn't played Oregon yet since joining the Pac-12. Todd Graham has potential, but the Sun Devils won't see Oregon in the regular season until 2015, and who knows where he could be by then?*

*Baylor, after Mack Brown retires and Art Briles leaves for Texas. Book it now, it's happening. Have fun with Jeff Tedford, ASU fans.

There's only one hope for us. He's not the opposing coach we deserve, but he's the one we need right now. He may be over at the Pac-12 Network (doing a pretty damn good job, I might add), but I will honor his hard work, his constant trolling of the Oregon fan base, and his mismanagement of three national championship football programs by reinstating an ATQ tradition during his time as Head Bruin in Charge.

This Saturday, new regime be damned, will be declared henceforth as Weasel Stomping Day.

Feel the hate flow through you...good...gooooooood...