Oregon Up to Fifth in the BCS Standings, Now Rooting for Weirdness

Share All sharing options for: Oregon Up to Fifth in the BCS Standings, Now Rooting for Weirdness

Stanford's loss to USC not only propels Oregon to the top of the Pac-12 North, but moves the Ducks back into the BCS top five, after falling out a week ago. Alabama remains #1, but Florida State gained ground after the Crimson Tide's lackluster 20-7 win over Mississippi State. Ohio State holds a slim lead over Baylor for the "next man up" spot, but an impressive win by Baylor over Oklahoma State this week could propel the Bears to #3 after next weekend.

And then there are the Ducks. At #5, Oregon is the top one-loss team in the country. The formula for Oregon is simple: win. Thanks to Eddie O and the Scrappy Five-Stars, Oregon is back in the driver's seat to win the Pac-12 North and host the Pac-12 Championship game against either Arizona State, UCLA, or USC. Win their next three games, and Oregon will remain in the BCS top 5, and go to the Rose Bowl. 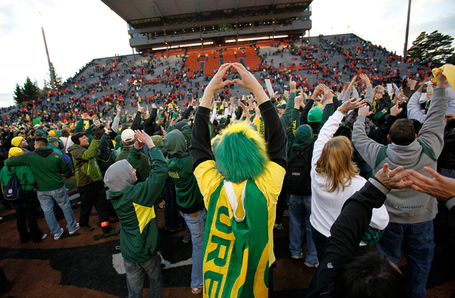 At least three of the BCS top four need to lose for Oregon to get back into the national championship game. Oregon isn't jumping an undefeated team at this point, not even Baylor. Here's where those undefeated teams can fall:

Week 13: Alabama vs. Chattanooga - LOL, just kidding. God damnit SEC I hate you. Chattanooga?!? In November!??!? The answer is Baylor @ Oklahoma State - The Cowboys have won six straight since inexplicably losing to West Virginia at the end of September, and have road wins over Texas and Texas Tech in the last three weeks. Baylor might be my favorite team in college football this year, but they could definitely slip up here.

Week 14: Alabama @ Auburn - WAR DAMN EAGLE BABY! DO IT FOR THE TOOMER'S OAKS! If the Tigers have miracle passes on their side, then they can certainly unseat the Tide. Remember, Auburn very nearly lost to Washington State back in August. And now they're in the top 10. Football is weird.

Week 15: Not a god damn thing - The only team that plays is Baylor, at home against Texas. They aren't losing that game.

Conference Championship Week: Everybody but Baylor - If Baylor has won out, they're sitting at home hoping for upsets. Alabama, provided they beat Auburn, will face Missouri or South Carolina, and either team has the skills to pull off an upset. Ohio State will face Michigan State if the Spartans can win at least one of their last two games. Michigan State's defense can win a game by themselves, and Ohio State hasn't been the most reliable team this year. And Florida State could face some combination of Duke, North Carolina, Georgia Tech, Virginia Tech, or Miami. If you took the best players from those five teams, and put them on one ACC Coastal All-Sorta-Okay team, they'd probably still lose to Florida State by 17.

If Oregon wins out, they're headed to Pasadena. But if they want to play on January 6th instead of January 1st, they need some weird shit to happen.
Here's the full BCS standings, for your browsing enjoyment.