Ducks fail to execute in loss to Arizona

Oregon wasn't able to execute at all against an inferior Wildcat defense last Saturday. Were the issues with execution on the field, or did the problems come from the play calls?

Share All sharing options for: Ducks fail to execute in loss to Arizona

Last Saturday was painful for numerous reasons. Oregon not only lost its bid for the Pac-12 title, it lost big to an inferior opponent. But it wasn’t the actual loss that stung the most, it was the manner in which Oregon lost that set most Duck fans into deep self-reflection, and even caught the most rampant advocates of Coach Mark Helfrich and Oregon’s personnel base questioning whether or not the Ducks were headed in the right direction.

Over the past few years after Oregon’s handful of losses we’ve been able to say, "change one or two plays, and the Ducks win this game, perhaps handily." For example, if Oregon was able to hold onto the ball against LSU, if the offense came to play in the first half against USC, and if one or two more blocks or calls went our way against Stanford, Oregon would have at least been in better position to win each of Oregon’s previous losses.

But for some reason, Oregon’s two losses this season didn’t really feel close. Obviously if the Ducks had held onto the ball a bit better against Stanford they would have had a better shot, but honestly, Stanford dominated Oregon on both sides of the ball throughout the whole contest. If it weren’t for a streak of ridiculously good luck in the final ten minutes of the game or so, Oregon could have easily been shut out by the Cardinal.

Things felt the same way this past weekend against Arizona. The Ducks might have been able to move the ball a bit more effectively against the Wildcat defense, but again, the Ducks fell short in many ways on offense, and the defense was really put to the task by the Arizona offense. Again, the loss to the Wildcats really hurt the significance of the 2013 season, but also set Oregon’s credibility as a national contender back considerably.

Don’t get me wrong, the Ducks haven’t lost their talent, they are still one of the most talented and athletic teams out there, but it really appears that they have lost their, "killer instinct." The ideology and attitude that was set in place by Chip Kelly, whether it be the emotional and mental influence that Kelly had, or the actual strategical edge Kelly brought to the offense, has seemingly faded away over the course of two emotional losses.

For the sake of reasonability, I won’t question how Mark Helfrich is preparing his team for game day. I can’t prove or disprove that Helfrich has maintained the routines that Chip Kelly put in place before games to prepare the team both physically and mentally. One would imagine that with so much of the staff returning after Kelly’s departure that the staff took the, "if it ain’t broke don’t fix it," mentality for scripting practice and pre game routines.

The one area that we can show differences is on the field, and even more specifically, in play calling.

Chip Kelly was a master at play calling his offense. In some instances, seeing what Kelly would was as simple as taking a look at how a defense was aligned. Six men in the box meant run, seven men in the box meant pass. Not enough defenders on the outside meant bubble screen. Two safeties deep not only meant run, it meant big run.

To Helfrich’s credit, the Ducks have stuck fairly true to those rules this season, it’s just that a schematic advantage has not always produced good results or execution. That point was shown to an extreme degree last Saturday in Tucson.

Let’s take a look at one play that shows not only a physical disadvantage, but a potential issue with play calling as well: (Click HERE if GIF is not working for you)

At first glance, this really just seems like a play in which Oregon didn’t block very well. The Arizona linemen got into the backfield quickly and contained the outside edge before De’Anthony Thomas got a chance to do anything in the open field. But if we take a look at this play frame by frame, there is a critical error, either made by Marcus Mariota, or by the play caller. 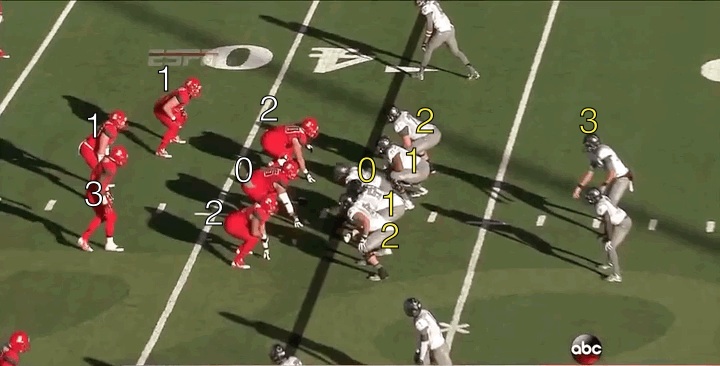 In the image above, this is Arizona’s base defense against Oregon’s base offense. The number on each player corresponds to their responsibilities on the play. Right away, you can see that this sweep play plans to block the nose guard with the center, the defensive ends with the tackles, and leave the two play side linebackers to the pulling guards. The quarterback is responsible for "blocking" or reading the backside linebacker (labeled with a three). 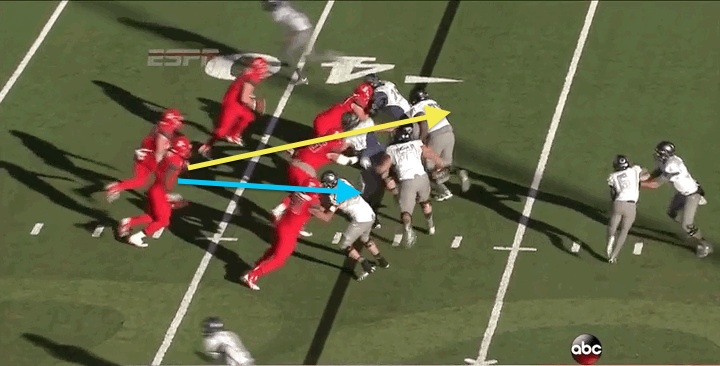 At the mesh point, we can see the two guards on their way to the exterior to block the linebackers and we can also see Mariota preparing to make his, "read." I put the word read in quotes because I can’t prove or disprove that Mariota is actually making a read on this play. It’s basically been proven that a good share of Oregon’s running plays are not read plays at all, but designed hand-offs to the running back. If Mariota indeed was reading the defender on this play, he makes the incorrect read. But after looking at the next frame, Mariota probably wasn’t reading that defender. 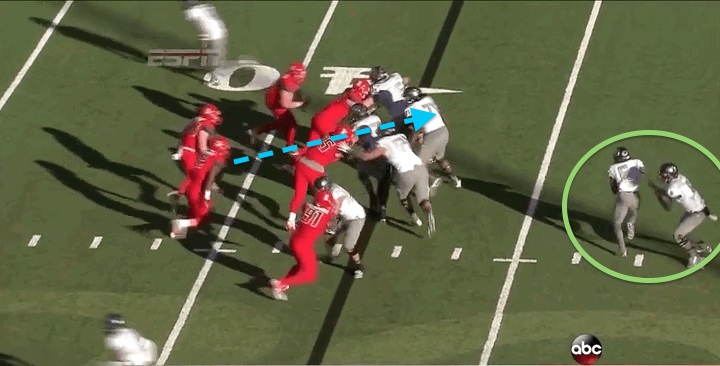 Mariota actually doesn’t really ride the mesh point at all, he immediately gives the ball off although he is looking directly at an open gap. The backside linebacker has already turned his shoulders to crash down to the running back, shown by the blue arrow, and his ability to pursue Thomas from behind forces Thomas to reverse field to no avail.

The Arizona defense literally sold out on Thomas keeping the ball, as all of their linebackers sprinted right towards the running back instead of maintaining their gap integrity. If Mariota had kept this ball, he likely would have gotten a big gain, simply because of how open the middle of the field should be following that kind of pursuit from the defensive front.

There are a couple of things that could have led to him not keeping the ball. To start, he simply could have just made the wrong read and used poor technique at the mesh point to keep the defense honest. Or, this play wasn’t a read play at all, which I feel is the more likely case considering Mariota’s injured state.

In that case, the play calling in this situation can definitely be criticized. If Mariota isn’t healthy enough to contribute in the read game and the defense isn’t covering him to a considerable degree, then Oregon shouldn’t be calling read plays. There are a few other plays that can be used if the quarterback isn’t a threat to run the ball that would be equally effective against Arizona’s scheme.

One of those plays is the power play shown below:

On this play, everything seemed to be in place, the linemen pinned down one side of the defensive line while a pulling guard kicked out the backside defender. But for some reason, Thomas decided to not follow his blockers and the last second and bounced the ball outside. Of course, Thomas ended up getting a few yards out of the play, but if he had followed the designed play, Oregon probably would have picked up the first down.

The backfield wasn’t entirely to blame for the lack of a running game though, as shown in this sweep play below:

Notice how Oregon’s center Grasu pulls out to block the exterior on this play, leaving the defensive tackle in front of him unblocked, presumably to be read on a midline read play. For some reason, the play side guard ended up blocking down on the defensive tackle instead of heading to the second level where his block would have actually had an impact on the play. You can tell that the block was not supposed to occur on this play because literally every other block is swept to the play side using typical zone blocking technique.  If Mariota had a designed read of the defensive tackle on this play, the block most likely confused his read, forcing him to hand the ball off.

In fact, all throughout the game, Arizona did a good job of delaying Mariota’s reads, particularly in the red zone.

This inside zone read came after a big play and was quickly ran without making a read on the defense. Here, Mariota doesn’t get a full look at his read man until he’s already handed the ball off. Of course, that read man made the tackle as he sold out to stop the running back.

Whenever Oregon got the ball down the field, they weren’t able to score until Mariota was able to utilize his feet, mostly through play action, which took some of the pressure off of the running game. When it was all said and done though, Oregon’s offense was not prepared for this game. They made simple mistakes throughout the contest both in play calling from the press box and on the field. Regardless of whether or not Mariota was ready to run the ball against Arizona or not, the Ducks didn’t do consistent work against the Arizona defensive front and could not start much of anything against the Wildcats.

If these issues with decision making and execution continue, these poor performances and embarrassing losses will as well.