I'm getting on a plane at 5:30am to head down to Sin City for 4 days, 3 nights, 11 basketball games, and a hell of a lot more fun than a man my age with my responsibilities should be allowed to have. Then again, isn't that the reason everyone goes to Vegas? Well, here I come!

If you're unfortunate enough to have to work today, make sure you log in to your cable provider's Pac 12 streaming network as all of today's games will be broadcast there. If you're working and don't have the Pac 12 Network, then that's 2 bad life choices you've made.

If you're one of the smart ones that called your boss and told them you have explosive diarrhea so you could watch college basketball all day (cause let's be honest no one ever questions you if tell them you're sick with explosive diarrhea) then sit back grab your medicine and get ready for a day of buzzer beaters, upsets, dreams come true and dreams crushed as March Madness is fully upon us.

12:00pm - #8 Stanford vs #9 ASU - You have to love the idea of starting off the Pac 12 tournament with what looks like one of the most competitive matches of the day. Stanford is coming off a big time win against their rival Cal on the road, while the Sparky's have lost 4 straight. Stanford will have their hands full trying to contain freshman guard Jahii Carson, while ASU's front court will have to contend with Stanford's big man Dwight Powell.

2:30pm - #5 Colorado vs #12 OSU - A rematch of a game the Beaver's took on Saturday pretty handily on the road in Boulder. The big story for this game will be the return of Andre Roberson to the Colorado line up. The conference defensive player of the year missed the last 2 games with mono like symptoms, but as the #12 team with nothing to lose and no other post season to really play for, it would be just like the Beavs to go out and win the whole damn tourney.

6:00pm - #7 USC vs #10 Utah - The second act on the first day should start off with a bruising battle down low. Utah's Jordan Loveridge and Jason Washburn will try and build on their upset win over Oregon with an upset over a USC team that is down 2 players because of a post-game brawl in Spokane last weekend.

8:30pm - #6 Uw vs #11 WSU - It's the Apple Cup Part III. May not be as exciting as the Hangover Part III, but will probably provide just as much derp. The huskies swept the Cougs in the regular season, but then again who didn't (oh... sorry Ucla) but the Cougs are coming in off back-to-back wins against the LA schools. Oregon fans should pay close attention to this one as the Ducks will have the opportunity to take on the victor tomorrow evening. So I think I speak for everyone when I say, GO COUGS!

Here's a full copy of the bracket, use the space below to talk about the games going on around the country today. Me, I'm off to find Wayne Newton 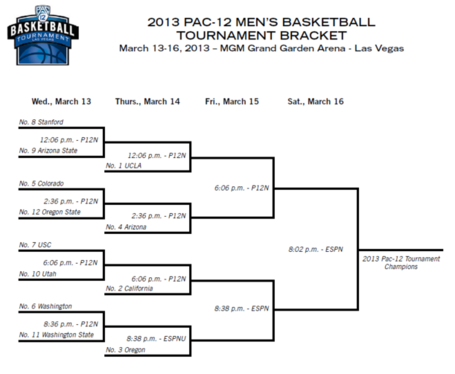