Many of you know this story, but some of you might not, and since I love telling it...well, here it is again!

About a month ago, my youngest son turned three years old. We threw him an Angels party, since he loves baseball and the Angels are his favorite team (that's my boy!). He's been watching his two older brothers play on baseball teams for over a year now, and it's safe to say that insanely jealous doesn't really begin to describe it. So for his birthday, he got his own set of gear - a baseball bag, his own helmet, and, the crown jewel of the collection, his very own bat. We immediately went outside and I pitched to him until he could barely hold the bat up any more. He would hit the ball and run all the bases, yelling "homerun!" when he crossed the plate. 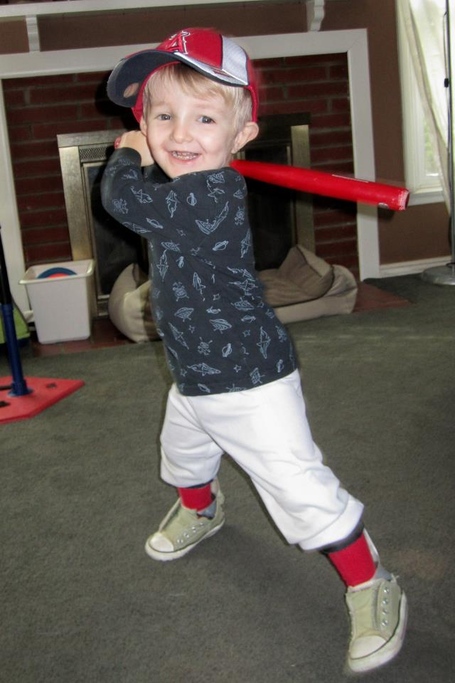 It was a fun day, but, I imagine, not all that different from a lot of other little boys who turn three. Maybe it's not always baseball, but most three year old boys run around on their birthdays playing superheroes, or dinosaurs, or Ninja Turtles. The thing that makes this particular party notable is that no one thought my boy would ever run. Most thought he would never walk. In fact, many thought he would not even survive birth.

My son, Wyatt Lynn Flude (W.L.F. or "Wolf" as we sometimes call him), was diagnosed prenatally with a disease called Osteogenesis Imperfecta, also known as O.I. or Brittle Bone Disease. It's a rare condition, most often caused by a random genetic mutation, that involves a deficiency in the body's production of collagen. There are a wide range of severities, from the very mild, resulting in someone breaking a few more bones than normal, to the fatal, resulting in death during or shortly after birth. Wyatt's ultrasounds showed femurs that were very bent and probably broken. They showed a rib cage that would probably not be big enough to enable necessary lung growth. An expert told us that Wyatt's case was severe, and that he would most likely not survive more than a few days after he was born. We were advised by several doctors to strongly consider terminating the pregnancy.

We decided against it. And by the grace of God, our little Wolf was born as a whole, unbroken, healthy baby boy on March 17, 2010. He had no broken bones and his lungs were just fine. Since that day, it's been (mostly) one miracle after another. He did break his femurs about three weeks into his life, and he cracked his skull just before he turned one. But other than that, he's been incredibly healthy. He started walking at around 18 months old. He started swinging a baseball bat roughly three seconds later. And he's been swinging one ever since. He's small for his age, and always will be, although it's hard to tell how that will turn out. His femurs are still very bent just below his hips, and many doctors have told us that they will break again eventually; at that point, he would need metal rods inserted to strengthen them. He wears ankle braces most of the time. He currently receives treatment every two months with a medicine called Pamidronate that helps strengthen the bones and relieve minor bone pain. But none of this is important in the grand scheme of things. He's a growing, smart, adorable little guy and we love him dearly. 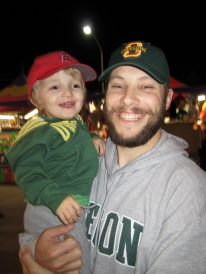 Shortly after Wyatt was born, I shared my story with the people here at ATQ. The outpouring of support was unbelievable. Matt (Matt Daddy) and Will (WillRubin, formerly Axemen), along with quite a few others at the blog, organized a fundraising drive involving the auctioning of Duck memorabilia to raise money for the OI Foundation. Some funds were also used to provide scholarships to send people from the Portland area to the OI Foundation Conference. That conference is a HUGE deal for a lot of people, as they are able to receive support and education for their condition, as well as the opportunity simply to hang out with others like them. It was a fantastic effort by ATQ, and I get a little misty-eyed every time I think about it. (Matt gets a little misty-eyed too, since one of the items auctioned was a Chip Kelly-signed football; to his chagrin, my parents won the bid and gave it to us; here's a picture of Wyatt holding it at a couple months old.) 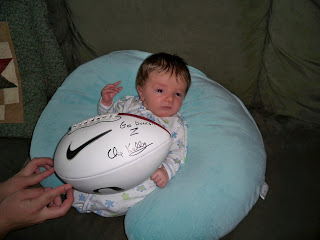 To my family's continued amazement and joy, ATQ has made additional efforts to help support the OI Foundation. We had another successful fundraiser last year, and we're doing it again. While my little Wolf has been blessed with great health and a fantastic outlook, there are others living with this condition that are not so fortunate. Research is being done constantly about how to treat the disease. And a support network is crucial for those who deal with it. Any support you can give in this drive is appreciated.

The community we've built on this blog is fantastic. I can't express in words (even though I've tried) how thankful I am to be a part of it. And how encouraging it is to know that the people here care so much about me and my family. I think the best thing to do is let Wyatt show off some of his skill and say a very brief message. Thanks again!