Full disclosure: Dennis Dixon was #1 on my personal Top 20 list.

Does Dennis Dixon have the most impressive credentials, the most illustrious career, or the most frightening measurables? No. Is he the best quarterback Oregon has seen? No. Was the "Dixon vs. Brady Leaf" argument an actual thing for a while? Yes. But it's my list, and #10 is my #1 because Dennis Dixon is magic.

The Michigan Game was magic.

The stats say Dennis Dixon went 16/25 passing for 292 yards and three touchdowns. But the legend of Oregon's 39-7 win over Michigan at The Big House, just a week after the Wolverines had been shocked by Appalachian State, is something much larger than those stats.

The week prior, Oregon beat Houston at Autzen Stadium. You might remember this as the one where The Duck elbow-dropped and face-humped the Houston Cougar. But that game also featured two Dixon moments, neither of which can be found on the Internet, that set the seeds for something special. The first was an 80 yard, untouched rushing TD on a perfectly-read zone read. The second? Dixon scrambled out of the pocket, saw nothing, and threw the ball away. HE THREW THE BALL AWAY! After screaming at him all year in 2006 when he'd either force a pass into traffic, or run out of bounds for a three yard loss, this was better than Christmas.

Back to The Big House, the first quarter, and the second-best pass I've ever seen Dennis Dixon throw.

A 50-yard flick of the wrist that hit Brian Paysinger perfectly in stride for what would become an 85 yard touchdown strike. That first-quarter throw gave Oregon the lead for good.

His game was magic.

If Marcus Mariota is the finished product, Dennis Dixon was the beta release. His release was quick and compact for a lanky guy, and he could certainly get the ball there in a hurry if he needed to. He was sneaky-elusive in the pocket; you'd think with the multitude of gangly limbs waving around, a defensive lineman would be able to get ahold of one of them. He ran like a giraffe on a bicycle, and man was it fun to watch. He didn't come to Eugene to run Chip Kelly's offense, but he ran it like a tornado. He led Oregon to back-to-back wins over top-10 teams with a skeleton crew of wide receivers and a gallon of scrappy.

The Chip Kelly effect was magic.

In 2006, Dennis Dixon was an inconsistent bundle of nonsense. He threw nineteen picks against Cal, and wasn't good enough to wrest the starting job away from something called Brady Leaf. Chip Kelly arrived on campus, and Dennis Dixon became a video game character. Watching Oregon run the read-option with Dixon, a quick offensive line, and a first round running back, when the rest of the country had absolutely no clue how to stop it, was just unfair. Oregon's offense put up 465 rushing yards on Washington, and the Huskies defense was chasing three players around the field at any given time because they had no idea who had the ball. Andre Crenshaw rushed for 113 yards in that game. Yeah, that Andre Crenshaw.

His value was magic.

I still maintain that the way Oregon played after Dixon got hurt should have won him the Heisman. Dixon was a final straw in a string of major injuries, and when he went down, the team fell apart. Three straight losses, including a shutout at the hands of an aggressively mediocre UCLA team, and an overtime loss to the Beavs at Autzen. Dennis Dixon was more valuable to his team than any other player on any other team in 2007, and the fact that he didn't even get a courtesy invite to New York is almost as ridiculous as Marcus Mariota not getting an invite in 2013.

I'll leave you with the story of the greatest pass I've ever seen Dennis Dixon throw.

It didn't come at Autzen Stadium or at any other Pac-10 football stadium. In fact, it didn't come while he was a member of the football team. It was at MacArthur Court, in 2009. Oregon was playing Arizona in basketball. The Ducks lost, 77-74, but know that I had to look up who won, and who was playing. It's that inconsequential to the story.

Dixon was taking in the game as a newly-minted Super Bowl champion, giving hugs and high fives to fans during breaks in the action. 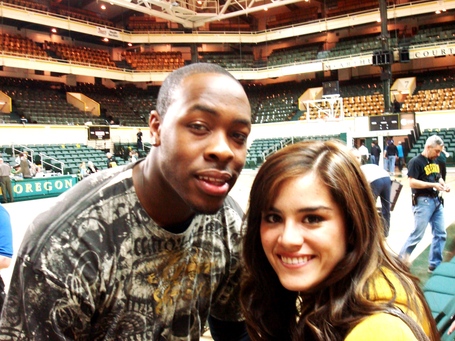 During a timeout, the cheerleaders started T-shirt gunning clothing into the crowd, and one of them gave a shirt to Dixon to throw to his fans.

Dixon stands up, looks, and finds his target in the front row of the highest rafter of Mac Court. In case you've already forgotten, MacArthur Court was four stories tall, and basically straight up. If you dropped, not threw, an M&M from the top deck, you could hit the court. Throwing something from the floor to the rafters isn't an angle one normally throws anything. But Dixon found his man, four stories up. So in a T-shirt, jeans, and Timberlands, without any warmup, he pointed the guy out, cocked back the loosely wound cotton projectile, and fired a laserbeam into the sky, drilling the guy right in the chest. He gave a wave, and sat back down in his seat, as if this wasn't a near-impossible thing he just did. We lost our shit.

Not hyperbole at all, it's one of the five greatest things I've ever seen.

And that's why Dennis Dixon is magic.

To celebrate the 20th anniversary of Kenny Wheaton's cutback into history and the 1994 Rose Bowl team, Addicted to Quack is counting down the top 20 football Ducks of the last 20 years. Our list so far...