In our weekly preview of the offense Oregon will face in the upcoming weekend, we look at the Wyoming Cowboys who are struggling to find a spark after the early departure of their star quarterback after last season.

Share All sharing options for: Wyoming Offensive Preview: Cowboys have big boots to fill at quarterback

After an epic collision between two top 10 opponents last weekend, the No. 2 Oregon Ducks are gearing up for their final tune-up game before Pac-12 play opens next weekend. This week, Oregon faces the Wyoming Cowboys, who are off to a 2-0 start under first-year head coach Craig Bohl.

The Cowboys offense hasn’t been too exciting this year, putting up just 17 points in their first two games. However, thanks to a stellar defense, 17 points got the job done for Wyoming both times as they defeated Montana 17-12 and Air Force 17-13. Below are Wyoming's offensive numbers and team stats so far for 2014. 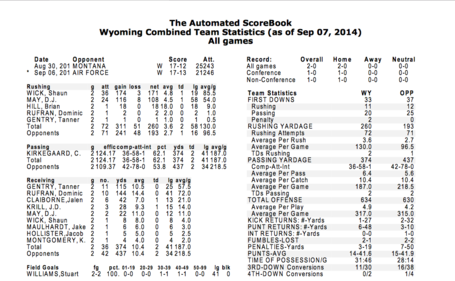 Without much further ado, let’s take a look into Wyoming’s offense.

At quarterback, the Cowboys are led by redshirt senior Colby Kirkegaard, a transfer from Phoenix Community College. Kirkegaard steps in to replace Brett Smith, who left Wyoming early to pursue the NFL. Spoiler alert: It ended with Smith going undrafted. As of late July, Smith had been signed to the practice squad of the CFL's Toronto Argonauts, but a look at their roster today confirms that is no longer the case.

Just look at Smith's bio on the Wyoming page, and you'll see what a huge hole the Cowboys now need to fill at the most important position on the field.

Kirkegaard had a career day against Air Force last week, completing 23 of 37 passes for 282 yards and two touchdowns, including the game-winner with 58 seconds remaining. The touchdown pass capped of a 9-play, 75-yard game-winning drive for the Cowboys. On the season, Kirkegaard had completed 62 percent of his passes, throwing for 374 yards, two touchdowns and one interception.

Wick will be the primary go-to guy for the Cowboys in the backfield. In the season opener against Montana, Wick had a big day with 134 yards and a touchdown. Last season, Wick ran for 979 yards and nine touchdowns. In 2013, Wick had four games in which he ran for over 100 yards, including a career-high 234 yards against San Jose State, good for 22nd on the NCAA all-time single game record list.

Kirkegaard has a couple of targets at wide receiver who are off to a good start this year. Senior wideout Dominic Rufran leads the team so far with 144 yards in 2014. In 2013, Rufran had over 100 receiving yards in a game four times. This year, he’s been named to the Biletnikoff Award Watch List for the second straight year.

Who to watch for

Much like Michigan State, I believe Wyoming’s talents on offense lie in the backfield, primarily on the shoulders of Shaun Wick. He’s shown time and time again he can break out for big 100-plus yard games. While Wyoming won’t be as much of a pushover as South Dakota (the Ducks are favored by “only” 44 points as of this writing), this will be another game that gets out of hand fast, forcing Wyoming to go to the air often. But in some hypothetical world where the Cowboys are able to keep pace with the Ducks, Wick would be the X-factor if he had another 100-plus yard day in him.