Wyoming vs. Oregon: The X's and O's

Share All sharing options for: Wyoming vs. Oregon: The X's and O's

What hangover game? Just a week after Oregon came back from a first half deficit to defeat the Michigan State Spartans, the Ducks came out and took care of business against a scrappy Wyoming team, even though the Cowboys hung around for a quarter. At the end of the day, Oregon had a 48-14 win under its belt and a 3-0 record. Here are a few of the plays that stood out.

In the first quarter of the game, Wyoming took advantage of a Oregon defense that looked like it had drank a little too much the night before. The Ducks allowed five first downs to an average at best Wyoming offense, including four conversions on third down. The worst of these conversions came with a few minutes left in the first quarter, when the Cowboys were faced with a 3rd and 20.

Oregon lined up in a cushion man, 2 deep zone nickel look, where the three corners gave their receivers comfortable margins off the line. The two safeties were extremely deep and looking to keep any Wyoming receiver in front of them, a common practice when a team has to pick up a huge chunk of yards. 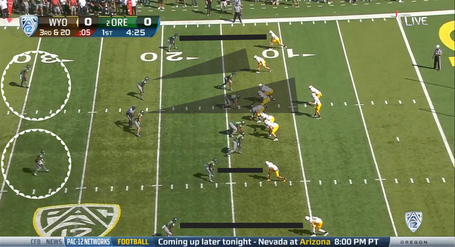 Wyoming came out and ran multiple routes down the field. The two receivers split out to the left side of the formation and ran a crossing route sending #83, Jack Maulhardt, on a route down the middle of the field. 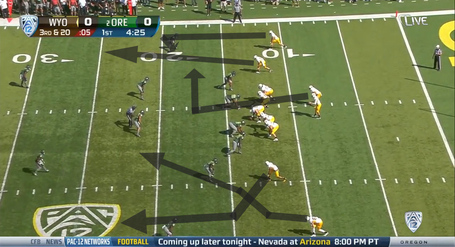 The key to this play is the space Chris Seisay gave to Maulhardt as the play began, and the conservative way the two deep safeties approached the play. As the slot receiver cut to the sideline and his receiver ran down the middle of the field, Seisay gets caught for a second on the slot receiver's pick route, leaving him a step behind Maulhardt. 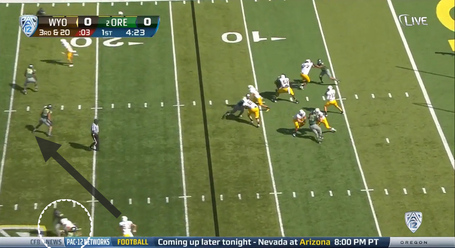 Couple this with the fact that the safeties began the play 20 yards downfield and backpedaled at the snap to pick up the outside receivers running deep routes, and Kirkegaard has enough room to put a pass on Maulhardt's chest to pick up the first down. 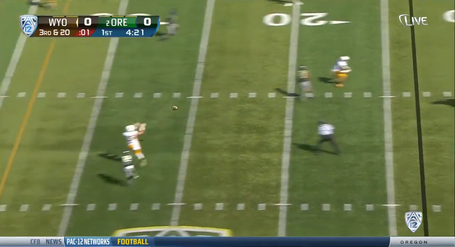 This was a great call by Wyoming and very conservative defense by Oregon, leading to a 24-yard completion and a huge play on the way to the Cowboys first touchdown of the game.

With the game tied much later in the game than expected - albeit, early second quarter - Marshall broke a long touchdown run out of an interesting formation and play.

Oregon came out with an empty backfield and five "receivers" split out, with three bunched out to the right and two out left. Receivers needs quotes in that previous sentence because both Royce Freeman and Byron Marshall are on the field. 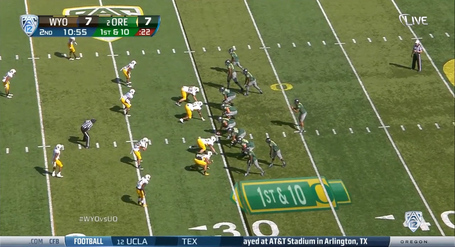 As the ball is snapped, Marshall loops back into the backfield and takes a handoff from Mariota. With the three receivers out right and the two pulling linemen, Marshall has more than enough help set up in front of him. 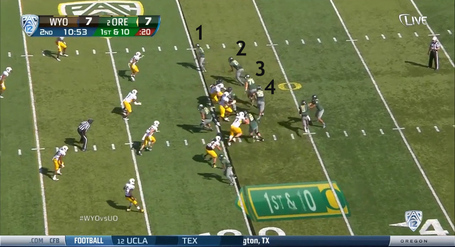 This run was sprung by a couple big lead blocks from these four. First is Hroniss Grasu who cuts the linebacker in pursuit with a great block. Secondly are the blocks made by Charles Nelson and Royce Freeman creating a seam for Marshall to hit down the sideline. 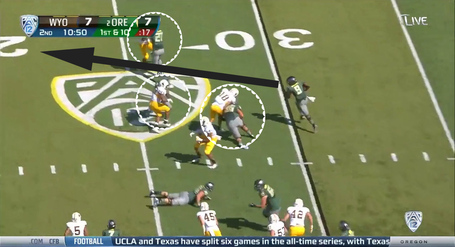 Once Marshall hits the gap, it's just daylight between him and the end zone.

After Marshall's touchdown run, the Ducks began to settle in defensively. After they forced Wyoming into a punt on their first possession of the second quarter, Oregon came back out and got right back at it.

Oregon came out in a disguised look, with Dargan and the nickel corner feigning a blitz package. This look makes Kirkegaard call an audible at the line, assuming he will have some pressure on him and limited coverage. 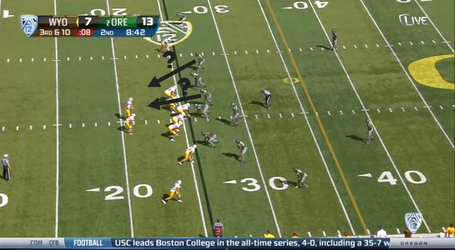 Right before the snap, Dargan drops back into a deep three zone with the other safeties. Oregon actually dropped eight in deep coverage despite the initial blitz look. 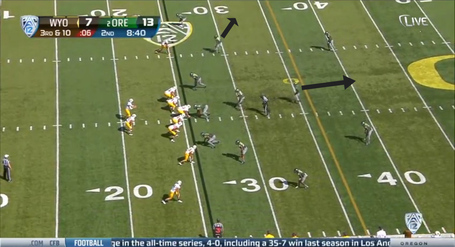 The biggest factor of this play is the pressure Oregon is able to generate with only three rushers. Kirkegaard is forced to step up into the pocket and take his eyes off of the coverage momentarily. Kirkegaard has an open check down available, but with the down and distance being 3rd and 10, he tries to force a pass downfield. 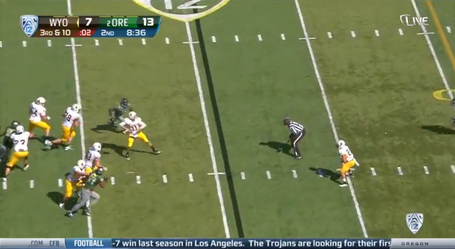 Kirkegaard sails the pass and Dargan ends up with one of the easiest interceptions he'll ever have.