South Dakota vs. Oregon: An X's and O's Breakdown

Share All sharing options for: South Dakota vs. Oregon: An X's and O's Breakdown

One week down, one blowout win in the books. Oregon defeated South Dakota 62-13 this past Saturday, starting the Ducks season off on the right foot. South Dakota was able to march the ball down the field decently well, but they were no match for Oregon on the other side of the ball, where Oregon was able to rack up 673 yards on the Coyote defense. Today we're going to look at a few of the big scoring plays the Ducks converted. While the defense was shaky at times, it did not end up mattering much in this game so we will leave the defensive analysis for later weeks.

With Oregon already up 8-3 halfway through the first quarter, the Ducks took to the field for their second drive and got right back to business. On the third play of the drive, Oregon came out in a three receiver set, which the Coyotes matched with a man-to-man, cover 2 shell. 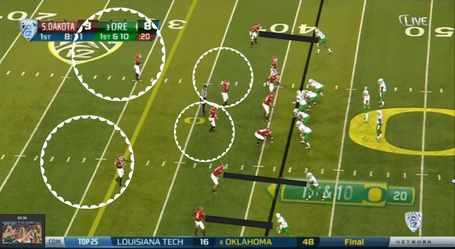 Once the ball is snapped, Mariota and Tyner began a standard read-option look. This drew the attention of both of South Dakota's linebackers as well as safety Jacob Warner, circled here. While Warner is supposed to help with run defense, his main priority should be Marshall flaring out of the backfield. 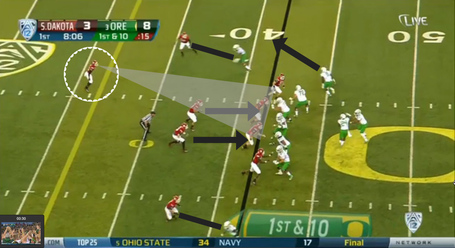 With the play action done, Mariota looked upfield for potential targets. Once Warner realizes the play is not a run, he correctly dropped back to pick up a receiver. He read Mariota and dropped straight back, picking up Darren Carrington who was running a fly route down the middle of the field. But with Warner picking him up and the corner still running man on him, Carrington is double teamed, leaving no one near Marshall sprinting out of the backfield. 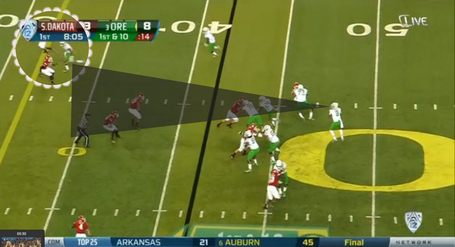 Mariota realizes the mistaken double team and found the wide open Marshall out to his right. The separation created by Mariota looking off Warner is too much room for him to make up. 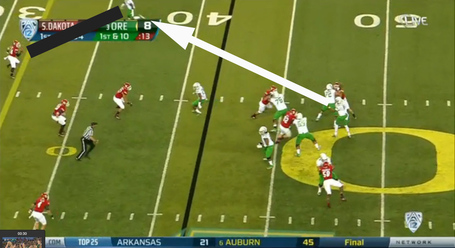 Once the pass is completed, it's just a footrace with Marshall having about a five yard head start. I don't know about you, but I'm taking Marshall in that situation 100% of the time. 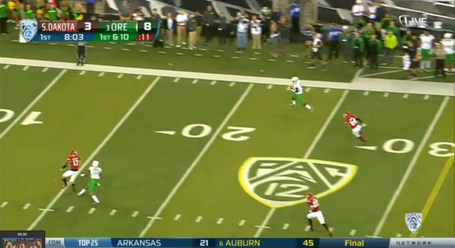 Oregon uses this three wide receiver, two back set to create mismatches all over the field. With the speed the Ducks possess across the field they know if they can force defenders to make decisions quickly, they can press opponents into making mental errors, like the one above, and cash in on an easy six points.

Early in the fourth quarter with the game well out of reach, the Oregon second offensive unit was in the game. With 2nd and goal from the 4-yard line, the Ducks came out with the same three receiver, two back set as the play above. The play began the same as the one above, with a read-option look. This time, however, it was not a play action look, but an actual read for Lockie to make. Since the read defender (the unblocked man coming in off the right edge) crashes in on Marshall, Lockie opts to keep it himself and set up the second phase of the play. 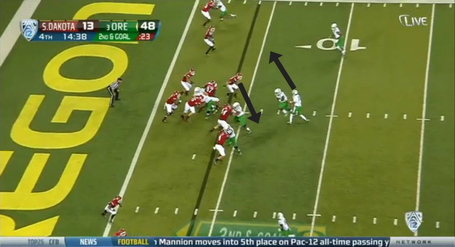 After Lockie made the initial read, he set up an option with Pharaoh Brown at the top of the screen. With the receiver taking the far corner out of the play, the option becomes a two-on-one scenario that is nearly impossible for the defensive back to play. The defender comes down to cut off Lockie's run to the end zone, which left the pitch man, Pharaoh Brown, open off the top of the image. 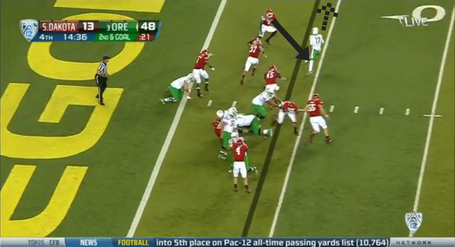 Lockie is able to get the pitch off before he is hit, and it's an easy scamper into the end zone for Brown. 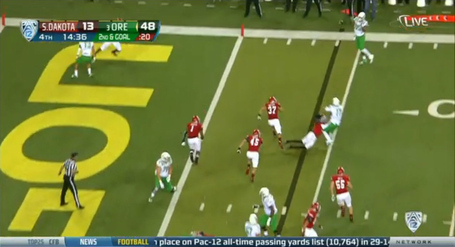 Hey what do you know, a three receiver, two back set yet again. This play came in the second quarter, with Oregon up 21-6 and looking to add to their lead. 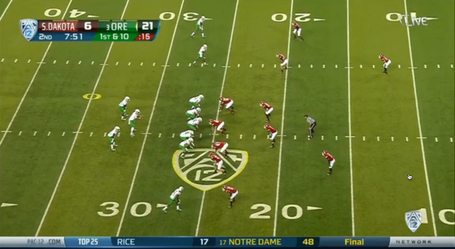 Mariota began the play with a read-option with Freeman. The read defender stayed put on Mariota, which led to Mariota handing the ball off the Freeman. 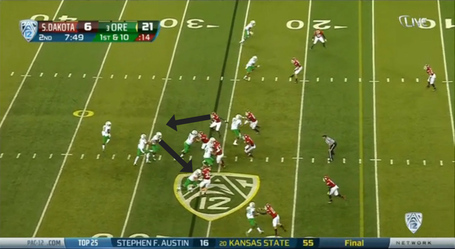 The offensive line did a great job of sealing the end of the line for Freeman to reach the edge. An element of plays like this that often gets overlooked is the play of the wide receiver on the side of the field the play is run. Dwayne Stanford began the play at the bottom of the screen, and runs an in route. This brings the corner, who thinks he has a pass to defend, in with Stanford, opening up the sideline for Freeman to run free. 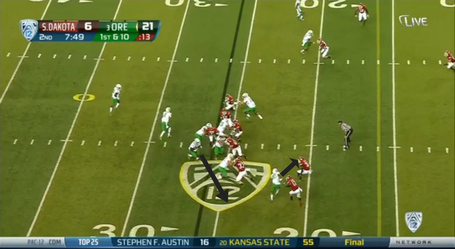 Freeman hits the edge and was gone all the way to the end zone for a Oregon touchdown. This set that all these plays are run out of seems like it is going to be a staple of the Oregon offense this year, mainly due to the possibilities of having two of their talented backs on the field at the same time, and because of the trust put into Mariota to run through multiple reads.

Next Tuesday, the breakdown of the Ducks game versus Michigan State.