Why must you be so un-unpleasant, Michigan State?

I've tried, all day I've tried. I've melted my visual cortex watching TV. I've scoured the dregs of the Internet. I've done my due diligence. My conclusion? There isn't anything to hate about Michigan State. They are wholly inoffensive, and it makes me sick.

For Oregon fans, it's easy to hate most college football teams when needed. We can unconditionally hate our rivals (Oregon State, Washington) with extreme prejudice, and without reason. We can hate conference foes (UCLA, Arizona, etc.), whom we see every year, and have built a catalog of memories, both good and bad. We can hate the traditional powers (Notre Dame, Ohio State, Texas) for getting the benefit of the doubt because they're old and have won before, while we're new to the big kids table, and aren't yet powerful enough to hog the gravy. We can hate the teams that have our number (Stanford, Boise State, LSU, Auburn) because it sucks to lose and they're mean for beating us. We can hate the champs(Florida State), because they're the champs. We can hate slimy teams that play dirty on the field (Boise State) and represent themselves poorly off it (anybody in the Fulmer Cup Top 10). We can hate teams with slimy head coaches (Louisville, Arkansas, USC), who leer at us from the opposing sidelines surrounded by recruiting violations and sex scandals. And you can even hate football teams for stuff their other sports teams have done (Duke). But Michigan State doesn't work for any of these categories. Let's take them one by one.

Traditional Power? While Michigan State has been a member of the Big Ten since 1953, and were one of college football's great powers in the 1950s and 60s, the Spartans have won only five Big Ten titles since their last national championship in 1966, one fewer conference title than Oregon during that span. They're a player in the college football world, but they aren't one of the few obnoxiously-elite programs.

One-sided history? Oregon's history against Michigan State is a pair of home-and-home series; first, in 1979-80, when Rich Brooks' Ducks split two games with the Spartans. Then, in 1998-99, when Mike Bellotti and Nick Saban coached to a draw. The home team is 4-0 in the series. And in fact, the Spartans have recently done a bit of beating up on the teams the bullied Oregon. Michigan State's last two games in 2013 were against Ohio State - whom Oregon hasn't seen since the Buckeyes beat Jeremiah Masoli's Ducks in the Rose Bowl, and Stanford. The Spartans beat them both, and I took great joy in both of those wins. And now I'm supposed to turn around and hate the enemy of my enemy?

Hate the Champs? Hardly, as we've outlined above. They are the reigning Rose Bowl champions, and are looking to get back to Pasadena as much as we are. But the Spartans aren't the media darlings that Florida State and Alabama are. They don't get the benefit of the doubt in the polls after a subpar performance. They're kind of like Oregon in that way. We both may be in the conversation for a national title, but we still have to earn it.

Skeezy Team? Despite being surrounded by tumult in the past decade (Tressell and Terrelle, Sandusky, Notre Dame's academic fraud), Michigan State has managed to stay out of major trouble. Their biggest program incidents were two fights involving football players at campus parties, in 2008 and 2009. Since then? As little bad press as you can hope for from a college football program.

Skeezy Coach? Often it's easy to hate a team because of their coach. But I've got nothing bad to say about Mark Dantonio. All he's done since arriving in East Lansing is win, making a bowl game in every one of his seven seasons. In 2010, he nearly killed himself with ballsiness, calling a fake field goal in overtime to beat Notre Dame, and then suffering a mild heart attack an hour after the game. And despite the fact that Dantonio is the Stannis Baratheon of college coaches, he surprised everyone by repping Rich Homie Quan during his team's Rose Bowl run last season, injecting some more fun into his ordinarily-dry demeanor.

Non-football bias? I mentioned Duke above because Duke basketball is polarizing, and because it's easy to hate Duke basketball so much that the hate spills over into other disciplines. But Michigan State basketball is fantastic. Tom Izzo (and his firecracker of a wife Lupe) was my dream choice for Oregon's head basketball coach when Ernie Kent was fired, and for good reason. Draymond Green is immaculate. Mateen Cleaves is a national treasure. If anything, the presence of Spartan basketball makes me think even more highly of the football team.

So what are we to do? We can't simply manufacture hate for hate's sake, that would be petty and inauthentic. But this seems like too big a game to treat like any other team we don't know anything about. This isn't South Dakota or Wyoming. This is the defending Rose Bowl champions, coming into our house to try and beat us. Ambivalence will not stand. You think quarterback Connor Cook is good enough to win in Autzen? Only the best, NFL-caliber quarterbacks can win in Autzen, guys like Kellen Moore, Kevin Hogan, or Nate Longshore. You think you're in that category Connor Cook? Think again. And your mascot looks like what would happen if Patrick Warburton were stung by a bee and put a toothbrush on his head. 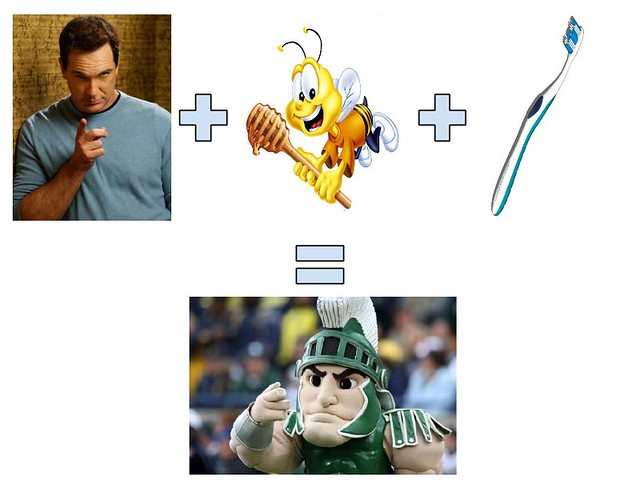 And whatever happened to the Spartans? Don't see many of them walking around today, do you? But do you see ducks? You bet your ass you do, and they're everywhere. They're in your ponds, lakes, and streams, in your Subways eating for free, and in your nightmares. And do think I'm going to stand idly by and let Toothbrush Warburton waltz in and take MY TEAM'S UNDEFEATED RECORD? HELL NO! YOU GUYS LOST TO NOTRE DAME LAST YEAR! THAT'S TERRIBLE! YOU SHALL NOT SULLY THESE HALLOWED GROUNDS WITH ANCIENT TACTICS AND EXTINCT CIVILIZATIONS! YOU CAN TAKE THAT 6TH CENTURY BC NONSENSE BACK TO MICHIGAN, AND COME BACK WEARING MORE THAN A SKIRT AND SOME SHOULDER FRINGE!

Yeah, you're right. Just doesn't work. Feels forced, and flimsy. My heart just isn't in the yelling the way it would be about Steve Sarkisian's lemur-face, or the fact that Michael Dyer is on his nineteenth college roster and somehow the NCAA thinks he's getting an education. We may just have to wait and see what happens on the field on Saturday afternoon. Unless there's some reason to wish ill upon the Spartans that I'm overlooking. If that's the case, you know what to do.