Oregon vs. Washington State: X's and O's by Dose

Every week we will be breaking down a few plays from the previous week's game. This week we will be looking at how Washington State was able to slow the Oregon offense, and look at the Duck's defensive miscues.

Share All sharing options for: Oregon vs. Washington State: X's and O's by Dose

Has there ever been one song that has so appropriately summarized a football game? Whether discussing the pressure Washington State was able to put on Marcus Mariota and the Oregon offense all night, or the lack of pressure that Connor Halliday and the Cougar offense felt throughout the game, it almost felt as if both teams were paying homage to Queen in this game.

Screaming, "Let me out!"

Let's look at how Washington State was able to frustrate the #2 team in the country on both sides of the ball for four quarters.

With the plethora of injures Oregon has suffered on the offensive line early in the season, it's no wonder Washington State decided the best way to slow the Ducks down was to bring blitz after blitz at the ragtag line and Mariota. The most common blitz tactic the Cougars used was a simple overlap zone blitz from the linebackers through the same gap.

On this play, Washington State blitzes two linebackers (circled in white) straight up the A gap, with the second blitzer taking a half step delay. They also disguised the blitz by having the outside linebacker drop back into zone coverage, and had the inside rusher take a wide, looping route to Mariota. 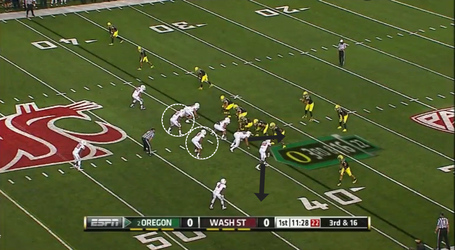 With this action, Washington State is able to confuse the Oregon line into doubling the man rushing wide because they assume two Cougars will be rushing the left side. When the second blitzer rushes, Hroniss Grasu is left to block two men by himself. 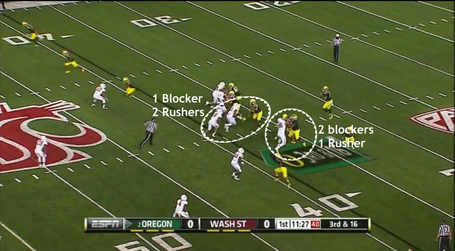 The pressure gets to Mariota quickly, and Oregon ran a slow developing play with only one underneath hot route, which amounted to the sack on this play.

Here's another look Washington State used to create pressure on Mariota and the Ducks:

On this play late in the second quarter, Washington State ran a delayed zone blitz with the defensive back lined up behind the outside linebacker. All four of the down linemen blitz a gap to the right of their original gap, while the blitzing defensive back shows coverage off of the snap. 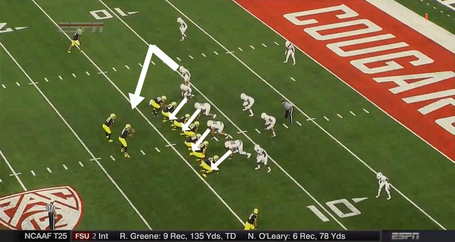 Oregon left tackle Tyrell Crosby - a true freshman - pinches in to double the linebacker when the blitz doesn't come immediately. 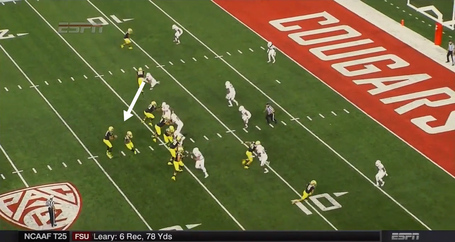 When the blitz does come, Crosby can't get over in time and since there is no back in the backfield to help with blitz protection, Mariota is left to scramble. He is somehow able to evade the sack, but is only able to throw the ball out of bounds, losing the down.

While these were both examples of well drawn up blitz packages, there were also times when Washington State simply overpowered the Oregon offensive line, driving linemen back into the pocket and taking away any breathing room Mariota had. Some of this was due to linemen errors, but the first half of this game was not one of the better called games of Mark Helfrich's Oregon career. However, Helfrich and his staff did make enough adjustments at half time to to help the Ducks get out with the win, which we will get to later.

But let's take a look at the other side of the ball, where Oregon really struggled to mount any pressure on Connor Halliday.

On Saturday Oregon defensive coordinator Don Pellum had a rough day. Playing against Mike Leach and his air raid defense with a Oregon defense that hasn't been great so far this season, Pellum had some choices to make. For most of the game Pellum chose to only rush three defenders at Connor Halliday, while dropping eight in coverage to handle the Air Raid, a plan Oregon clearly came into the game with.

The only problem was, the plan didn't really work.

Like they did for most of the game, Oregon lined up with four rushers at the line of scrimmage, but dropped one out as the ball was snapped to confuse Halliday and try to lure him into thinking a bigger rush is coming. However, when you very rarely actually send the fourth rusher, there isn't much confusion. 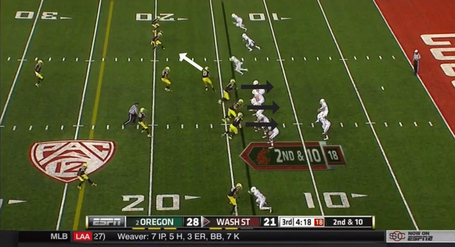 Once the ball is snapped Halliday stands in the pocket looking for receivers for five seconds, and even then there was no pressure to be found. Oregon does a pretty good job in coverage, but asking secondary to hold up for more than a couple seconds is an impossible task. Halliday snaps a pass to an open receiver along the sideline for a first down.

The other look Oregon ran along with the four linemen was a set where players in the box walked around, not committing to any particular gap or spot on the line. Only three rushed like usual, and the other three bailed out into middle zones across the field. 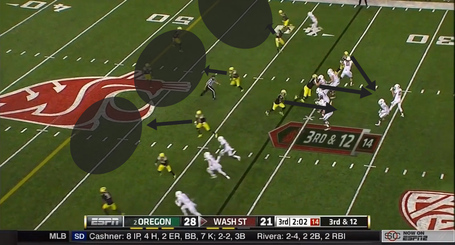 Since the defenders were up near the line of scrimmage, they were not able to get to their zones quickly. Halliday floated a beautiful pass behind the retreating Reggie Daniels and in front of Erick Dargan for a huge third down conversion.

Along with these plays were times when the secondary struggled with zone integrity or staying with their man. The worst offender was Dior Mathis, who Pellum really has to consider benching going forward, or at least bump him down to usage only in the dime package. While no one else in the conference plays quite the same Air Raid style, it will be interesting to see what Pellum does with this defense scheme going forward.

Now back to the adjustments Helfrich was able to make in the second half to cope with the Washington State pass rush. In the first half Oregon ran too many plays vertically down the field with Mariota stationary in the pocket, letting the rush become overwhelming. Once the second half rolled around, the Ducks adjusted by letting Mariota roll outside the pocket more, having him make quick, snap throws and only asking him to take three step drops on most of his throws.

Here's a quick pass to Lowe in the third quarter, where Mariota gets rid of the ball immediately after the play fake.

Washington State runs a near identical blitz package to the play above, where the two linebackers both blitz the A gap except this time Oregon is ready for it. They keep Royce Freeman in the backfield to pick up the second blitzing linebacker. 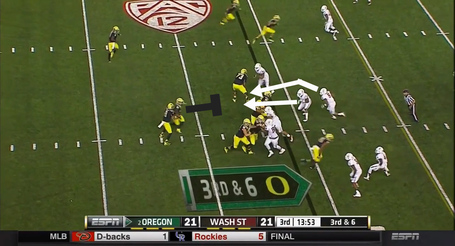 In addition to a solid blitz pickup, Mariota also has a much quicker read on this play. With Byron Marshall swinging out into the flats, the corner must step up into the flat zone, leaving Lowe open seven yards downfield on a little sit down route. The safety who is responsible for the zone Lowe runs to - the zone the linebackers vacated - can't get there in time and Oregon picks up the first down. 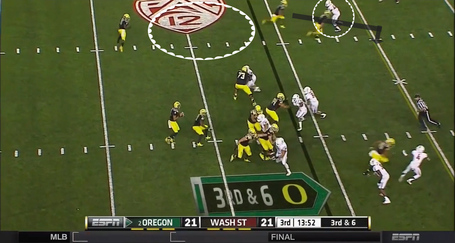 Another way Helfrich kept Mariota on his feet more in the second half was rollout passes. The logic is pretty simple, if your line can't keep the pocket intact, bail out of the pocket.

When the ball is snapped, the all of the linemen cut their man to the left. At the same time, Royce Freeman pinches back down to block the outside linebacker. 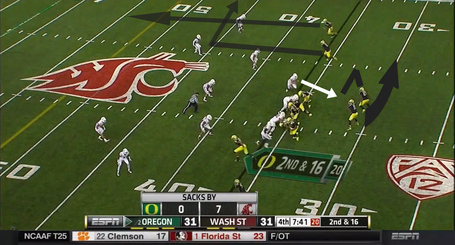 Devon Allen and Byron Marshall run a deep crossing route, which has the time to develop because of the rollout. With the safety unable to close out quickly enough on the out route, and the linebacker unable to drop deep because of the threat of Mariota running, there is a window for Mariota to drop a pass into Marshall. 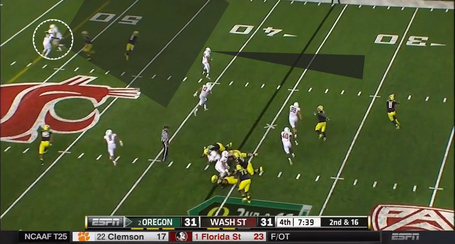 This 2nd and 16 conversion kept the drive alive, the drive that would eventually yield the game winning touchdown.