The Week 5 QuackPoll Huddles Together for Warmth

By conserving body heat, some of us may make it to December alive.

Share All sharing options for: The Week 5 QuackPoll Huddles Together for Warmth

This week was weird. It started with Kansas State handing Auburn a win on Thursday night. Saturday wasn't much better. Oregon looked shaky, Florida State played sans-Jameis, and Alabama let Florida score 21 points. 21 points! Florida scoring 21 is like Oregon scoring 80,000. But what would that do to the QuackPoll? Let's take a look.

The top 5 remains the same, but the gap between the teams has shrunk considerably. Last week, Oregon held a 27 point lead over #3 Oklahoma, and a 48 point lead over #5 Alabama. This week, those leads are down to 6 and 32 points, respectively. The Ducks also lost four first-place votes, two each to Oklahoma and Texas A&M.

I don't have anything to say about the following part of the poll, other than it looks funny. 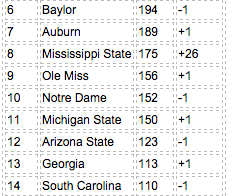 Check that out. Four different pas de deux, the teams switching back and forth so gracefully. And Mississippi State has crash-landed right in the middle of all of them. It's like Swan Lake, starring the Jabbawockeez. Very strange.

Drunk this week: Nobody. I know, it's like we all ran out of booze on Saturday night. But everyone's polls, power ranking or resume, makes at least a modicum of sense. I'm disappointed also.

Lazy this week: There isn't a clear lazy man this week either, because frankly I don't feel like digging hard enough to find one. Wait, that makes me the lazy man! Problem solved.

Sheep this week: Chris damn near hit the AP Top 10 on the nose, switching Baylor and A&M, and Michigan State and Notre Dame. Close counts in horseshoes, hand grenades, and the Sheep of the Week.